“The housing emergency has been one of the most prominent problems faced by citizens in recent years.” This was stated by Maria Assumpció Vilà, Ombudsman service of Barcelona, ​​in a round table on “responses to the emergency“, which opened the third day of the Barcelona Housing and Renovation Forum hosted at the MACBA.

The round table, during which various measures and actions to assist in cases of evictions and housing emergency were discussed, had the participation of Judith Cobacho, of the Service of intervention and mediation in situations of loss of housing and / or occupation (SIPHO) and Associació Vincle; Lucía Delgado, spokesperson of PAH (Platform for People Affected by Mortgages) Barcelona; and Fernando Díaz, representative of Cáritas.

The Ombudsman of Barcelona explained that when complaints arrive in their office they always represent “a thermometer of what is happening in the city”. In this sense, dealing with the housing emergency is one of the issues that most concerns citizens, along with the difficulty of accessing housing in Barcelona.

“Rents are very expensive and many people suffer because when they run out of rent money it is cause for concern.” In 2018, the Ombudsman service dealt with 442 cases of housing emergency.

Vilà highlighted the fact that in 2016 the Barcelona City Council modified the regulations for awarding emergency housing, taking into account some of the recommendations made by the Ombudsman service. “Our conclusions were a reflection of what citizens were sending us, and we brought them to the Assessment Committee.” This way, the reach of the social emergency cases was broadened.

“The shock measures that the municipal government took are positive,” added Vilà. Among these measures, she listed prevention and mediation in evictions, the detection of empty houses, acquisition of housing, pre-emption and retraction, and the expansion of rented housing pools, among others.

Vilà reminded that “the housing crisis affects vulnerable groups from both an economic and a social point of view” and added that “the availability of housing is basic and is the complement to social benefits.” For this reason, she demanded that the social housing provision be improved. “People must be able to have decent housing,” she concluded.

The municipal intervention and mediation service

“Evictions are a reality that is still nearly invisible,” began Judith Cobacho, from the intervention and mediation service in regard to the loss of housing and / or employment (SIPHO) and the Associació Vincle. According to data from 2017, Madrid tops the ranking for evictions with 3416, followed by Barcelona, ​​which in 2017 had 2519.

“It is not normal that we have this data in this country. Globally, evictions have come down, but this is not everywhere, because in some cities they have gone up, like Zaragoza, Valencia and Malaga. It is a very urban phenomenon linked to cities,” said Cobacho.

“Evictions are an act of very structural violence, which is aimed at very vulnerable people, who have had violated their right to housing, work, etc.,” she added. With the aim allocated to accompany people and intervene in these cases, SIPHO was created in 2015. Their service includes intervention, dialogue, and mediation functions between the parties involved, and also provides social accompaniment for families and preventive work.

Cobacho explained that every week a list of evictions is sent to the Housing Offices. “Every time we find out more about the cases that occur and we intervene more.” Cases where the eviction is carried out have reached more than 1200 during 2018, affecting more than 6300 people, with more than 2000 of them being children.

As for the distribution by neighbourhoods, the districts with the most evictions are Nou Barris (18%), Sants-Montjuic (16.23%) and Ciutat Vella (13.76%). The reason for eviction in 56% of the cases is rent, with only 5% due to mortgages. Squatting is the cause of 34% of eviction cases. The cases reach SIPHO through various ways: because the Housing Offices alert Social Services, as well as through the courts, and associations and social movements.

Cobacho also explained how the service works during the act of eviction. SIPHO offers assistance in eviction cases involving people who are at risk or are socially vulnerable. Last year, they were able to achieve 66% of evictions being postponed, while 17% handed over the keys to a home, and the eviction was executed in 13%. 4% of the cases were suspended.

Regarding challenges for the future, Cobacho pointed out that “we must consolidate the service, keep moving transversal work with social services forward, improve the protocol for preventive work with the TSJC, and define new strategies to be able to support households affected.” Finally, a video summary of SIPHO’s work was projected.

PAH’s response to the housing emergency

The PAH Barcelona spokesperson, Lucía Delgado, opened her speech by explaining that the PAH was created in 2009 precisely “as a response to the housing emergency.” The PAH responds to families that cannot pay their mortgage or are in the process of losing their home. “A handicap that we found is that even if the bank keeps the house, people deal with the debt for life,” she said.

Ten years later, the PAH held a meeting to develop new proposals to address the emergency and, ultimately, “to end its existence, because this would mean that the problem has been solved.”

“We have acted from the emotional, legal, media, and communicative fronts, all to encourage legal changes that respond to the violation of the rights of families,” added Delgado, also commenting that the PAH “denounces the reality and the causes of evictions, which are the lack of courageous housing policies, the fact that housing has been permitted to become a business, and the role of financial institutions.”

PAH vindications have been, from the beginning, “retroactive dation in payment, a moratorium for the payment of families, and the creation of a public offer of social rented housing.” Through their struggle, they have managed to end the invisibility of the problem: “This way, we were able to reverse the situation, switching from being guilty to being victims, and this was key for taking steps towards the conquest of rights.”

Delgado also explained the different campaigns carried out by the PAH in recent years and its commitment to “peaceful resistance,” and highlighted the organisation’s battle for a law of urgent measures to address the housing emergency. “For us, this law is a tool that must be created.”

Currently, in Barcelona alone, there are 10 evictions per day, 85% of which are due to rent. According to Delgado, people go to the PAH to find information that is not available from other institutions, and to have “collective accompaniment.”

The accompaniment of Cáritas in the housing emergency

Cáritas representative Fernando Díaz explained that the organisation publishes an annual report on various issues, and that since 2007 they have published four reports focused on housing. The latest one is from December 2018 and is based on both qualitative and quantitative data, some of which was extracted from a study by the Foessa Foundation.

According to this report, there has been a 40% increase in people suffering severe social exclusion throughout the State. 50% of these people also experience exclusion in regard to work and housing. For housing exclusion, he explained the different types of cases: people who are homeless and live on the street; people who are homeless and live in an institution; people with insecure homes; and those with inadequate homes.

According to Díaz, when housing emergency cases are detected, the first thing Cáritas does “[…] is accompany. We cannot give solutions but we can give support and advice.” In this sense, he gave the operational details of the integral accompaniment service offered to individuals, as well as of the Homeless programme, which helped in situations involving 1800 homes and 3000 people 2018.

During the Q & A session, the Councillor for Housing and Renovation Josep Maria Montaner took the floor, and explained that he was able to stop, that same day, an eviction in Sant Martí, thanks to an agreement made with the owner. This case occurred because the family, who paid 600 euros, was in a situation where the owner was now asking them for 1200 euros.

“We need to regulate rent increases, through a change to the Law on Urban Rentals, so that prices cannot be increased and cases like this are avoided,” Montaner said. 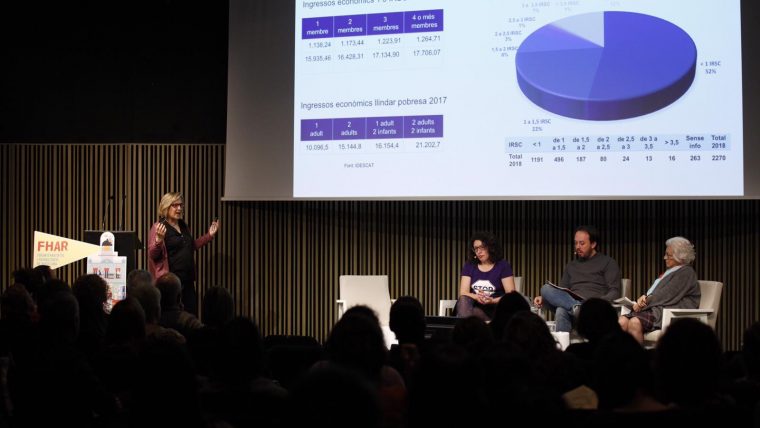 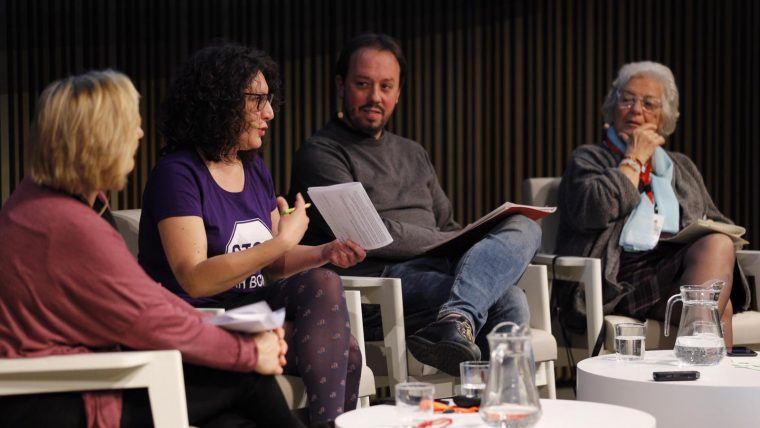 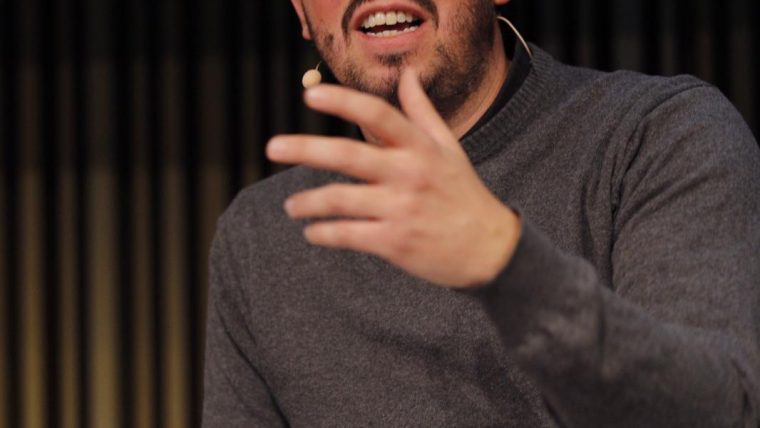 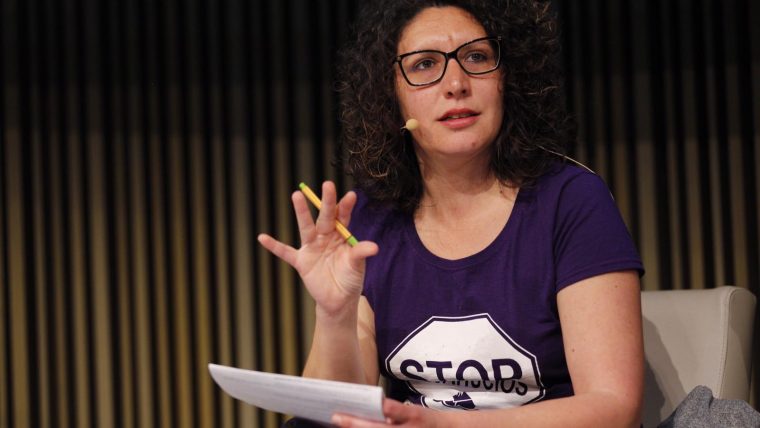 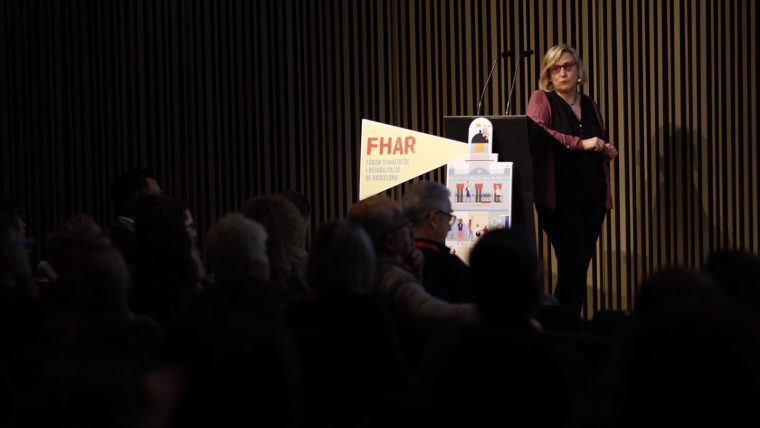 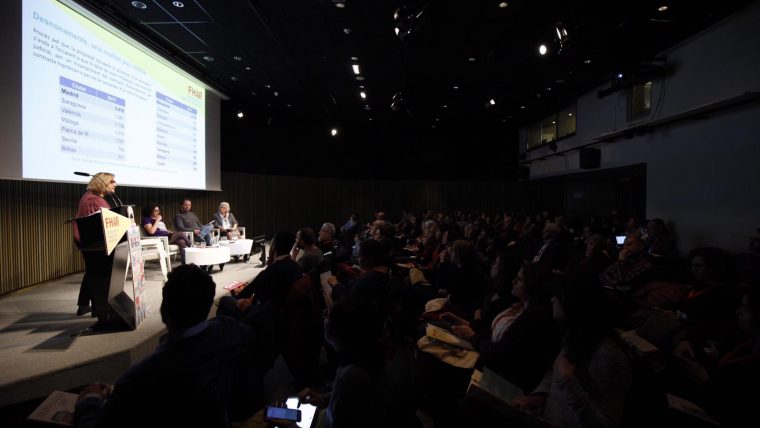 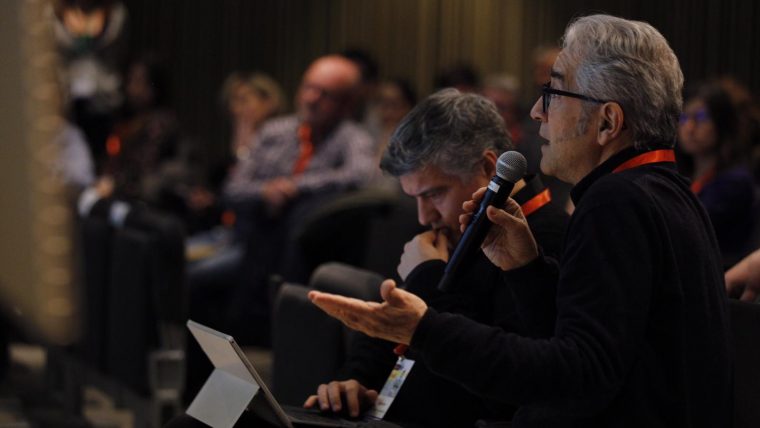