The Urban Canopy – Tram Area project covers an area of 40,735 square metres and will be one of the first steps for connecting the tram system in Av. Diagonal. The remodelling project will adapt the road in the section between C/ Castillejos and C/ Badajoz as it goes through Pl. Glòries.

The connection of the tram system in Av. Diagonal has taken another step with the initial approval of the Urban Canopy – Tram Area project to remodel the perimeter of the future Parc de la Canópia in the section nearest the Llobrtegat and the sea, installing a new public transport interchange there.

With an investment of 21.4 million euros, the project will now be subject to a period of public scrutiny before going before the government commission for its definitive approval. The goal is to tender and award the first two work projects for connecting the tram system (the Urban Canopy and the revamp to Av. Diagonal) in the summer. The intention is for work to get under way in the autumn of 2021.

Besides the interchange for the T4, T5 and T6 tram lines, various urban and inter-urban bus services and the Glòries metro stop (L1), the Urban Canopy project includes:

In addition, some remodelling work will be done to the roads around the Canopy:

The project for the Besòs side of the Canopy is not definitive yet as it foresees the future inclusion of an exit for trams from the interchange to go towards Diagonal Mar and Gran Via Besòs, linking with the current lines. 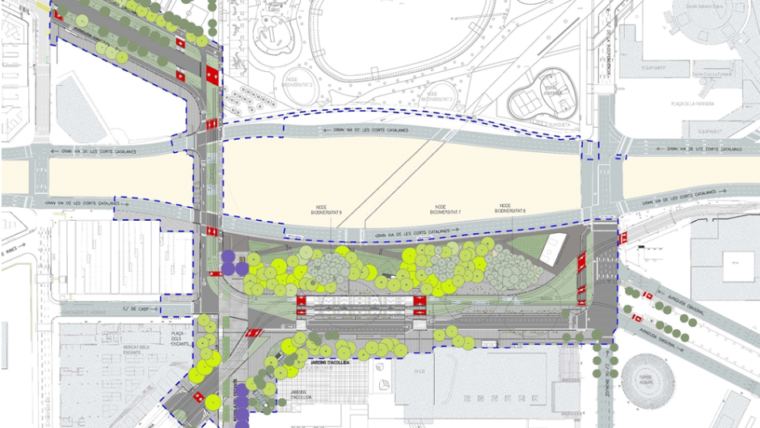