The superblock in the old quarter of Horta entails traffic calming measures in C/ Fulton, C/ Horta, C/ Feliu i Codina and C/ Chapí to address the lack of pedestrian space, promote recreation and outdoor activity in the streets and put an end to the Fulton-Horta-Palafox route being used as a short cut to get to the Ronda de Dalt ring road. 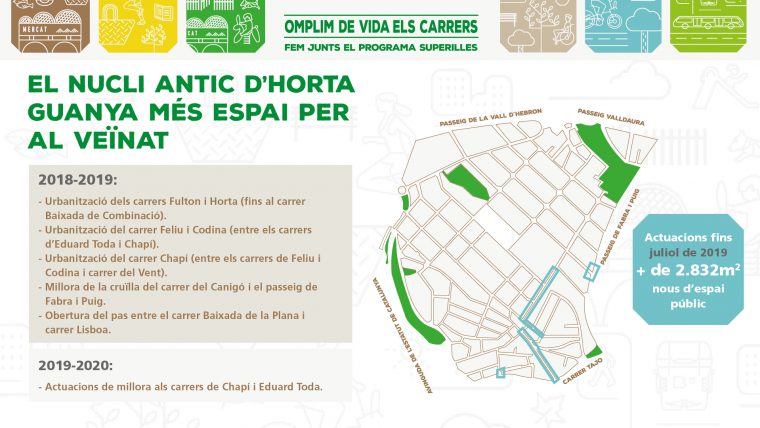 The old quarter of Horta is prioritising pedestrians in its streets with the roll-out of the superblock programme, recovering 2,832 square metres of space for use by local residents with street calming measures in C/ Fulton, C/ Horta, C/ Feliu i Codina and C/ Chapí

No through traffic in Fulton and Horta

Some 3,000 vehicles currently cut through the Horta neighbourhood to get to the Ronda de Dalt. To stop this happening and facilitate pedestrian mobility in the area, C/ Fulton and C/ Horta will get curbless paving and reduced speed limits in the section between Plaça de’Eivissa and Baixada de la Combinació.

The area will also be greened up with new plant tubs and new urban furniture.

Work in C/ Fulton has already begun and should be ready in December. Work will be carried out in C/ Horta as from January 2019 and should conclude in March. The cost of the work is 365,000 euros.

More life in Feliu i Codin and Chapí

Traffic calming measures will be implemented in C/ Feliu i Codina, between C/ Chapí and C/ Eduard Toda, and in C/ Chapí, between C/ Feliu i Codina and C/ Vent. The project sees these sections get curbless paving and reduced speed limits, along with urban furniture to create new spaces and larger tree beds to boost greenery.

The revamp for the four streets includes parking prohibitions in the pacified sections. Loading and unloading areas will be created, designed for brief parking stops.

The superblock in the old quarter of Horta also includes paved traffic sections where pedestrians have priority, such as the corner where Pg. Fabra i Puig and C/ Canigó meet, and the elimination of one lane of traffic from some sections of C/ Feliu i Codina and C/ Chapí.

Other work is also planned for the next term of office: traffic calming in the section of C/ Chapí between C/ Rectoria and C/ Feliu i Codina, the creation of more spaces in C/ Eduard Toda and a new parking area with priority for school buses on the plot of land between Av. Estatut and Pg. Valldaura.

Boost to the superblock programme

The superblock programme is moving forward with the aim of recovering city streets for use by local people, with proposals which adapt to the characteristics of each area of the city they are implemented in.

In Poblenou, where the superblock was set up two years ago, 25,000 square metres of space has been recovered for local residents, 10% of which is used for children’s play areas. Economic activity in the superblock streets has also been boosted by 30%.

The plan to develop the Sant Antoni superblock is also under way. So far the junction between C/ Comte Borrell and C/ Tamarit has been turned into a traffic-calmed public agora with 5,000 square metres of space for leisure and socialisation, with more greenery also added. An area of 21,000 square metres is still to be remodelled.

Progress is also being made on the Les Corts superblock, with traffic calming in C/ Conxita Supervia, one of the main features of the project, now completed.

The work on the Horta superblock comes in addition to these three projects. Before the current term of office ends a plan of action will also be presented for the Hostafrancs superblock. 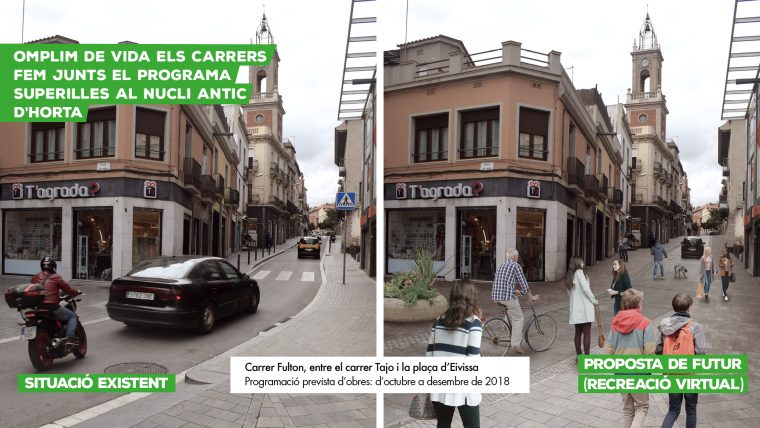 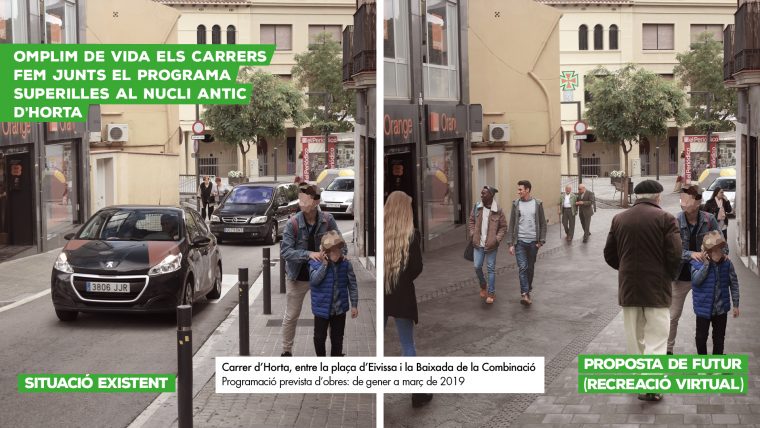 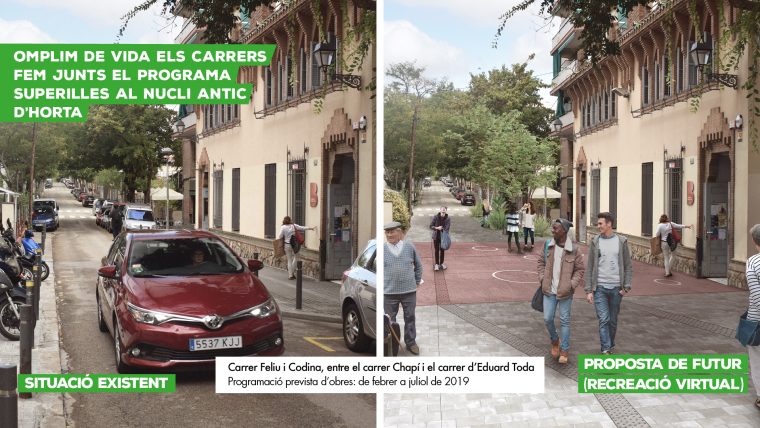