Putting an end to diesel use, doing away with single-use plastics and limiting flights

Cities of the world are meeting at the World Mayors Summit in Copenhagen to tackle the climate emergency. As priority measures, the Mayor of Barcelona has proposed putting an end to the use of diesel, the elimination of single-use plastics, limits on flights and changes to the agro-food model. Ada Colau also called for greater responsibility from states with resources and for global governance. 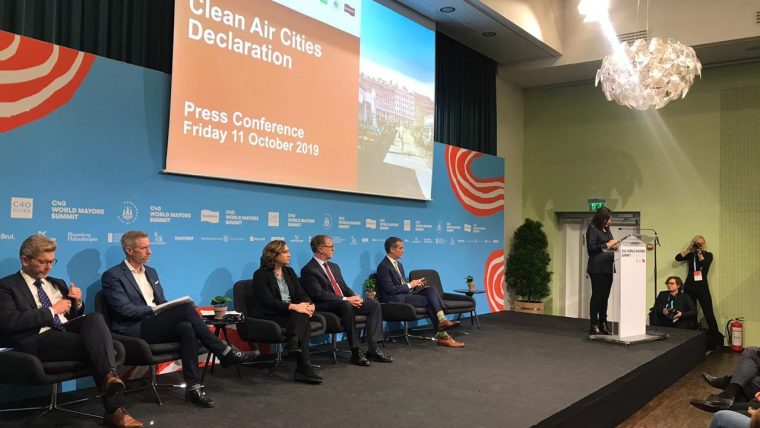 A hundred representatives from cities around the world belonging to the C40 network are meeting in Copenhagen. The C40 is embracing the Global New Green Deal, a report recognising the climate emergency and calling for metropolises and states to take an active role.

The Mayor of Barcelona, Ada Colau, used her speech to call for a genuine change of economic and manufacturing model. As priority measures, she demanded a deadline for putting an end to the use of diesel; backing for renewable energies; the elimination of single-use plastics which pollute the oceans; limits on short flights covering distances that can be covered by trains, and a change to the agro-food industry, which is currently unsustainable.

Barcelona will be declaring its own climate emergency decree, which comes into force on 1 January 2020. The declaration will coincide with the implementation of the permanent low emissions zone, banning the circulation of vehicles which pollute the most on working days, from 7 am to 8 pm.

The measure should affect 125,000 vehicles in the next four years and enable a 30% cut in emissions of NO2, the main source of air pollution in the city and responsible for 350 premature deaths every year.

The report Cities 100, compiled by the C40 network, includes three climate change measures by Barcelona City Council in its list of the hundred most ambitious climate initiatives in the world.

One is the city’s energy advice points, which offer eleven points around the city designed to defend energy rights and fight energy poverty. Another is the Climate Plan, a strategic programme with 242 measures to tackle climate change. The third is Barcelona Energia, the first public and metropolitan distributor of locally produced renewable energy, which supplies municipal services and facilities and nearly twenty thousand homes.