The bus-on-demand service is an innovative and pioneering solution, resulting from the Neighbourhood Plan and adapting to the mobility needs of people in the neighbourhood. In its first week, the bus provided service for 515 passengers, with an average of 72 users on working days.

The new service, known as El Meu Bus and set up by Barcelona City Council and Transports Metropolitans de Barcelona (TMB), started operating on 21 January. Now anyone can get from one point of the neighbourhood to another and connect with the public transport system with the usual tickets and travel cards on the integrated system. All users need to do is register and request the service using an app or a freephone number. The vehicle (a TMB minibus adapted for people with reduced mobility) will then be at the bus-stop at the time requested.

The bus-on-demand route is based on a smart system which matches the journey requests received in advance. The journey can be requested at any time, although it is recommended to make the request far enough in advance to ensure the service functions smoothly. There are 28 stops to choose from within the established operating hours (7 am to 8.30 pm on working days, 8 am to 8.30 pm on Saturdays, and 9 am to 8.30 pm on public holidays), with users able to request a one-off service or a periodic one. The app, also called El Meu Bus, can be downloaded free from virtual Apple and Android stores. It also allows users to modify or cancel a request.

Balance of the first week in service

In the first eight days in service, from 21 to 28 January, the bus transported 515 people as part of 376 services. The average number of users on working days was 72, while on Saturday there were 38 passengers and on Sunday 45.

A total of 205 users have so far registered and the bus has clocked up 819.5 kilometres in journeys. The bulk of the journeys were made between the upper and lower areas of the Torre Baró neighbourhood. The most popular stops are the ones at Castellví-Lliçà (15%) and Prats de Rei – Castell d’Argençola (9%), both in the upper section. In addition, most of the journeys enabled passengers to get to facilities and services in the neighbourhood, such as schools and primary healthcare centres, and to transfer to and from other public transport connecting the neighbourhood with the rest of the city and the metropolitan area.

The goal of the new bus on demand is to ensure a public transport connection between the upper part (sector 3) and the lower part of Torre Baró, where there are a full range of neighbourhood services and public transport options, as well as with the neighbourhood of Ciutat Meridiana. The bus is a complementary service, without any of the current services being replaced, and enhances access for many local residents to health services, education centres and other facilities. It also improves connectivity with public transport: the metro, the local train network and city buses, including the new bus network.

Torre Baró and the neighbourhoods forming the Zona Nord area constitute a part of the city where the geographical and urban make-up have meant difficult access to public transport. This led the municipal government to set up this pioneering bus service here, as a pilot scheme, thus helping resolve the historical deficits in areas precisely where public transport is a key factor in consolidating the neighbourhood and providing public services for citizens.

The pilot scheme is due to run for two years. Once that period ends, the results will be analysed to study the definitive implementation of the service and its roll-out in other points of the city with difficult access to public transport. The project is part of the Neighbourhood Plan, with the involvement of the District Office, the Councillor’s Office for Mobility and TMB. An initial investment of 380,000 euros was made to prepare the infrastructure and technology, while the estimated annual cost (operating costs less income) will be around 500,000 euros, to be covered by the City Council via the Neighbourhood Plan. 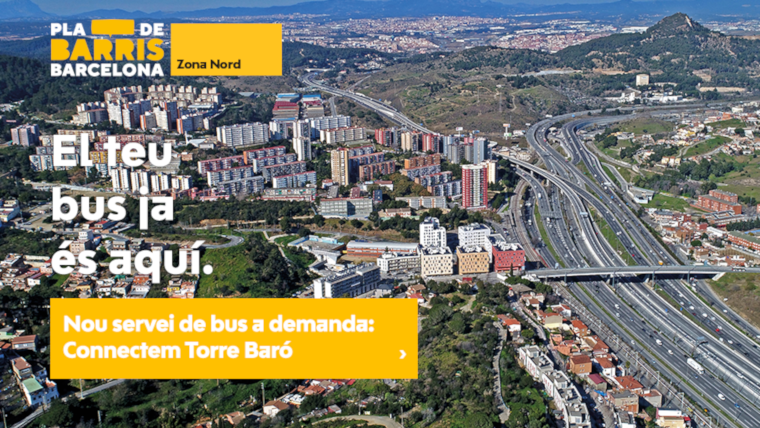