Take part in the Week Without Noise

International Noise Awareness Day is on 25 April and offers an opportunity to become more aware of the effects of noise and sounds in our city. Barcelona City Council is organising a series of related activities. Don't miss them! 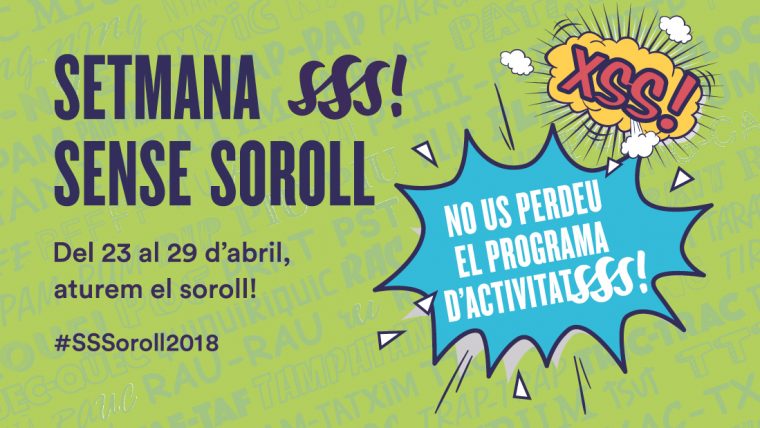 Barcelona City Council and the Government of Catalonia are promoting the Week Without Noise, a series of free activities at different places around the city from 23 to 29 April.

The week has a twofold objective. Firstly, to raise awareness about the increase in noise and the negative effects this has on people’s quality of life.

Secondly, to promote the audible heritage which forms part of everyday life in our neighbourhoods and includes the sound made by water coming from fountains, by birds, bell towers, ship horns in the distance and more. An intangible and frequently overlooked heritage, which it is important to value.

As part of the programmes ‘Barcelona Sona’ and ‘Quin soroll fem?’, you’ll find a string of activities to fine tune your hearing and discover the heartbeat of the neighbourhoods. Don’t miss them!

The ‘Barcelona Sona’ programme by Barcelona City Council includes routes and activities highlighting the wealth and beauty of the city’s sounds.

Most activities are being organised for Wednesday 25 April, coinciding with International Noise Awareness Day. ‘Barcelona Sona’ offers four activities to choose from on the day:  a stroll around the Parc de la Ciutadella as you learn to identify bird species by birdsong, a workshop to create a sound map (light breakfast included), a round table session based around the documentary Sonic Sea, and a silent flashmob in front of Can Fabra, in Sant Andreu.

Besides the activities on 25 April, the City Council is also offering ‘Els batecs dels barris’, three guided routes to discover the sound heritage of different areas of Barcelona. Participants will have their eyes covered at points along the routes, sharpening their hearing to listen to sounds which usually go unnoticed.

On Thursday 26 April, the guided tour ‘La música dels horts’  will be conducted around the centre of Horta from 10 am to 12 noon. During this route, participants will stop in different spots to cover their eyes and discover what the neighbourhood sounds like.

On Friday 27 April, it’s the turn of the neighbourhoods of La Font de la Guatlla and La Marina, with a route from 10 am to 12 noon. This activity, entitled ‘Les grans fonts’, sees participants concentrate on listening to the sounds in Avinguda de les Cascades and the silence of the ponds at the Pavelló Mies van der Rohe.

Finally, on Saturday 28 April, the third activity takes place near the sea, with a route around the neighbourhoods of Vila Olímpica and Port Olímpic, also from 10 am to 12 noon. This time around, the sound of waves, seagulls and ships take centre stage. This activity is entitled ‘Els nous cants de sirenes’.

What noise do we make?

Besides the ‘Barcelona Sona’ activities, the Department of Environmental Quality at Barcelona City Council, in collaboration with the Government of Catalonia, is organising ‘Quin soroll fem?’, a participatory activity which is part of the programme for the Week Without Noise, from 23 to 29 April 2018.

Various marquees will be set up around the city’s districts for the Week Without Noise. Anyone wanting to take part will be able to get sound meters there and receive instructions on how to measure noise in the environment.

The idea is for participants to record two acoustic environments: one in a busy spot, with a high volume of vehicles, and another in a quieter spot. By comparing the two readings, people will become more aware of an everyday reality which accompanies us: environmental noise in our city.