As ever, and to mark International Women’s Day, Barcelona City Council is inviting entries for the 8 March- Maria Aurèlia Capmany Award to reflect on a topic with a social and gender impact. 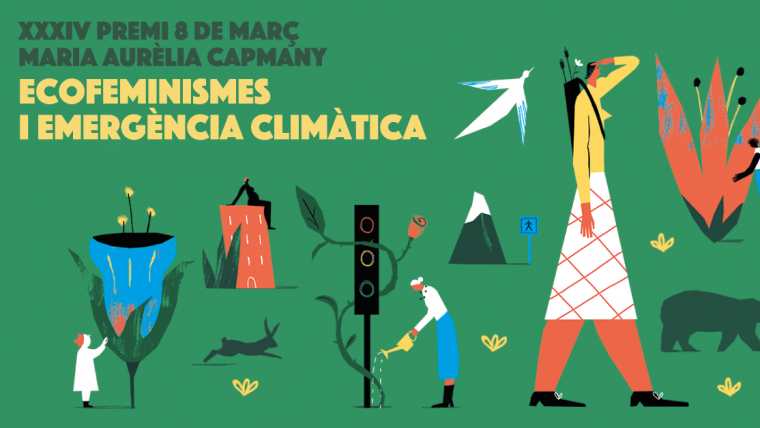 The theme for the 34th edition is: “Ecofeminism and climate crisis”, the aim being to reward those projects that have an intersectional and gender perspective and a focus on women to help tackle the climate crisis and carry out ecofeminist action in the city.

Climate justice: gender justice
The climate crisis is evident: rising temperatures, drought, the extinction of animal and plant species, pollution etc. Large numbers of teenage and young adult activists have come out in defence of the planet: Greta Thunberg from Sweden, Berta Zúñiga Cáceres in Honduras, Alexandria Villaseñor in USA and Artemisa Barbosa Ribeiro in Brazil. These are the heirs of the ecofeminism of Petra Kelly, Rachel Carson and Karen Warren, and, closer to home, Alicia Puleo, Marta Tafalla and Yayo Herrero.

From the women of the Chipko movement in India, who clung to the trees of communal forests to prevent them being chopped down, to the female leadership and participation of the platform in defence of the Ebro river, we know that feminism and ecologism share the defence of life and the certainty that the current model is increasingly unsustainable.

Climate justice is linked to social and gender justice, as women are those who suffer the climate crisis the most. While women accounted for just 23% of national parliamentarians and 4% of CEOs in large companies in 2016, they also represented 80% of climate refugees. Women also promote the most initiatives to adapt to the consequences of climate change in community, family and political spheres. Historically, in everyday life, women are mostly responsible for the reuse and exchange of assets, consumption and food, and, in general, daily upkeep at a family and community level.

While cities are responsible for roughly 70% of greenhouse gas emissions, the role of Barcelona is crucial and must continue to be so.

The city’s commitment has seen it put together the Climate Plan 2030, with 242 measures to cut pollutant emissions by 40%. This is the focus for this year’s 8 March – Maria Aurèlia Capmany Award.

Terms and Conditions for Participation
Projects and work can be put forward which promotes awareness, environmental, social and gender justice, women’s empowerment from an ecofeminist perspective etc. (See attached rules)

Projects must be different, or at an initial stage, must include the intersectional gender perspective and be able to be carried out in the city of Barcelona.

Projects may be submitted by natural persons, groups, associations or other non-profit organisations whose registered residence or head office is in Barcelona. For groups without legal personality and which are made up only of natural persons, the group’s representative will have to be registered with Barcelona’s municipal citizens register.

As you can see from the award’s terms and conditions, evaluation criteria include: applying the intersectional gender perspective; the use of collaborative practice and a networked approach, as well as a majority presence of women or gender parity in the make-up of the participating teams.

The deadline for submitting projects is Friday 31 January 2020.