Let’s make it Christmas in all the neighbourhoods!

The switching on of the Christmas lights signals the start of the festive season, reaching all the neighbourhoods in the city with over a thousand cultural, commercial, solidarity and recreational activities for young and old, where responsible and local commerce play a central role. 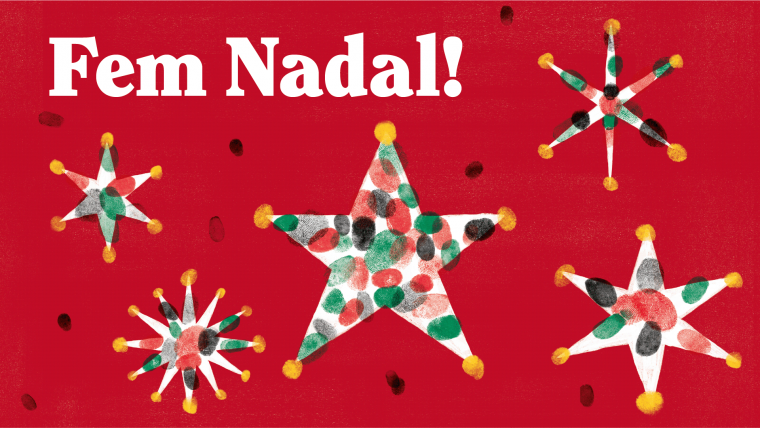 Christmas in the city is truly polycentric occasion this year, with over a thousand activities around the neighbourhoods and a special focus on the unique nature of local commerce and its capacity for social cohesion. The idea is also to raise the profile of initiatives from the collaborative, circular and solidarity economy which offer a more responsible and sustainable way of shopping.

This year’s Christmas lights will be switched on and off earlier to respect local resident’s hours of rest. Different times apply on special days:

Extra policing, public transport and cleaning and waste management services will also be laid on over the festive period.

Switching on of the Christmas lights

Christmas officially starts on the evening of 22 November with the switching on of the lights. This year’s ceremony features a giant four metres tall, going by the name of Senyor Hivern (Mr.Winter). He’ll be accompanied by the Gran Llibre de les Coses Petites (Big Book of Little Things) as he plays his part in one of the most magical moments of Christmas. Sant Martí hosts the occasion, with fantasy lighting covering over 100 km of streets and squares all around the city.

The scenographer Sebastià Brosa is the author of this year’s nativity scene in Plaça de Sant Jaume. The scene uses a large table to represent a family meal, surrounded by twelve chairs, each inspired by the characters from the traditional nativity scene.

The Santa Llúcia, Sagrada Família and Gran Via fairs are back again this Christmas, with stalls selling craft items, Christmas trees and plants, sweets and traditional products.

Plaça de Catalunya is once again hosting the Responsible Consumption and Social and Solidarity Economy Fair, bringing together nearly sixty organisations and enterprises for this fourth edition. A wide array of craft items, textiles and cultural proposals demonstrate that it’s also possible to shop and consume sustainably and with solidarity at Christmas. The fair features projects from the collaborative economy with a high degree of social and environmental return for the city’s neighbourhoods and districts.

The fair also includes a responsible consumption area, consisting of a marquee with a stage to promote solidarity and sustainable consumption with debates, music and family activities.

Besides the Responsible Consumption Fair, the square will also be the scene for  various family activities at the City of Smiles. Games, workshops, activities and entertainment are all in store here for young children, who will also have the chance to meet Mr. Winter and the Big Book of Little Things, which form part of the children’s shows. Youngsters will also be able to deliver their letters to royal messengers from 2 to 4 January.

The Fabra i Coats is once again the scene for elves to prepare toys as they work flat out to get everything ready for the eve of the Three Kings. The factory will fill with recreational family activities, shows and entertainment for young and old to enjoy together.

‘The Christmas illuminations light up commerce’

Design students and retailers are collaborating for the second year running to decorate shop windows with innovative and creative Christmas designs. This municipal initiative, organised by the Barcelona Centre de Disseny, spreads from Sarrià this year to include the Vila de Gràcia and Sant Andreu neighbourhoods. Besides making local commerce more visible, this initiative is also a boost for local talent in Barcelona.

This year we’ll be seeing out the old year with an innovative and surprising multimedia show by the Groupe F company, inspired by the traditional twelve grapes. Before the show there’s a chance to enjoy the music and lights at the Magic Fountain in Montjuïc.

On 5 January Their Majesties the Three Kings will be arriving in the afternoon by boat at the Moll de la Fusta wharf, where the people of Barcelona will receive them along with their traditional entourage of magical creatures, royal messengers and pages. After being welcomed by the Mayor, their floats will head off on a parade around the city, guided by Mr. Winter.