The right to refuge, one of the main themes at the international conference ‘Cities for Rights’

In a world where rights are being curbed more, and at a time when protected spaces and achievements made to date are under threat, cities and municipalism represent a counterweight which stands up for full citizens’ rights from a local perspective. The Universal Declaration of Human Rights (UDHR) was adopted by the United Nations in 1948 and outlines the basic rights which all countries, governments and administrations must guarantee. The European Conference of Cities for Human Rights, held in Barcelona in 1998, confirmed the need to keep working on the UDHR and drew attention to the fact that cities represent a first level for specifying and guaranteeing those rights, as well as having a role in transformation thanks to active citizens. 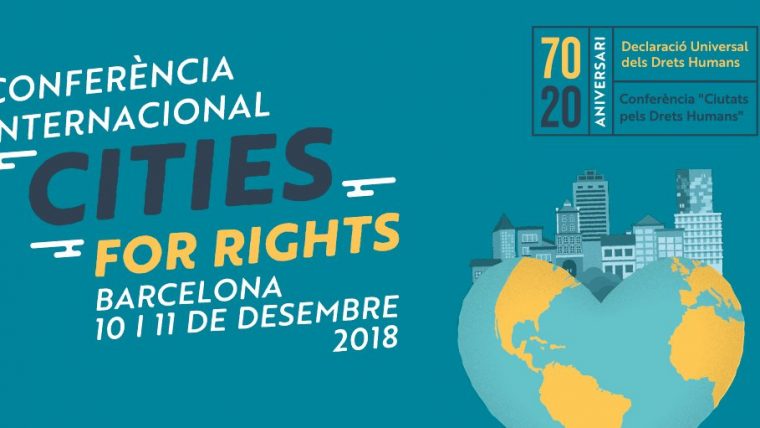 On that occasion the municipalist movement decided to adopt the European Charter for the Safeguarding of Human Rights in the City, a political commitment which also set out legally binding obligations for local authorities. Barcelona is one of the cities which has best upheld the mandate of the charter over the last two years. On 10 and 11 December the city will be holding the International Conference ‘Cities for Rights’, which will again be looking at the role of cities in guaranteeing human rights.

Standing up as cities for the right to human mobility

One of the main themes for the conference, organised by the Department for Citizen Rights and Diversity at Barcelona City Council, will be human mobility. Since the European crisis caused by the war in Syria, this right is one of those most threatened as a result of the criminalising and discriminatory migration policies operated by the majority of European states at present. Some cities, such as Barcelona, have shown that municipal politics can counter this, sticking up for the rights of people seeking refuge and welcoming them in line with the UDHM. This, at the same time as demanding administrations with the most power over immigration and asylum to abandon their inhuman policies.

Over thirty speakers will be taking part in the conference. They include mayors from cities such as Washington DC, Amsterdam, Bristol, Naples, Riace and Barcelona, municipal politicians from other cities and leading figures in thought, research and art for human rights.

The conference is being held at the Centre de Cultura Contemporània de Barcelona (CCCB) and is free to attend. Anyone wishing to do so should sign up at Cities for Rights.

Based on the conference, and with a broader vocation for public awareness, the ‘Umbral’ art and education project offers a series of activities to reflect on migration as a characteristic of any contemporary society. The project is also intended as an opportunity to understand the situation of inequality which millions of people around the world find themselves in.

Projects by participating entities from Barcelona include ‘Frontera sur’, ‘Sueños refugiados’ and ‘Un regal per a Kushbu’. The latter, with the support of Barcelona City Council and the ‘Barcelona, Refuge City’ plan, has developed art materials (video, photos and comic) showing the most socially and politically insistent side of culture in Barcelona, a city which backs human rights.