Guide to inclusive and prejudice-free communication

The way we speak and express ourselves should reflect the diverse and complex society we live in. A new guide on inclusive communication aims to promote social harmony with recommendations relating to racism, gender, mental health and people with disabilities of functional diversity. 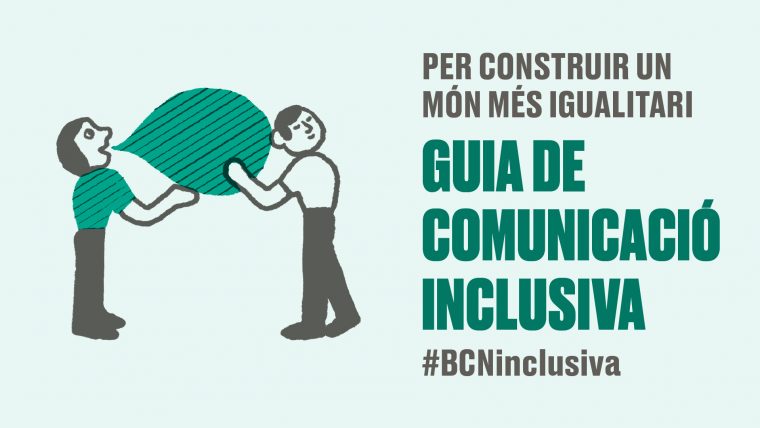 Communication which is free of stereotypes, prejudice and discrimination, and which is respectful towards all others. That’s the goal of the first edition of the Guia de comunicació inclusiva [inclusive communication guide], with a print run of 62,000 hard copies, accompanied by a digital version and tackling various topics. Using examples and recommendations, the guide is a reference document for the public and for municipal staff at various facilities.

Racism and ethnic and cultural prejudice

Commonly used concepts such as immigrant, coloured person or jihadist terrorism demonstrate how language is impregnated with ethnic prejudice and racism. Besides offering alternatives to colonial and discriminatory expressions, the guide also recommends avoiding generalisations such as ‘Arabs’, ‘Africans’ and ‘Latin Americans’, which reduce highly diverse cultural realities into simple stereotypes.

The use of language which is free of homophobic and sexist expressions helps create a fairer and more equal work, breaking away from a binary conception which excludes many realities relating to sexual and gender diversity. For instance, when taking about the ‘gay collective’, reference is only made to homosexual men, yet if we use the concept LGBTI and its variants, this includes lesbians, transsexuals and transgender people, bisexuals, intersexuals, queers, asexuals and others.

People with disabilities and functional diversity

Communication barriers are just as discriminatory and unfair as physical ones. To build a more inclusive and accessible world, the guide recommends avoiding victimisation and condescendence and placing the emphasis on people, not their disabilities.

One in four people will have some sort of mental health problem at some point in their lives. In order not to fuel the stigma of mental health, which is based on prejudice and a lack of knowledge, the manual recommends not making light of problems and disorders, particularly when we refer to moods. When a person is sad or their mood changes easily, it’s best to avoid terms such as depressive or bipolar.

Images and people’s attitudes also convey stereotypes, though very often not so evidently. People who appear in photographs and the images we create reflect the world we live in and so those images should seek that diversity. There are many types of families, skin colours and different bodies.

In addition, the way we behave with others can also express disrespectful or discriminatory attitudes. The guide covers some of these situations that can be avoided: