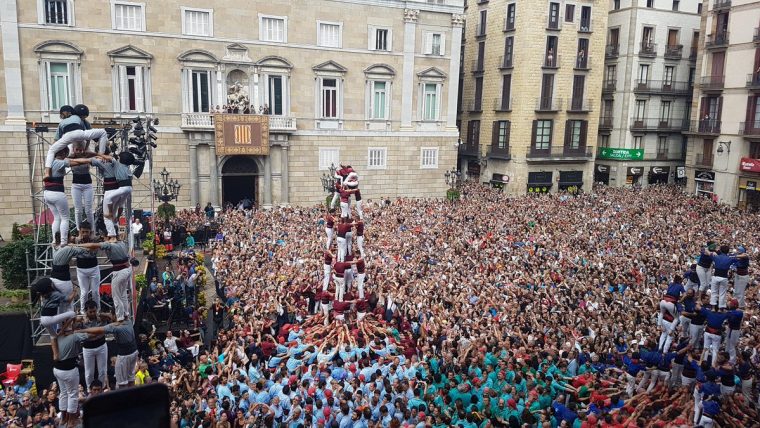 In the world of popular culture, the Santa Eulàlia festivities are renowned for the Laies Parade, the children’s opening speech, and also because it marks the start of the Casteller [human tower] season in Barcelona. Furthermore, this year’s Santa Eulàlia casteller gathering is special, because it features the debut of the Castellers de Sarrià. This group has been refounded after disbanding in 2004, and it now becomes the city’s seventh human-tower group.

The seven casteller groups will meet at 10 am in Plaça Nova, and then move on to Plaça de Sant Jaume in two different parades. At the Cathedral’s Santa Eulàlia door, in Carrer del Bisbe, the groups will raise pillars in honour of the patron saint. At 11 am, the groups will begin raising towers in front of the City Hall balcony, and once the gathering has ended, the Santa Eulàlia Retinue will begin their dances.

The Castellers de Sarrià are a human-tower group that was founded in 1999, but disbanded in 2004. They wear red shirts and the best towers they have achieved are: the 2 by 6, the pillar of 5 “carregat” [completed but failed during dismantling] , the 4 by 6 with “agulla” or needle [a pillar inside the tower], the 3 by 6 with “agulla” and the 3 by 6. They have been working to revive the group for the last two years and it has been listed as a “group in formation” by the Casteller Group Coordinating Committee of Catalonia. They performed last October in Sarrià’s Festa Major [big annual festival], where they were sponsored by the Castellers de Barcelona and the Castellers de la Vila de Gràcia. The group practices on Wednesdays, from 6:30 to 8:30 pm, at the Centre Parroquial de Sarrià, and on Fridays from 8 to 10:30 pm at the Frederic Mistral school.