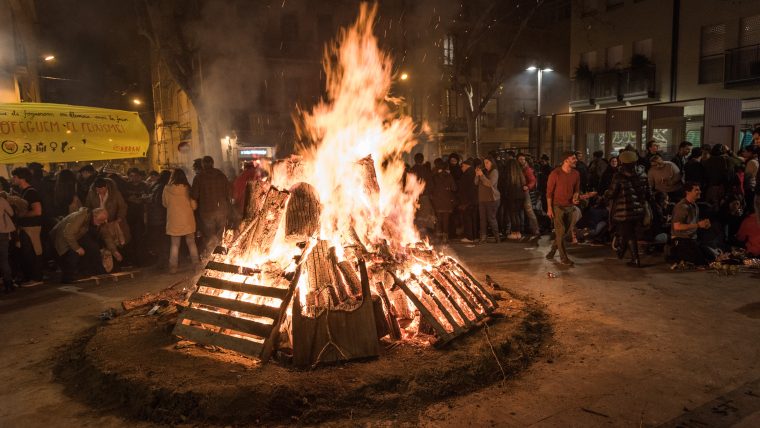 It has already been twenty-eight years since the streets and squares of the old Vila de Gràcia first filled with bonfires on the last weekend of January. This is where the Foguerons de sa Pobla festival, a tradition imported from Majorca that has made a deep impact on Gràcia’s festive calendar, takes place. In fact, the Foguerons or bonfires are so well established that they have become Gràcia’s unofficial winter festival. A dozen bonfires will burn this year, and a street party with grilled meat, music and singing will be held around them on Saturday evening. But the party lasts three days – from 23 to 25 January – and includes many other events to help people learn about Majorca’s popular culture and traditions.

Majorcan food tasting
An excellent way to learn more about a culture is through its cuisine. For this reason, one of the first events of the Foguerons is a Majorcan food-tasting session. Bar del CAT will be full of sobrassada [Majorcan sausage], botifarró sausages and camellot, some of the most common products roasted for the Sant Antoni festivities in sa Pobla.

When will it be held? On Thursday, 23 January, at 8 pm, at the Tradicionàrius Crafts Centre.

Folk Singing
After dinner, once everyone has a full stomach, it’s time to start singing. This is why an improvised song recital called “Oda a la Sobrassada” [Ode to Sobrassada] is held every year. Gloss singers from Barcelona, as well as some that have come all the way from Mallorca, such as Mateu Xurí, Maribel Servera, Catalunya Canyelles and VOPB de Catalunya, among others, will take part. In addition, like any good gloss-singing event, it is open to everyone. Will you sing with us?

When will it be held? On Thursday, 23 January, at 9 pm, at the Tradicionàrius Crafts Centre.

Workshop, concert and “ball de bot” dance
Have you ever danced the “bot”? It is Majorca’s traditional dance, and every year a dance group makes the trip from the island specifically to hold a free workshop at the Tradicionàrius. The groups chosen this year are Cofre Antic and Roada, which will be giving a concert and a dance display after the workshop. Afterwards, everyone will be welcome to put their newly gained skills to the test in an open dance session.

Folk at the Markets
Can you imagine coming across the traditional sounds of Majorca while doing your shopping at the market on a Saturday morning? Well, that’s “Folk als Mercats” [Folk at the Markets], a local-music concert programme held in four markets in the district of Gràcia. The Majorcan bagpipe group Xeremiers, as well as gloss singers from Majorca, will delight the crowd’s at the market with rhythm and folk music to mark the Foguerons festival.

When will it be held? On Saturday, 25 January, at 12 noon, in the markets of L’Abaceria, La Llibertat, Lesseps and L’Estrella.

Gathering of popular-culture festival groups, step-dancing and cercavila
One of the strong points of the festival is the cultural exchange that has been taking place for years between the popular-culture festival groups of Gràcia and those of Sa Pobla. And the best moment when all this takes place is on Saturday afternoon, during the dancing and the cercavila [music parade] which is held in the streets of Gràcia by the Majorca and Barcelona groups. The following will be taking part this year: the Xeremiers de Mallorca, La Sacairada, Trabucaires de Gràcia [blunderbuss shooters in period costume], the Geganters de Gràcia [giant figures], Bastoners de Gràcia [stick dancers], Bastoners de Barcelona, Tamborers d’Albopàs [drumming and percussion], Dimonis d’Albopàs [devils], the festival group Malsons de la Vella [devils], Atzeries de la Vella [fire beasts], the Diables de la Vella de Gràcia, the Drac de Gràcia [devils and dragon figure] the percussion group Kabum, Diabòlica de Gràcia, Escuats de la Malèfica del Coll, Malèfica del Coll [devils], Gaudiamus the dragon and the Castellers de la Vila de Gràcia [human towers].

Bonfire lighting at the squares of Gràcia
After the step-dancing of the popular-culture festival groups, the party will move to each street or square where there is a bonfire. From the moment the bonfires are lit, a street party where you can grill meat, drink Herbs de Majorca, sing glosses, do some jota-dancing, etc. begins. The party has a different feel in each place! This year, you will find a dozen such parties spread throughout Vila de Gràcia: on Plaça del Diamant and Plaça de la Virreina and on Carrer Verdi, Carrer Joan Banques, Carrer Llibertat, Carrer Tordera, Carrer Fraternity (upper part), Carrer Fraternitat (lower part), Carrer Puigmartí, Carrer Berga and Placeta de Sant Miquel.

Sa Ximbomba Festival:
Among the dozen bonfires, the one on Plaça del Diamant is one of the busiest, and it is of particular interest because this is where the Sa Ximbomba Festival is held. Anyone who wants to can cook grilled meat here and, after eating, the Majorca and Cor de Carxofa gloss singers will sing glosses to friction drums and Majorcan bagpipes.

Music on Plaça de la Virreina
Another particularly popular bonfire is the one on Plaça de la Virreina. Although you can’t cook meet here, there is a stage dedicated to Majorcan dancing and singing, and performances take place throughout the evening. Some of the groups that will perform this year are: Roada de Mallorca and Cofre Antic d’Inca.

In the twenty-eight years that the tradition of the Foguerons de Sant Antoni de sa Pobla in Gràcia has been going on, good posters have been made to announce them.

When will it be held? From 17 January to 2 February at the espai Albert Musons (Alzina’s Street, 9)