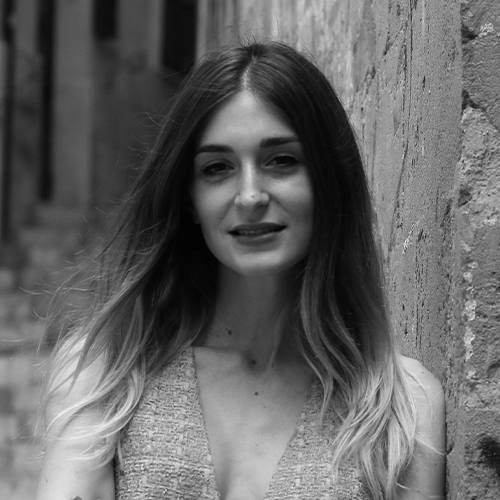 Laura Gost (Sa Pobla, Mallorca, 1993), with a Degree in Communication, is a scriptwriter. After winning the Art Jove Story Prize (2016), she was awarded the Goya for Best Animated Short Film as a screenwriter for Woody & Woody in 2018.

Remei and Maria were born two years apart, one in Gràcia, the other in Horta. Their paths would probably have run in parallel, without ever crossing, had Remei not decided to take over the business of her spinster aunt, Miss Eulàlia, who everyone called Lali, when an unexpected uterine cancer took her too soon. She passed away at the tender age of seventy, and so suddenly that poor Lali from the clothes shop Vestits Lali hadn’t even been able to decide on the outfit – pale yellow or rosemary green – she wanted to be buried in.

Remei, orphaned and with no siblings or cousins, having just turned thirty-one, estimated that Vestits Lali could easily survive for another twenty years; twenty years of linen blouses and trousers in early spring, of bathing suits and sandals in summer, of heavy coats and light trench coats.

Well, twenty years of regular and foreseeable income that would only start to dwindle when the generation of women born in the late 1930s began to die a natural death, that is, of old age, for a thousand possible reasons that would nonetheless converge in the widespread belief that these ladies, like the dresses and shoes that had gone before them, had to make way for the latest season.

Maria’s mother had been a regular customer at Vestits Lali and continued to be one when Remei took over from her aunt, forcing her daughter to replace the childhood affections she reserved for Miss Eulàlia with the generational bond that had tied her to Remei since she had spoken to her for the first time. Back then Maria was twenty-nine years old and had started going out with Josep, Pep to his friends, whom she would end up marrying in the church of Sant Vicenç de Sarrià after eight months on and off.

Thirty years had passed since Maria and Pep had tied the knot on the altar, which was to be followed by a string of relatively funny, more or less impertinent questions that would regularly come up at family meal times for the next ten years: “And when will you have kids?”, “Wouldn’t it be funny to call him Jesús and form the Holy Trinity?”. Pep and Maria had learned to smile and bow their heads: this is how they conveyed a certain ambiguous impatience while they silently prayed that those making the remarks would have a funny-looking offspring with flat feet, overly thin lips and a monobrow.

With no children or the chance of picking up some, the couple had found a way to fill the voids without plain reproach: both had learned to remind themselves inwardly that having children did not always lessen the emptiness of lacklustre Sunday and holiday evenings, but, all too often, the void just got louder when there were kids around.

After thirty years of everyday life dedicated to one another, Maria still loved Pep, in her own way. Maria had only argued twice over three decades of analogue coexistence with this good-natured man with affable mannerisms, and she had valued Pep’s warm spirit until she had realised that warm spirit was an attribute that didn’t sound that good when praised aloud.

Remei had been one of the people who had encouraged Maria to celebrate her thirty years of marriage. A few weeks beforehand, when Maria had gone into her store to buy a new blouse, Remei, with her mind accustomed to finding excuses to get dressed up, had remembered that Maria had gotten married two years before she tied the knot to Narcís, and, if she and Narcís were twenty-eight years married in August, it couldn’t be too long to go until Maria and Pep’s thirtieth wedding anniversary. 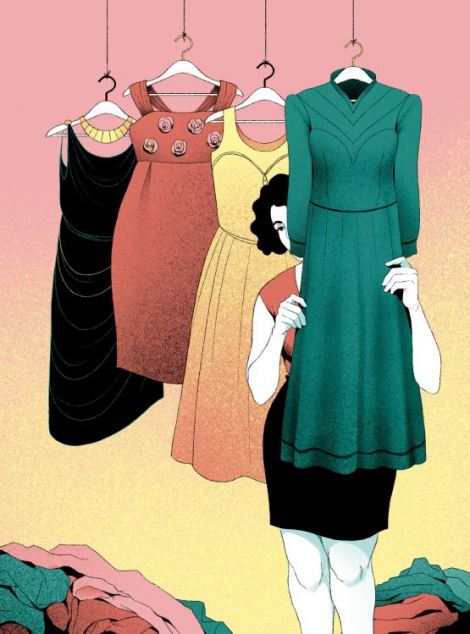 Maria couldn’t understand how Remei was still able to leave her alone with Narcís.

When Maria confirmed this guess, Remei showed her a gorgeous, elegant lilac dress that Maria found too beautiful for the celebration of a marriage whose lack of passion and excitement had ended up quietly spoiling it. Remei invited Maria to have a think about it and told her to come back the following week: she promised to have a small selection of dresses at the ready provided that Maria considered taking the lilac dress. A week later, as agreed, Maria went to the old Vestits Lali shop and found it virtually free of customers, and perhaps that was why Narcís’ presence next to the counter, calculator in hand, upset her more than usual. Remei gushingly said hello to Maria, as she always did, and then headed to the storeroom to get the dresses she had picked out for her.

Maria couldn’t understand how Remei was still able to leave her alone with Narcís: after so many years of witnessing his arrogance in her presence and her utter disdain if he was in her company, anyone would have expected Remei to try to avoid the awkwardness that occurred when these two customarily cordial and practical people coincided in the same place. Maria looked at Narcís carefully: since she had met him, his hair had thinned, the fat fingers with which he used to help Remei take inventory had become scrawnier, and the years had also stolen three or four centimetres from his height, diminishing the arrogant manner that she had initially assumed in a body so tall and snooty, so annoyingly well dressed that, next to him, the store’s mannequins seemed insignificant.

Maria had felt something so intense for Narcís that only she could classify it as dislike or contempt or disgust, that is, as feelings opposite to those that Pep stirred in her. Maria couldn’t tell if the realigning of affections between her and Narcís had taken place on the first, second or third day they met, and therefore she couldn’t pinpoint the exact date on which the mutual dislike had begun to be feigned and factitious: the exaggerated pretence they both kept up to try to conceal a connection that, after a very short while, would go on to become indispensable.

Remei came back from the storeroom with five or six garments, and Maria decided she’d take the lilac dress and another navy blue dress that she’d wear to celebrate her wedding anniversary with Pep. Once she paid, Maria said goodbye to Remei with a hug and just gave Narcís a nod. Then she headed home wondering whether Remei had come to notice the very moment in which the developing and mutual contempt between Narcís and Maria had become something else. Before opening the door and saying hello to Pep, Maria still had time to wonder whether Narcís would act surprised on seeing the lilac dress for their dinner date two days later to celebrate the twenty-eight years that had passed since Narcís had first ripped off the dress she had bought in Vestits Lali.

Laura Gost (Sa Pobla, Mallorca, 1993), with a Degree in Communication, is a scriptwriter. After winning the Art Jove Story Prize (2016), she was awarded the Goya for Best Animated Short Film as a screenwriter for Woody & Woody in 2018.