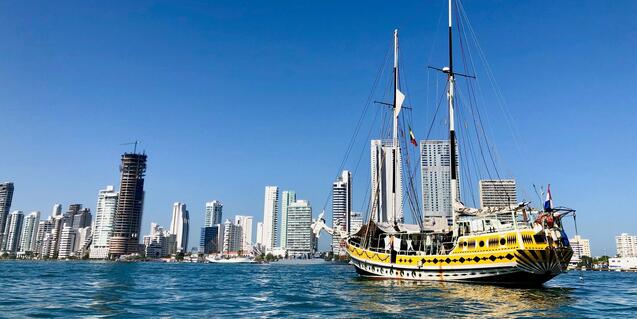 The Sala Bar d'Arts Santa Mònica is hosting, as part of the Tuesdays of video cycle, a performance by Nova Ruth and Grey Filastine — with video and music included — about their journey on board the Arka Kinari. It is a 70-tonne sailing ship that has been transformed into a cultural platform that circles the globe to promote climate change resilience and re-engagement with the sea. For them, "the maritime network was the original Internet, mixing people, languages and ideas".

The boat takes its name from the Latin word "ark", like Noah's ship at the time of the Flood, and the Sanskrit "kinari", alluding to a half-human, half-bird musician, guardian of the tree of life. During the day, Arka Kinari hosts workshops, skill-sharing and small concerts by local musicians. At night, the boat becomes the home of Filastine & Nova's performance with music to warn about climate change and cinematic images to imagine life after the carbon economy.

Filastine & Nova are a multimedia duo working to undermine borders and denounce the planet's destruction inherent to the Anthropocene era. Before releasing Burn it! in 2006, he was going to become a New York taxi driver but preferred to learn drumming in the carnival of Brazil, the mystical brotherhoods of Morocco and the island of Java. She used to sing rap in Indonesia with Twin Sista. Together they create electronic beats with dense layers of vocals, analogue synthesisers and strings. They don't make world music, but "music from another world": psychedelic rap, tropical post-folk and punk ethos. Their latest project is called Drapetomania.

The documentary shows the experiences of a stateless crew of activists, artists and creators. Arka Kinari's maiden voyage crossed the Atlantic, the Caribbean and the Panama Canal. Along the way, the Venezuelan military housed them on a deserted islet where they witnessed the US nuclear legacy to the Pacific atolls. In Micronesia, they learned about the traditional sailing techniques of the native seafarers. At the beginning of the pandemic, with a broken engine and near-empty cargo holds, they negotiated supplies with heads of state, weathered storms, picked up provisions from other shipwrecks and sought rescue from a supertanker.

The activity has the support of the Unidentified Frame Observatory, an intentional and thematic research project characterised by the analysis and critique of contemporary culture and society through the medium of video. Tickets are free, but seating is limited, so we recommend you be on time.