Diverse venues around the city
Information

11/03: The inaugural concert has been cancelled. For more information, please visit https://www.barcelonaobertura.com/en 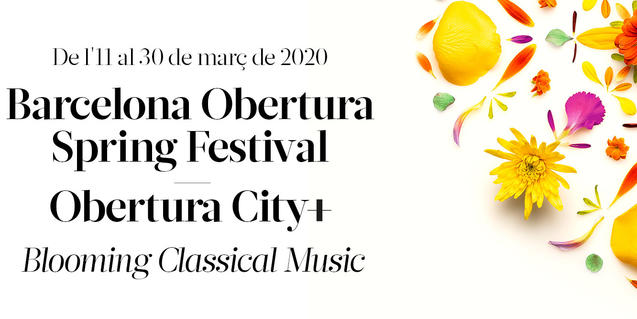 The classical music festival is back for its second edition with new features.

The Barcelona Obertura Spring Festival is the first classical music festival programmed by the city’s three most important music institutions, together with Barcelona Global and the support of the City Hall, which aims to consolidate Barcelona as a cultural and musical epicentre. The three organisers – the Gran Teatre del Liceu, Palau de la Música and L’Auditori – will also be the main venues of this festival that will take place from 11 to 30 March. You will have the opportunity to listen to renowned international artists, such as Valery Gergiev, Lang and Philippe Herreweghe, and the event will include the première of Wagner’s Lohengrin produced by his great granddaughter Katharina Wagner. In this year’s edition you will also have the chance to attend six master classes of violin, tuba and trumpet, among others.

Obertura City+, the festival designed to bring this genre closer to all ages, will be held in parallel on the same dates. Thanks to this initiative, 30 free concerts will be performed in 23 of the city’s emblematic venues, with the focus on three different themes: ‘Beethoven and his 32 piano sonatas’, ‘The Universe of Robert Gerhard’ and ‘Fusió Europa’. This year the Sagrada Família is joining the list of venues that will host Obertura City+, where, on 28 March, Barcelona Ars Nova choir will sing accompanied by the organist, Juan de la Rubia. The other venues include CaixaForum, MNAC, Casa Batlló and some civic centres, such as Zona Nord and Fort Pienc.

If you would like to see the programme and book your tickets, please visit the Barcelona Obertura website.