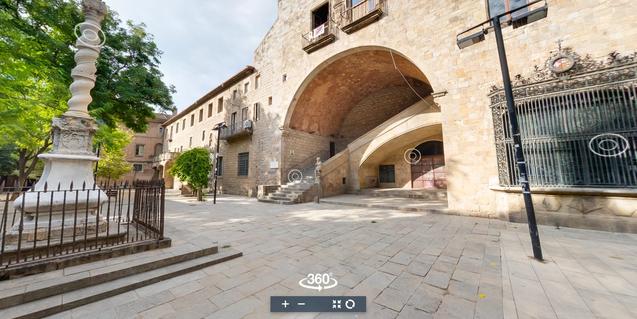 The space opens an interactive and visual resource in which the history of the library and the medieval complex where it is located is told.

Little could have been imagined by anyone who worked in the 15th century on the construction of the Hospital de la Santa Creu de Barcelona, ​​one of the most important civil Gothic buildings in Catalonia, that one day everyone who wanted, only on the condition of owning a device with an Internet connection, could see from their house the work they were erecting, and that every corner could be explored without moving from the sofa, the chair, or the bed. That hospital is today the headquarters of the Biblioteca de Catalunya (BC), and despite the thick and old stone walls, new technologies are also entering. The BC has just released a spectacular section on its website named The Biblioteca de Catalunya in 360º, which allows you to walk virtually through the facilities and learn about many aspects of the current state of the equipment and its collections, as well as the history of the building and the Biblioteca de Catalunya itself.

The project, according to its leaders, "arises from the need to design an interactive and visual resource that reinforces and adds value to the Biblioteca’s digital strategy, from a different perspective than how the institution usually presents itself." The virtual tour is divided into eight sections, which are illustrated with a 360º photograph from which the digital narrative is deployed in a fresh and interactive format. The sections are What can you do in BC?; What can you do from home?; The cultural action of the BC; Collections, works and treasures; The faces of BC; Collaborate with us; The BC in time; and Visit the medieval ensemble.

As they say on many occasions, it is better if you see it yourselves. You have it in just one click!