14 € at the ticket office. 13 € online. Free for children under 16, Saturdays starting at 3 p.m. and every first Sunday of the month, preferably with previous booking 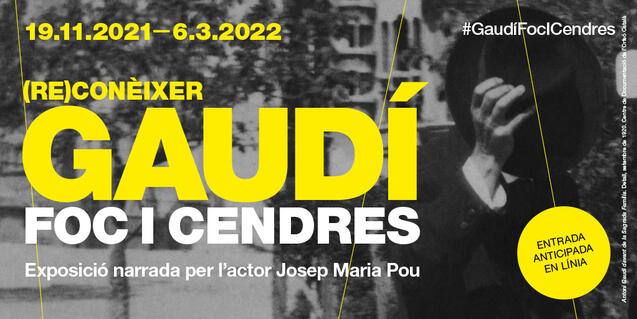 The MNAC re-examines the image of the architect, which has prevailed in the collective imagination, through an exhibition that dismantles its clichés and thoroughly reviews his career.

Antoni Gaudí (1852-1926) is undoubtedly the most popular and internationally well-known Catalan architect.

20 years after the celebration of the Gaudí Year, can we rethink the image we have of him? You will find the answer at this exhibition, (Re)conèixer Gaudí, Foc i cendres, which proposes a new look at the architect, an exercise in deconstruction and reconstruction of the myth, the artist and his work, often reduced and simplified to the point of turning them all into a brand.

Gaudí wasn't a mystic absent from the world. He was — and still is — a complex character who carried out his work within very specific political, ideological and aesthetic strategies.

The Museu Nacional d'Art de Catalunya (MNAC) presents a narrative that moves away from clichés and covers the architect's career in its entirety. The new narration frees him, with numerous supporting pieces of evidence, from the clichés and reductionist views with which he has been charged over time, even by many of his contemporaries, who first branded him eccentric, then treated him as a genius and finally considered him "God's architect".

Through a museography based on the theatricality and the accumulation of objects, as if it were his workshop, they are presenting more than 650 elements: works of art; architectural, design and furniture objects; documentation; plans, and photographs from around a hundred national and international collections. New and long-forgotten pieces are presented for the first time – for example, the spectacular entrance hall furniture from the main floor of the Casa Milà, the Bust de la Font d’Hèrcules from the garden of the Pedralbes Palace, the chalk used to model sculptures of the Sagrada Família, or the photographs of Park Güell taken by Adolf Mas that formed part of the Paris exhibition of 1910.

The exhibition, which will travel to the Museé d'Orsay in Paris next March, shows that Gaudí was not a misunderstood genius working in isolation from the world. Quite the opposite, the important research work of the curator Juan José Lahuerta and the MNAC team places him in the international context of the period alongside works by Geoffroy-Dechaume, Thomas Jeckyll, William Morris, Auguste Rodin and Eugène Viollet-le-Duc.

The visit to the exhibition offers the possibility to listen to an audio guide with the deep voice of the actor Josep Maria Pou. You can get your tickets here. Starting on 27 November, guided tours will be offered every Saturday in Catalan (at 12:30 p.m.) and Spanish (at 11 a.m.). Later on, different activities will be programmed around the exhibition, both at the MNAC and in other parts of the city, in collaboration with ESMUC, La Pedrera, the Cercle Artístic Sant Lluc and the Filmoteca de Catalunya, among others.