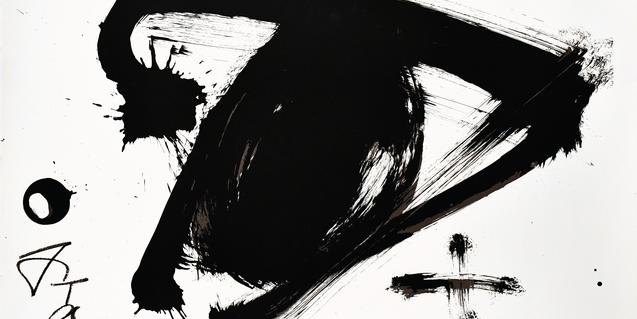 At the end of December 2020, the gallery inaugurated the exhibition ‘Tàpies-Brossa. Lletres, signes, xifres’ which will be there until May.

Galería Eude is celebrating its 45th anniversary with Antoni Tàpies and Joan Brossa. On December 29, 2020, they inaugurated ‘Tàpies-Brossa. Lletres, signes, xifres’, an exhibition that wants to show the complicity and collaboration that these two artists had, two of the most outstanding of the 20th century. The gallery space is transformed into a place of humour, play and magic to create the shared world of letters, numbers and signs of Tàpies and Brossa. The exhibition shows the engravings and lithographs of Tàpies and the lithographs and object-poems of Brossa, intertwined to show the commonalities between them.

You can see works by Tàpies such as Frègoli 9, a lithograph created from the artist’s book of the same name, the etching Lletra O or the carborundum T inclinada. Some of Brossa’s visual poems are exhibited, such as Brúixola or Desmuntatge, and some object-poems such as Camí, represented by the plant of an espadrille, or Copa, a work that refers to the lithograph Frègoli 9 by Tàpies. You can find all this and more in Garlería Eude until May 29, with the possibility of extending it for a few more weeks.

You can visit the gallery free of charge during its opening hours, from Tuesday to Saturday from 10.30 am to 1.30 pm and from 5 pm to 8 pm. If you visit their website, you will be able to see some images of the pieces in the exhibition.