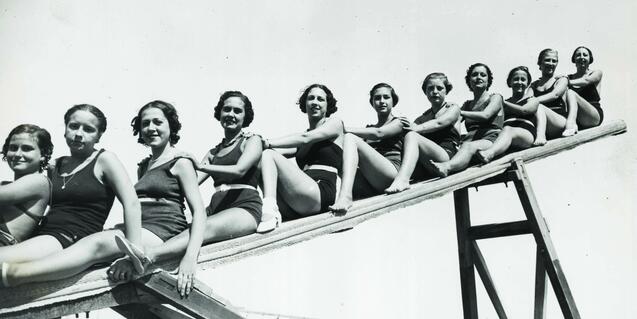 The ICUB analyses the participation of women in cultural activities and their presence in management, programming and creative work.

According to the 2021 Municipal Services Survey, 27% of Barcelona's women take part in activities held in civic centres, 47% in those held in libraries and 52% in cultural activities in general outside these facilities. 53% also take an active part in local festivities. In general, their assessment is positive. Out of 10, they gave a score of 7.7 to the civic centres, 8.1 to libraries, 1.2 to cultural activities in general, and 7 to local festivities.

When it comes to creation and programming, of the 81 festivals that provided data to the Observatori de Dades Culturals de Barcelona, 14 were directed by women, while 17 had a female majority and 25 had equal management.

During the 2021-2022 academic year, women made up 67% of the creators participating in the programme En Residència in Barcelona's secondary schools; 72% of teachers and 58% of mediation team members.

In more detail, women played directing roles in 54 of the 98 shows at the Festival Grec 2021, which represents the highest proportion of all the editions. 60.8% of the spectators are women: they represent 59% of the capacity of the musical and theatre performances, 61% of the dance performances and 73% of the family shows.

At literary festivals, the situation is different. At Barcelona Poesia, the commissioning of the event was 50/50, as was the ratio of participants and speakers. In Barcelona Negra, although the participation of women has risen to 37%, the curatorship was once again entirely male.

In the Biennal de pensament Ciutat Oberta, 54% of the 167 presentations were given by women, as were 56% of the 551 registered people and speakers at the Biennal Ciutat i Ciència. On the other hand, of the 19 people in charge of the artistic direction of the Dansa. Quinzena metropolitana, eight were women. When it comes to the Barcelona Districte Cultural cycle, women have yet to gain presence in the management of the proposals, as 40% were directed by women, 49% by men, and the rest were directed by a collective. Lastly, La Mercè had three women as protagonists: the pregonera, the author of the poster, and the director of the Mercè Arts de Carrer (MAC) festival.

In terms of recognition and public visibility, women accounted for 44% of the awards at the last edition of the Premi Ciutat de Barcelona and occupied 59% of the seats on the jury. Although more men apply for the Montserrat Roig and Carme Montoriol scholarships, the awards were given on a proportional basis. In absolute numbers, the Barcelona Crea grants allocated to women or female-led projects was 37%, ahead of the 32% awarded to entities and the 31% for men or male-led proposals. In 2021, women won the fourth Medalla d'Or al Mèrit Cultural in the last 12 years, compared to the 25 that men have won over the same period.

In term of names, in the last six years, the number of streets and public spaces in the city named after women has risen from 310 to 370, but there is still a long way to go, as this figure represents 8% of the total.

The fourth and last chapter analysed by the ICUB refers to the presence of women within the cultural organisations of the City Council. According to the latest data, women head 83% of libraries, 72% of civic centres, 55% of creative factories, 50% of archives and exhibition centres, 33% of theatres and 29% of museums and heritage sites. At ICUB, 60% of the staff are women, who, in turn, hold 55% of the management positions.

Check this link for more information