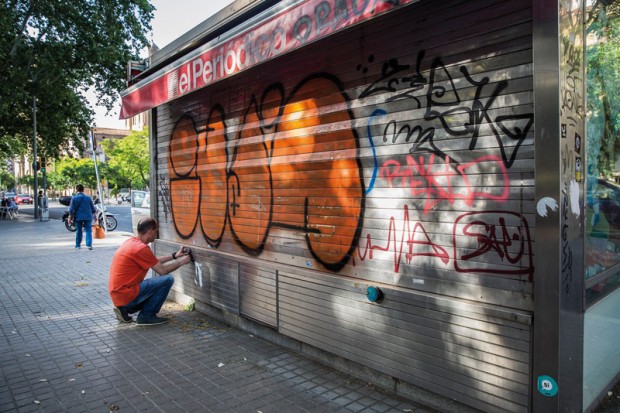 The digital revolution has had significant benefits, but also many victims. These include newspaper kiosks, which are watching their sales dwindle year after year. It’s the result of a paradox: we’ve never read so much (how many of us follow the news on our mobile phones?), yet newspaper sales have never been so low. This can be observed in the latest figures from the Barcelona City Council, which show that of 338 kiosks in the city, 285 are active and 53 are closed, many for some time now. In 1996, there were 440.

“Things don’t look good”, admits Cristina Anés, president of the Professional Association of Sellers of Press in Barcelona and Province (APVPBP), an organization with 200 members including kiosks and stores where newspapers and magazines are sold. The crisis of the printed press, where more and more newspaper staff are laid off, also affects those selling the publications. Printed newspapers have been losing sales for a decade. In 2017, no Spanish paper put out more than 100,000 copies a day, while just a few years ago there were up to five publications that surpassed this symbolic figure. “On Sundays, it was common to sell somewhere between 800 and 1000 copies of La Vanguardia. Now, 25 is the norm”, states Juan Jiménez, president of the Association of Sellers of Press of La Rambla. 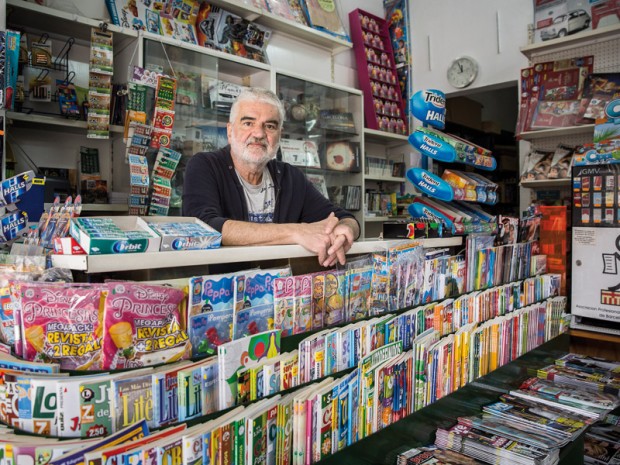 Máximo Frutos, vice president of the Professional Association of Sellers of Press in Barcelona and Province, in his stairwell kiosk.
Photo: Pere Vigili

According to Máximo Frutos, vice president of the APVPBP, the turning point was the start of the recession. “Our regular customers are elderly people –55 years or older– and from 2008 on, sales dropped. In the last decade, about 35% of the kiosks in Barcelona have closed. In the first five years it was gradual, but the last five have been brutal. The metropolitan area has been hit the hardest: 50% have shut down” he declares.

“Everybody’s going through the same thing”, Jiménez states. “The mood? Everybody’s pessimistic. You talk with people abroad and they tell you the same story”, Frutos explains. “It’s a global problem. The way people get informed has changed. With social networks and WhatsApp, now people get their news direct”, Anés says. A conjectural problem (the loss of purchasing power) has combined with a structural problem (new consumer habits), to make an explosive cocktail. “Older people buy less because of the recession, and young people don’t buy at all because they get their news digitally”, Frutos concludes.

On top of all of this is another problem: “10 to 15% of kiosks close because their attendants retire, and there’s no one to take their place”, Frutos explains. “It’s a tough job. You work from Monday to Sunday.” Frutos himself started in the trade when he was just seventeen, and except for his time doing military service, he stayed at the kiosk in front of the Liceu opera house until he retired.

“In 40 years, I never closed. Not even for Christmas. And from 1971 to 1981, I didn’t take a single day off. I started at six in the morning and got off at eleven at night. I saw my kids more at the kiosk than at home”, he remembers. Now, Jimenez’s children run two kiosks, also on La Rambla, but that’s not always the case. Many children of press salespeople aren’t willing to put up with the working conditions involved. “It’s always been a big problem”, Frutos admits. Plus, the young people that join the profession have to deal with terms from editors and distributors that are much more restrictive than what the old-timers get; another of the sector’s big issues.

A loss for the neighbourhood

A closed kiosk is much more than just an empty stand. “When a kiosk closes, the neighbourhood loses quality of life. It’s a meeting place, a point of sale open every day, a source of information”, Frutos explains. Kiosk attendants know the neighbours, and lend a sympathetic ear during tough times. “We’re locals”, he concludes.

To keep from losing everything a kiosk carries with it, a reconversion is needed. “Kiosk attendants need to get up to date; just by selling newspapers and magazines you can’t make it anymore”, Jiménez admits. Everyone in the sector seems to share this diagnosis. The problem is that this forced reconversion still isn’t very well-defined; kiosks have to experiment and see what will help them regain customers. 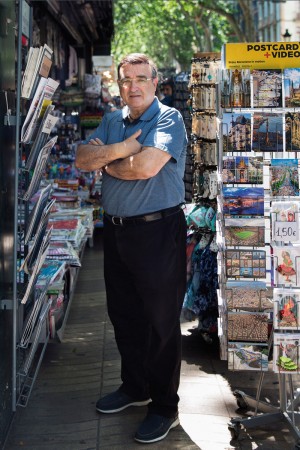 Juan Jiménez, president of the Association of Sellers of Press of La Rambla, who worked at the kiosk in front of the Liceu opera house until his retirement.
Photo: Pere Vigili

As a result, the National Commission of Sellers of Press was created in 2017. It combines kiosks and traditional stores selling press nationwide (but not gas stations or supermarkets where publications are sold). Its goal is to help members join forces through this time of change. “We’re starting to organize with other cities”, Cristina Anés affirms. “There are lots of associations across the country, but the ones from Barcelona, Madrid and Valencia are the strongest, and they light the way. Everyone else looks to see what we do”, Frutos states. Reconversion means adapting to your surroundings: a kiosk in a touristy area isn’t the same as one next to a school or a Metro stop. It also means offering new products –like mobile phone accessories, which sell well– and services. However, young people deal with this change better than old-timers.

The APVPBP has presented a series of proposals to the administration, taking advantage of their position as a broad distribution network open almost year-round. Proposals include a system of screens providing information about the neighbourhood where citizens can pay fines or taxes, but for this to be possible kiosks need to get digital. In the last five years, the Association has digitalized half of its points of sale, which has also helped to better control inventory.

Press salespeople have also proposed that distribution companies consider them as pickup spots. Many kiosks already serve this role informally for neighbours, and get nothing in exchange. “We’re a point of reference”, Frutos declares. Just a few years ago, a study by the National Association of Internet Companies and the Association of Professional Sellers of Press of Madrid concluded that 81% of citizens see kiosks as a good pickup point for their Internet purchases. Meanwhile, kiosk attendants admit that they need to modernize their cigarette machines, which are gradually becoming obsolete, but that they can’t do so without help. The problem isn’t just the lack of subsidies, but also the slow pace of the administration.

Plans to renew and modernize kiosks

In addition to all of these proposals, the Barcelona City Council is completing a strategic plan to decide how kiosks are to be renewed and modernized. The plan will define what new kiosks will be like, what business model they will follow, set possible new uses or organize the introduction of new technology. The goal is to explore alternatives to redefine the current model and make these establishments more viable. This is being done with the collaboration of the sector, and using a study by the Observatory on Urbanization of the Autonomous University of Barcelona (UAB) on how these businesses are treated in other big cities and possible models for the future.

What’s clear is that the future of kiosks is uncertain, and there will be many changes in the near future. Cristina Anés recognizes that many sellers of press, especially the oldest ones, need to “change their programming”, and that the situation is quite difficult: “it’s tough for us to see the light at the end of the tunnel”, she admits, “but we can’t wallow in our sorrows or we’ll never make it through this reconversion.”

One thought on “The (uncertain) future of kiosks” 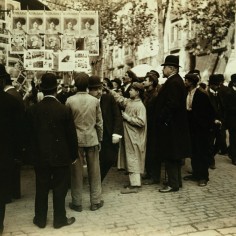 Miniature Paradises: hidden gardens in the city block interiors of the Eixample 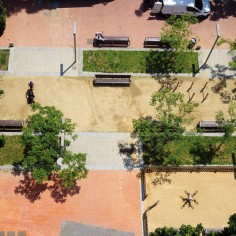 Towards a city without cars 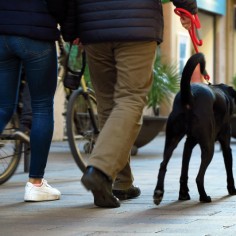 Climate change and air pollution have driven the world’s great cities towards a change in paradigm. After a century of cars ruling the streets, the largest metropolises are starting to restrict their use.

Clandestine and rebellious: women and science in modern Barcelona 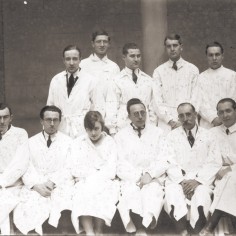 Officially, science was a man’s affair in Barcelona until very recently. This can be seen, for example, in the gallery of names of illustrious academics in the Paranimf of the University of Barcelona, which only includes one woman: 17th-century philosopher Juliana Morell. However, if we look under the surface, we find that women have in fact been involved in the scientific and technical life of the city in many different ways. 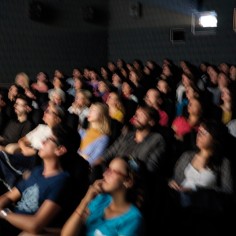 From the 70´s, the historical establishments – neighbourhood cinemas and other, classier, first - run downtown cinemas – came up time and again against the challenge of survival. Throughout this struggle, and over and above the overpowering creeping commercialism, alternative circuits have been established that have allowed new experiences for cinema-lovers while preserving the best of the traditional ones.

The fight against food waste

In Catalonia, 7% of all food purchased by families, restaurants and shops each year is wasted. Food waste is a global problem which can be fought by means of better laws and social projects, in addition to individual and household initiatives. 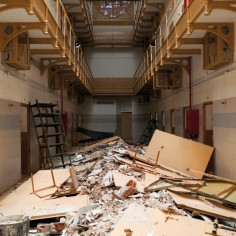 The Model prison has since been emptied of its prisoners. Now, for the residents in this part of the city, it represents both an opportunity and a danger, as they watch to see what sort of restoration will be given to this large chunk of their neighbourhood, following four decades of calls for the prison’s closure in order to make way for amenities, green spaces and schools. 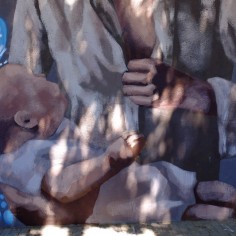 Since the appearance of the first graffiti in the mid-1980s, Barcelona has had a rather tempestuous relationship with this new form of artistic expression in its public space. There are three main characters in this story: the artists, the authorities and the public. In the following pages we will analyse how their relationship has evolved over the last three decades.