Barcelona and the climate crisis

We have to work together

This declaration is the result of a process of co-responsibility and joint reflection carried out by the Climate Emergency Committee.

That committee was set up in July 2019 as a working group in accordance with the City Council Regulation on Citizen Participation, to define specific measures to be developed for tackling the climate emergency effectively. It is also the forum where the City Council will be held to account for any progress made and fulfilment of the commitments it has taken on.

The process of drawing up this declaration has included four working sessions accompanied by 15 discussion sessions. Over 300 people representing some 200 organisations have attended them. In addition, the reports from the discussion sessions are available for consultation on the digital platform Decidim, which has received more than 3,000 visits from different users.

The citizens are committed and driving change with the City Council. But it is not enough. All the stakeholders need to be involved, each one from their own area of responsibility. The other authorities that act in our sphere need to be involved, as does the economic sector, other cities, other states, who must be more ambitious with their emission reduction targets and reach agreement on the instruments and tools necessary for achieving them. We need alliances that will enable us to drastically reduce greenhouse gas emissions and become more resilient.

We need to pave the way so everyone, from their own area of intervention, can advance in the fight against climate change and do what they have to. New regulations are required, along with taxation that includes environmental costs, more investment to reverse the current energy model, and replace fossil fuels and nuclear power plants with locally-based renewable energies. We need political coherence.

We have to work together to step up the action.

We are in an emergency situation

The climate crisis affects our lives and will affect us a lot more. Based on the scenarios analysed, even if we reach the “committed” scenario (reduction in greenhouse gas emissions envisaged in the Paris Agreement), the following is forecast:

Not acting is not an option. We have to achieve the emission reduction set by the Paris Agreement and go even further.

Cities are responsible for approximately 70% of global greenhouse gas emissions, derived from the energy consumption associated with their activity. As a dense, compact, Mediterranean city, Barcelona consumes little energy and generates few emissions compared to other cities but it has a very long way to go. That is due to the fact that most of the energy consumed in the city is generated outside Barcelona from fossil or nuclear sources (50%), while only 5% is from a renewable source.  The same is true of other products and consumer goods, which come from outside the city, meaning emissions from outside the city boundaries have an impact. 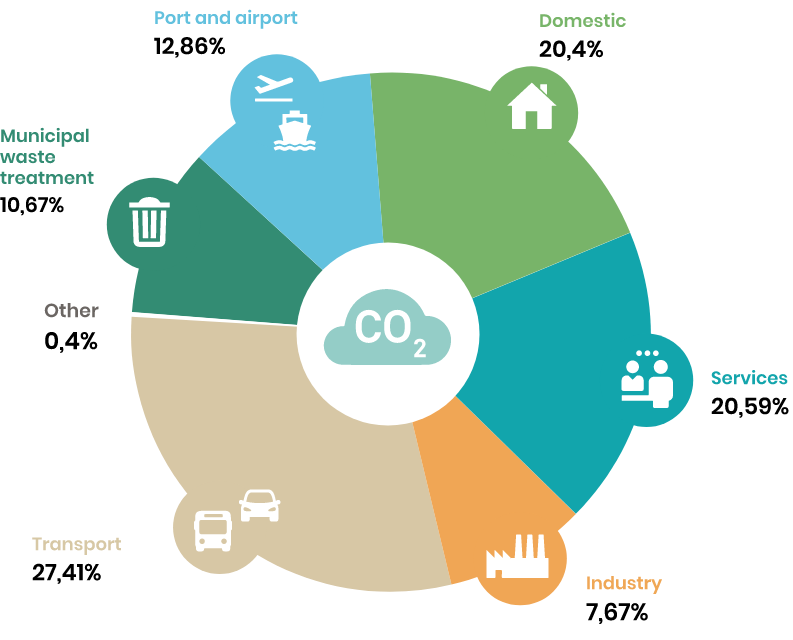 Reducing emissions has to be tackled from every sector but especially transport (responsible for nearly 30% of emissions), the domestic sector (20.40%) and services (20.59%).

These are emissions counted on a city level, but the activity of some infrastructures such as the port and airport also have a big impact.

An approximate calculation of port and airport emissions – the big transport infrastructures – has been made that goes beyond those currently assigned to the city for those infrastructures in the Climate Plan, in order to make them co-responsible. The following graphs therefore include the emissions from their activity, counting flights from Barcelona Airport and the emissions from shipping routes linked to port activity encompassing the routes, which could be four times the city’s GHG emissions.

The first steps: the Climate Plan

The Climate Plan establishes a package of over 240 measures for achieving a target of reducing greenhouse gas emissions by 45% by 2030, compared to 2005, and carbon neutrality by 2050, as well as other adaptation and resilience, climate justice and citizen action targets for 2030.

There’s still a lot to do

Faced with this emergency situation, we need to boost and step up the actions envisaged in the Climate Plan. This is the framework in which the following declaration is presented.