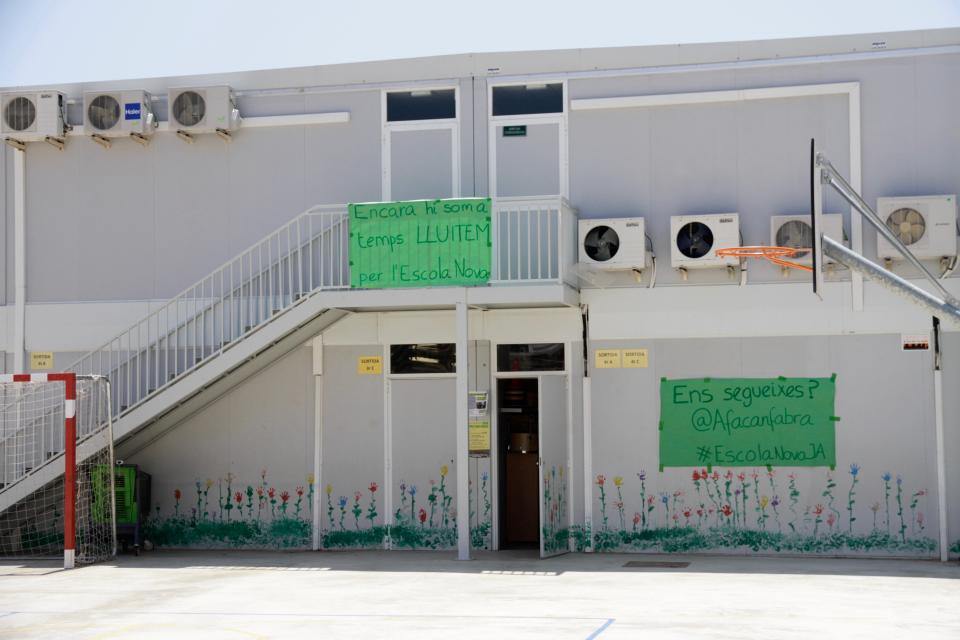 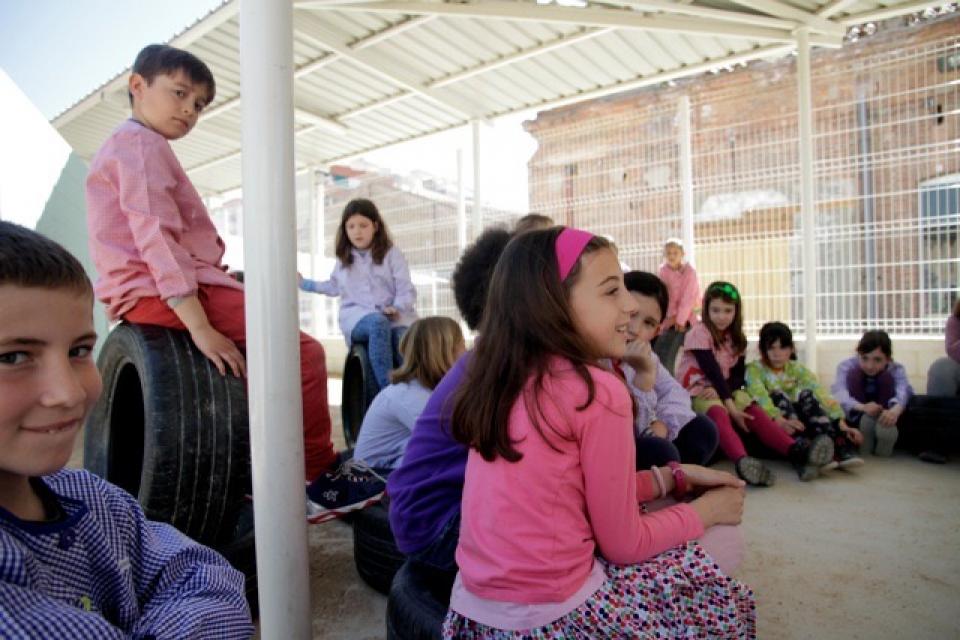 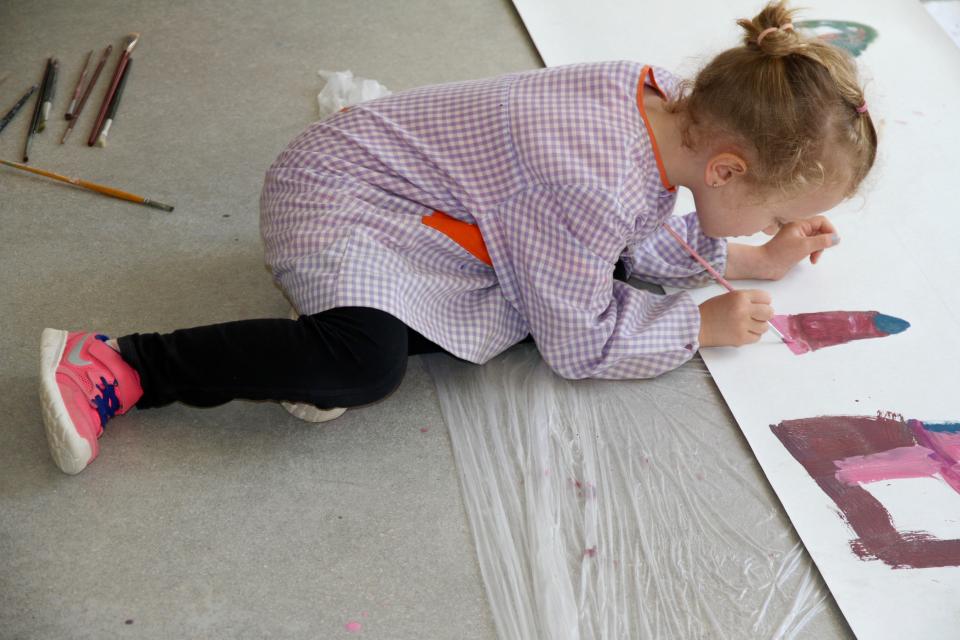 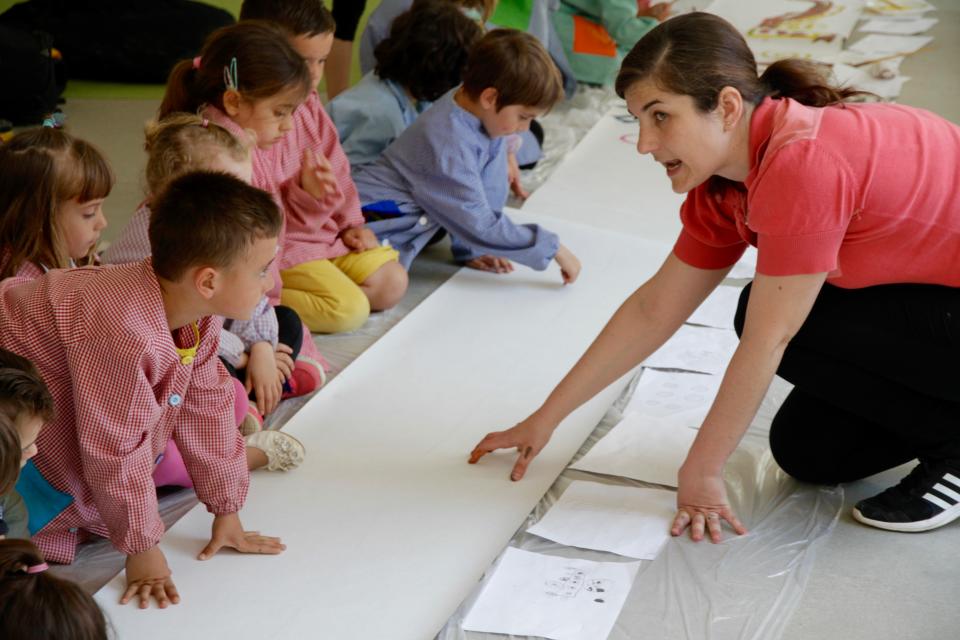 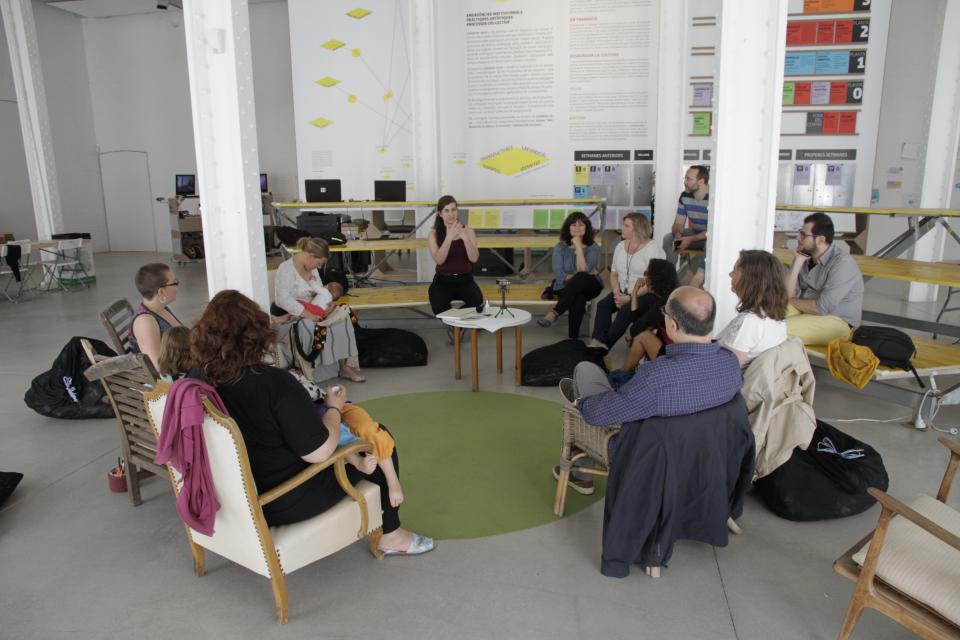 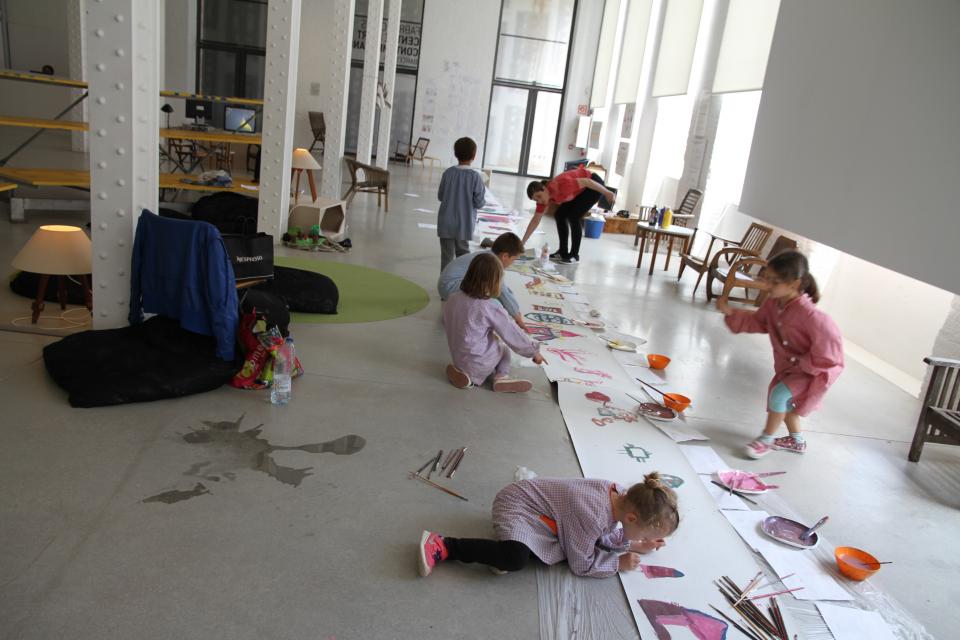 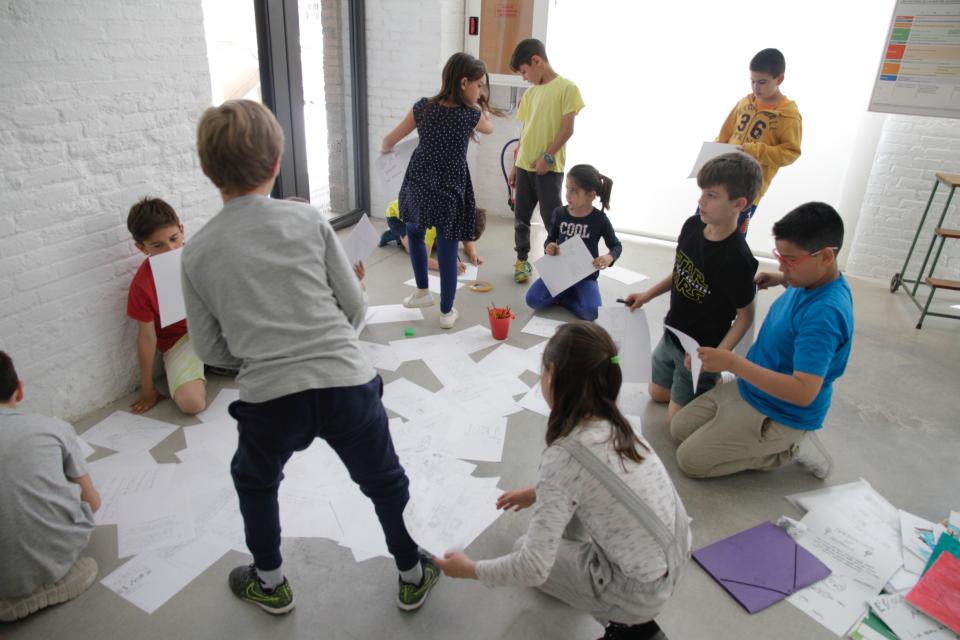 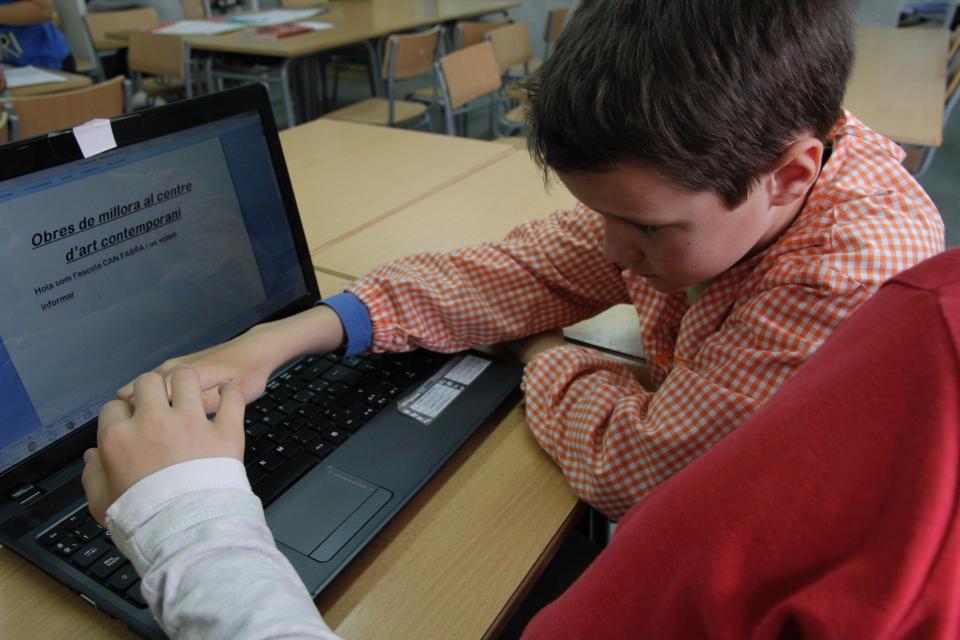 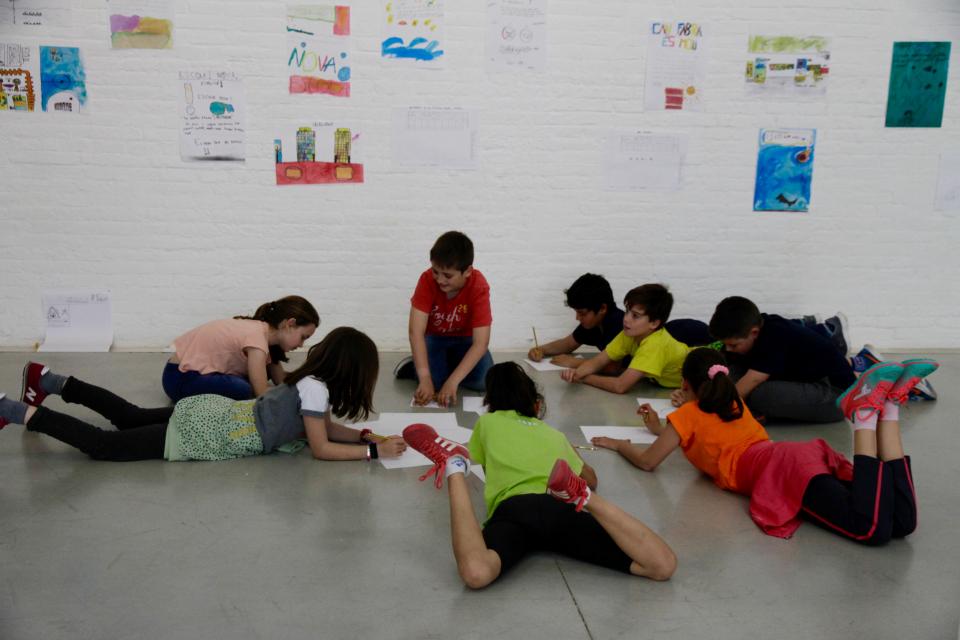 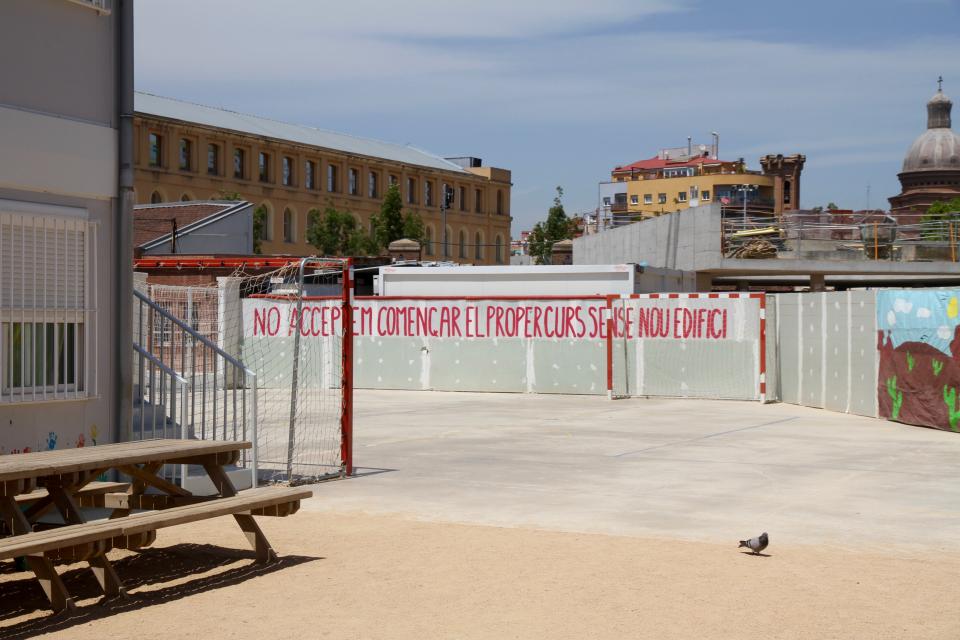 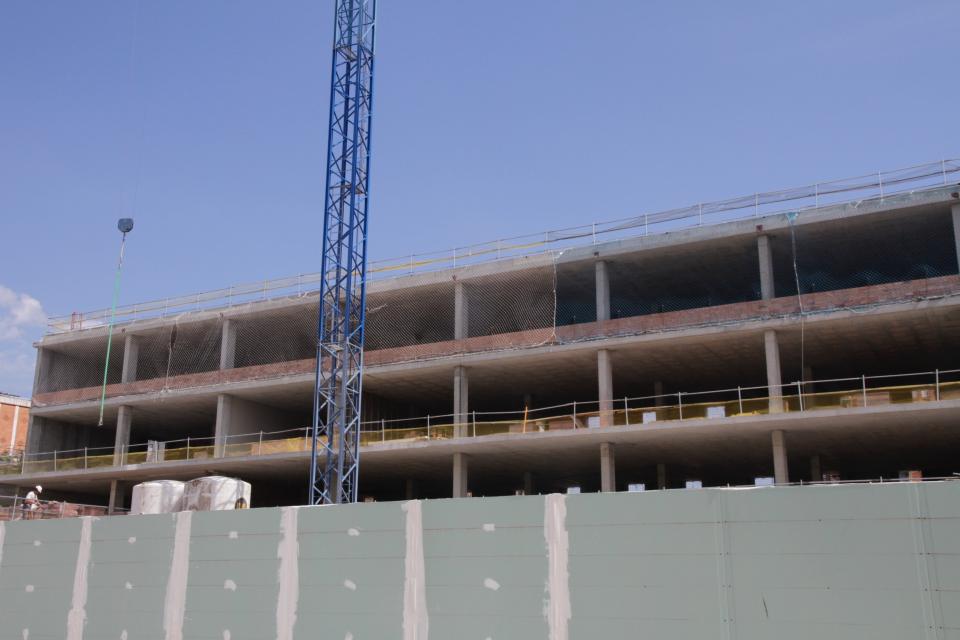 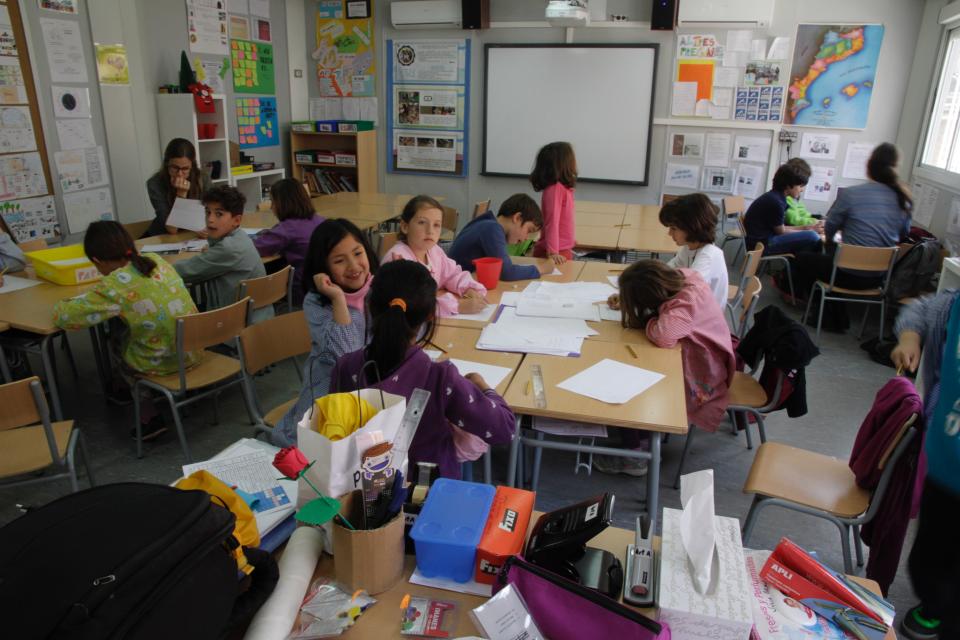 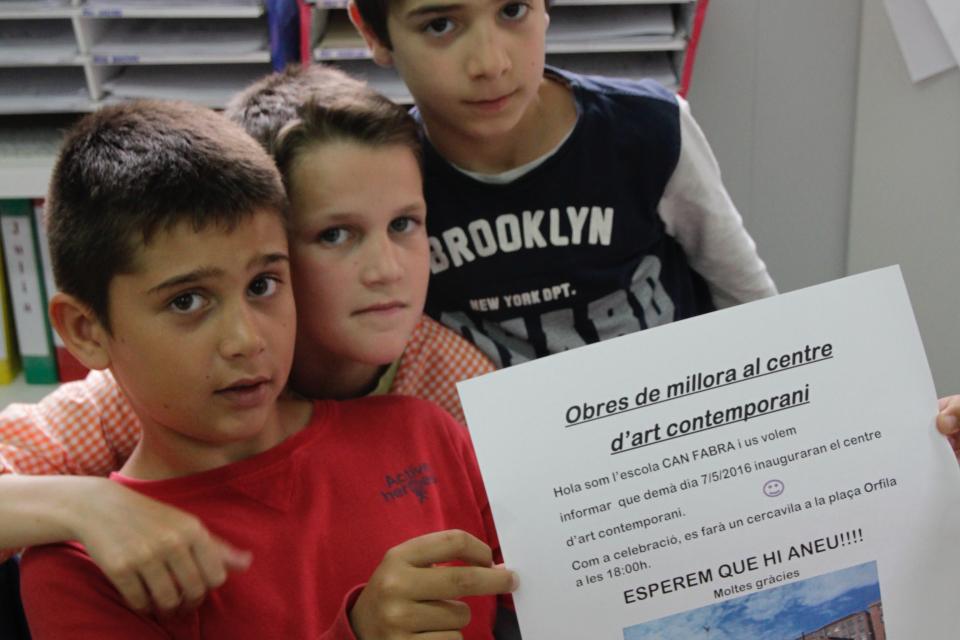 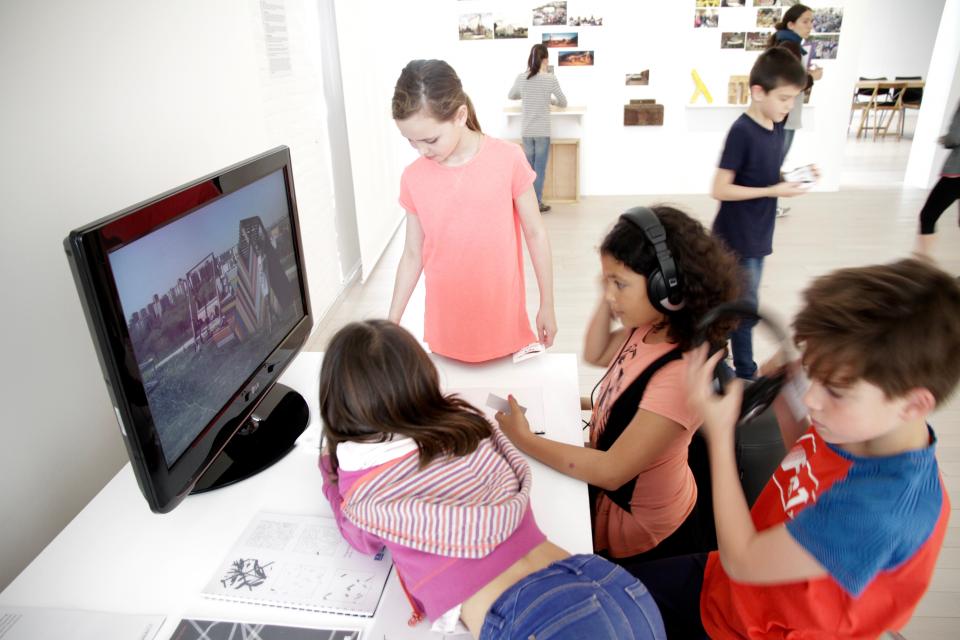 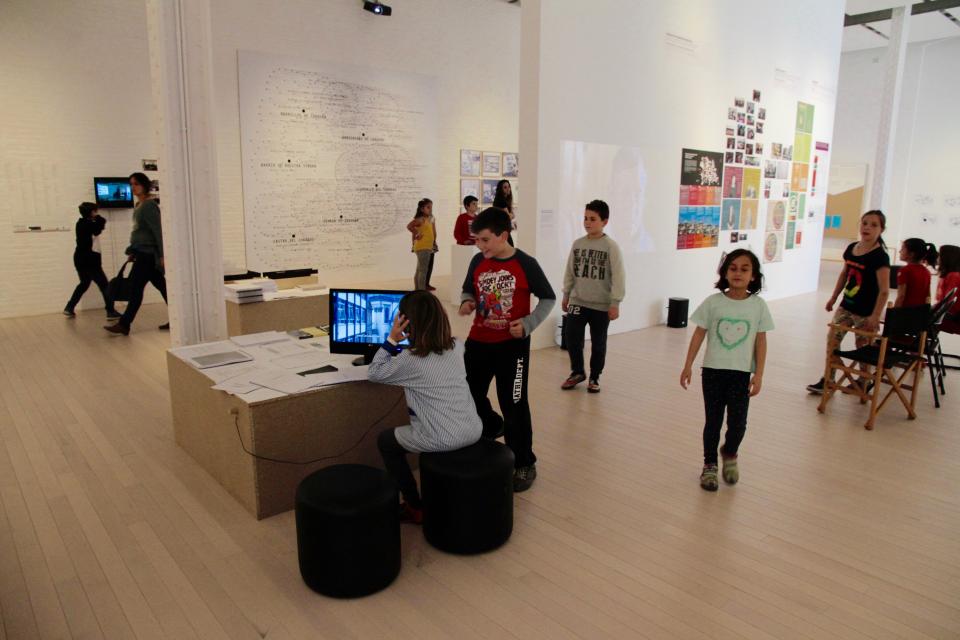 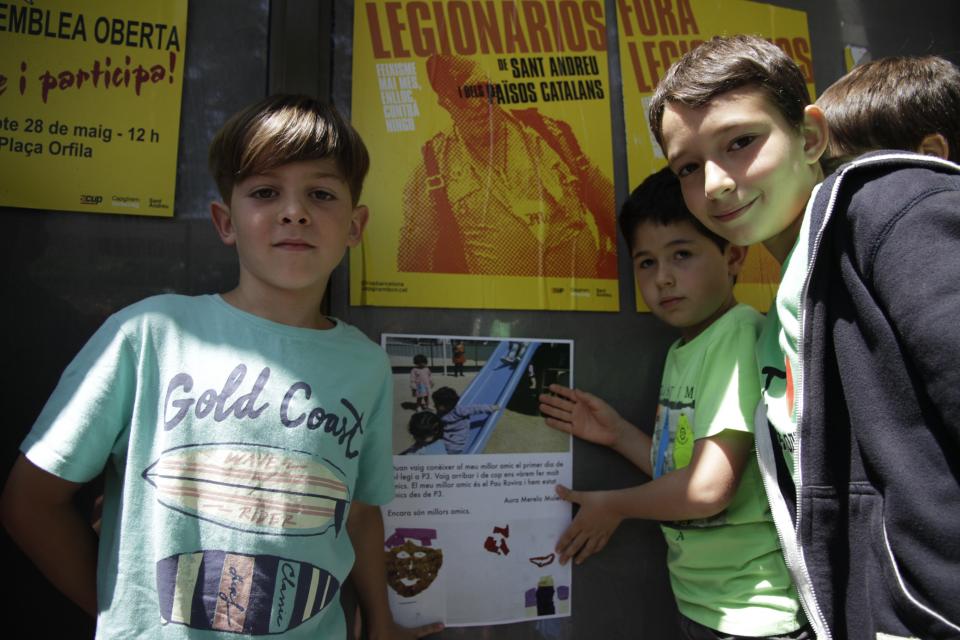 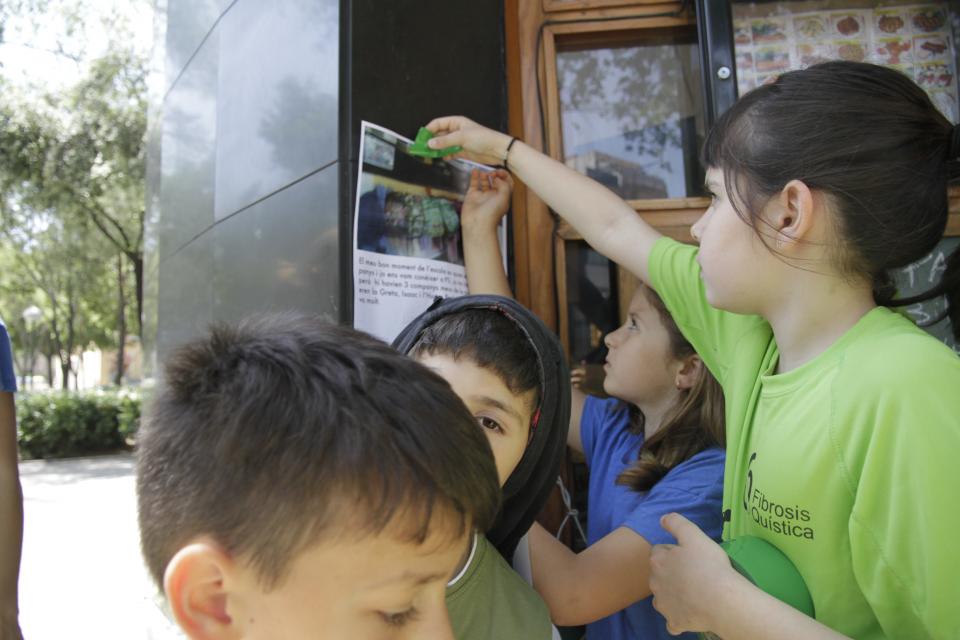 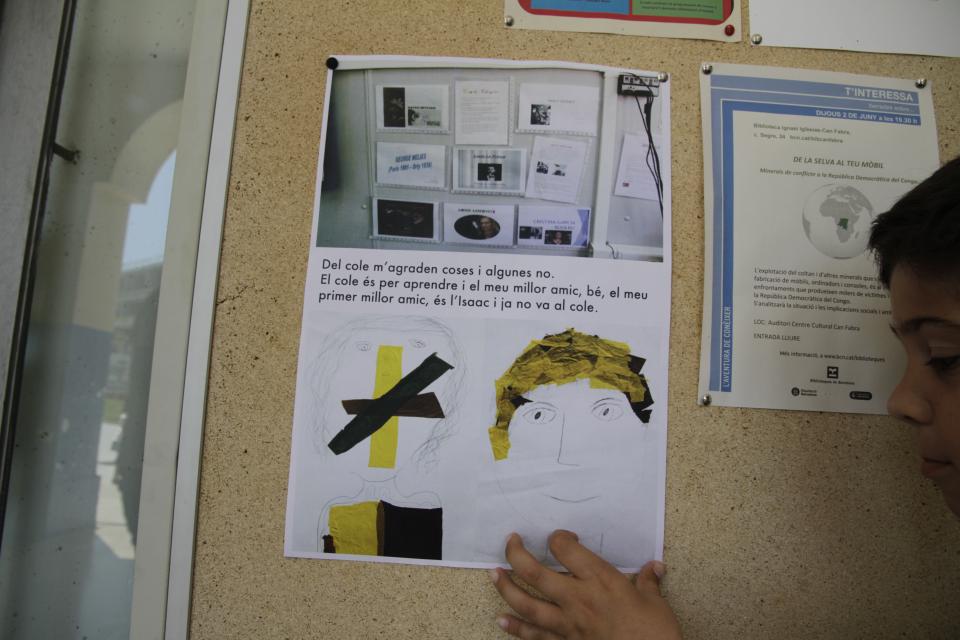 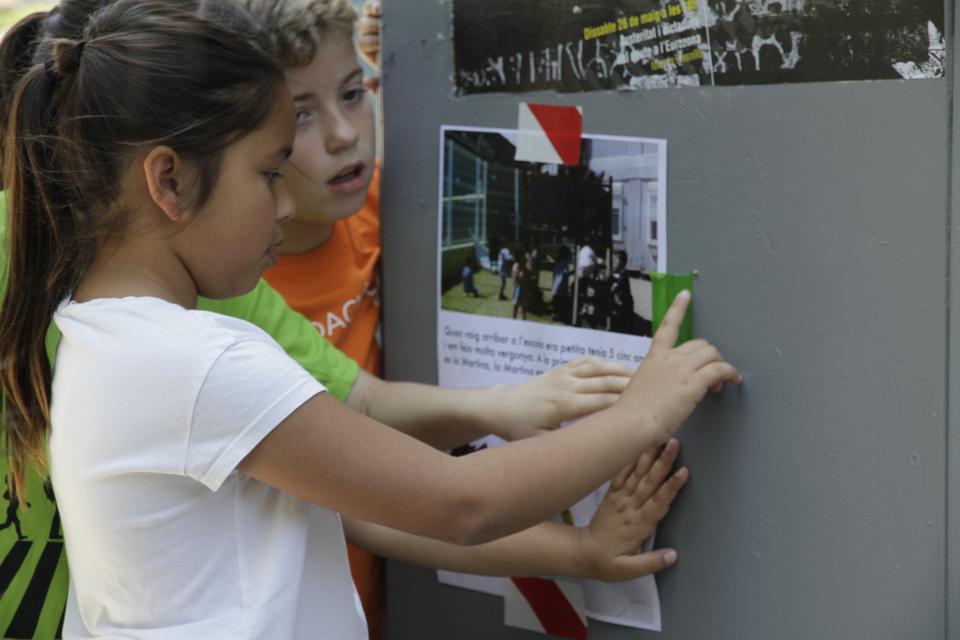 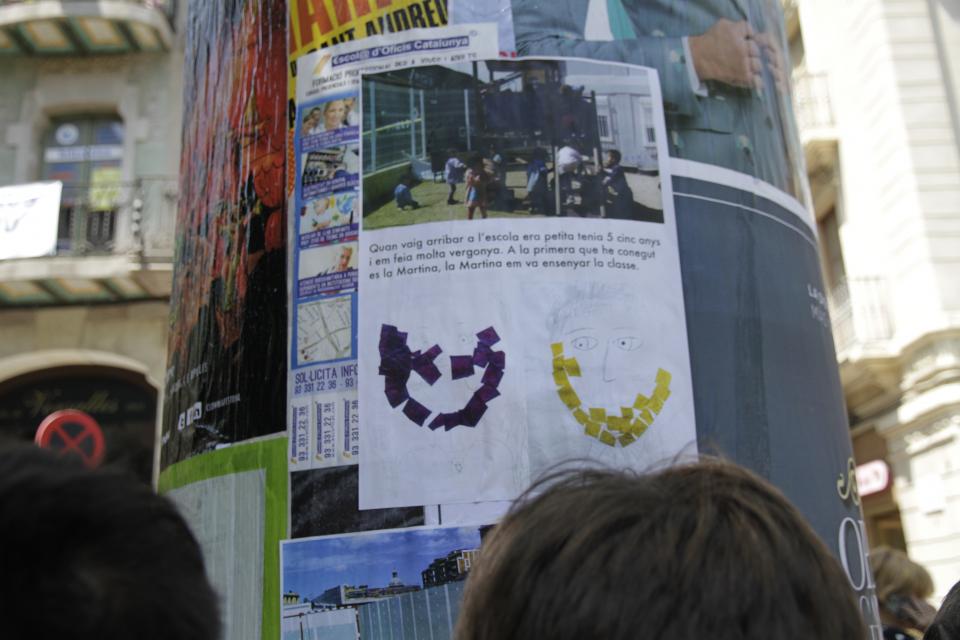 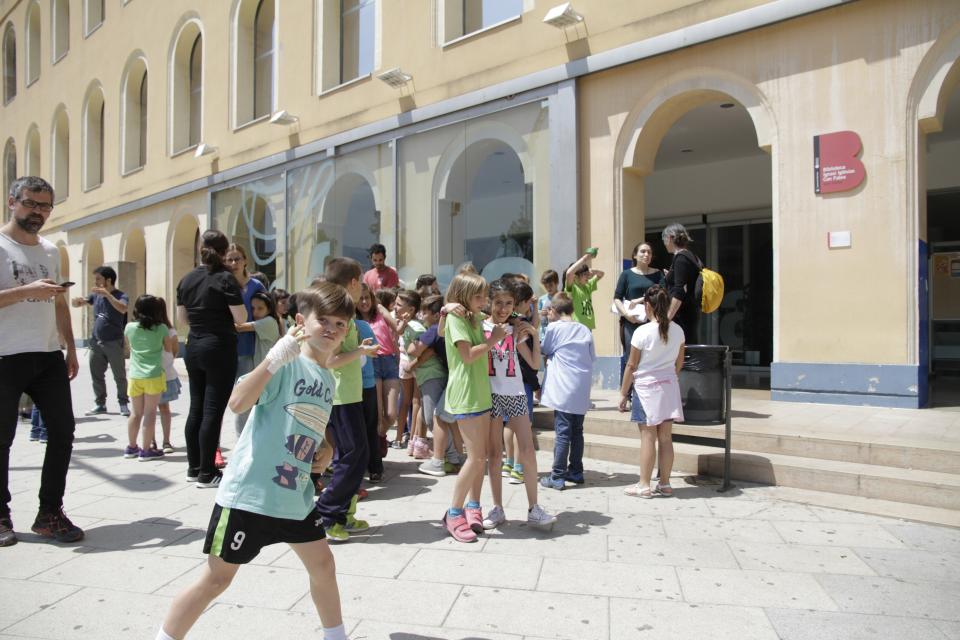 School in movement is a collective research process involving year 3 and 4 students from the Can Fabra School. The object of the study is in fact the education institution itself, which in turn proposes using the art centre as an extension of the school where it can experiment with other forms of learning.

These objectives are based on the fact that, on one hand, the school has been undergoing a period of transition, between the temporary huts it occupied and the new building it moved to at the start of the 2016-2017 school year, following a mobilisation campaign by the education community to force completion of the building works and on the other hand, the unavoidable fact that the school is right next to the art centre, on the same Fabra i Coats industrial premises. For the teaching staff, the move to a new building has detonated concerns about the way spaces condition our way of learning and how the education community can decide and intervene in the construction of the new school. 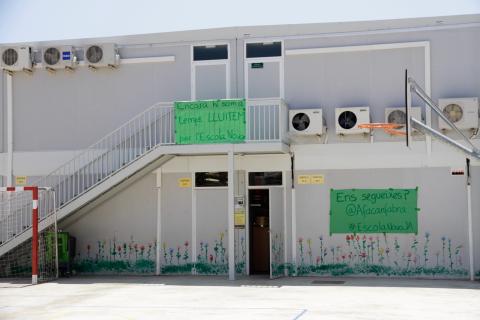 From the start, the project approach was a collective process in which the participation of the school’s teaching staff in the decision-making and definition of methodologies was essential. We initially proposed working on how to change the building as a way of reflecting on what sort of school was wanted, what the current school was like and what the students’ expectations were for the new building.

The teaching staff expressed its willingness to involve the greatest number of groups possible. Given that the project was approached from a long-term viewpoint and not a one-off process to be repeated by the different groups, we proposed developing an accumulative research process, in which each participating group picked up the research project from the point where the previous group had left it. 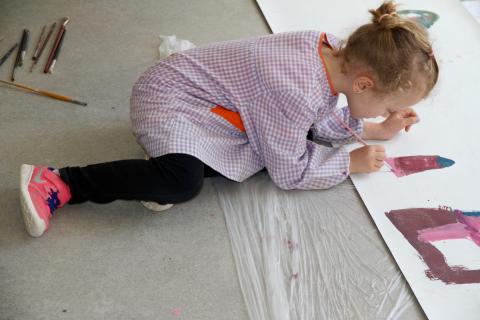 Therefore, as mentioned, the study is based on different questions: What the current school is like? What would you like the new school to be like? What is the memory of the way of doing things that you would like to preserve and recommence in the new building?

Research on the current school

Research on the current school was rolled out in the exploring of its spaces and the people that inhabit them and was recorded using photographs, drawings, sound devices and interviews with the teachers and non-teaching staff. These tools not only built a picture of the centre with images and sounds but were also the pretext for freely visiting it, without adhering to times and schedules established by the school timetable.

This exploration of the school was complemented by visits to explore the art centre, which is close to the school. The objective of this exploration, for the Living In-between team, was to make the centre an extension of the school, and for the students, was based on the motivation to get to know their neighbours. The visits, which began before and continued during the installation of the exhibitions, were also designed as a way for the children to freely explore the space, eliminating the constrictions that typical visit protocols impose on visitors to a museum or art centre and in this way build knowledge as to other ways of making the space habitable through play. 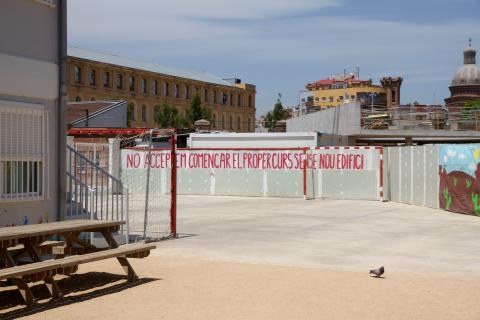 Research on the new school

The reflection on the new school, on the expectations of the students, serves to rethink the way of learning at school and what other ways there are of organising learning and different types of spaces and relationships that could be created. The students’ answers are influenced and conditioned – and ultimately preconfigured – by their experience, in other words, by current education models and by media images and cultures – television series, cartoons, social networks...

The students drew various pictures accompanied by texts in which they expressed their ideas. These creations served as a pretext for discussion and debate.

Research on the school memory

The memory of the children who have inhabited the temporary huts for 7 years – for the oldest, their entire school life – is seen, from an adult’s point of view, as a time of transit that goes relatively unnoticed: the huts disappear and with them the stories and the time the children have spent in this space. To try and deconstruct the concept of the memory associated with the paradigms that, as adults, we have normalised, is also one of the areas of work of the project. 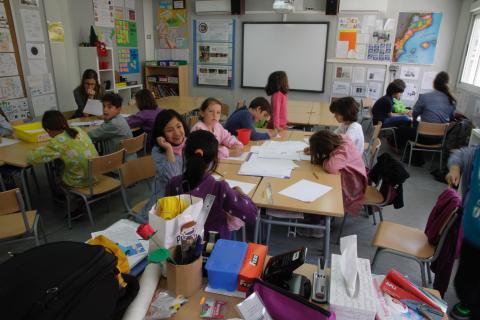 Within the framework of the research on the current school we tried out different tools to share and make social the work process with the rest of the school. Along these lines a series of posters were created that were put up around the neighbourhood in public spaces, which included three elements: an image of the current school, a text relating to the experience of the students at the school, in which they explained situations and stories that have been important to them; and a self-portrait. Each student created his or her own poster. By putting the posters up around the neighbourhood, the project was extended beyond the school and the education community. Whilst walking around the neighbourhood, putting the posters up in shops and information points, the students talked to people and shared their work and thoughts provoked by the project, at a time when the school’s future was up in the air: completion of the new school that would finally replace the huts was delayed and the education community began a protest campaign demanding completion for the start of the new school year (http://www.btv.cat/btvnoticies/2016/06/02/can-fabra-treu-les-aules-al-ca...).

At the end of May, artist Lola Lasurt, who from the start of the Living In-between project has been working on a project about the concept of transition, suggested an activity for the year 1 primary school students based on the idea of the transitional object, inviting a group of 50 school children to visit the art centre. Lola Lasurt proposed painting a giant frieze on which each child could depict a significant object linked to his or her time at the Can Fabra School that he or she would like to keep and take to the new school. The frieze would then be installed on the ground floor of the art centre and the school’s director and teaching staff would be invited to a discussion about the concept of the transitional object, together with the Winnicott Association and other parenting groups from the neighbourhood. 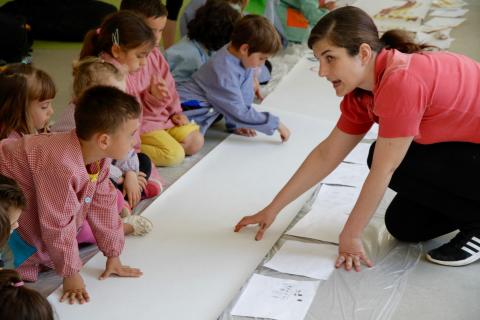 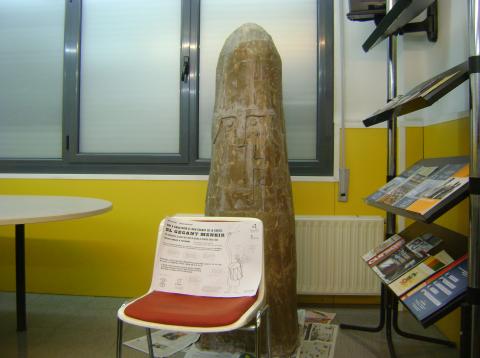