Five murals for equality in science

Five streets in Barcelona show five pioneering Catalan women scientists. In each of them you can find a mural of CientífiqArt, a project promoted by the Catalan Association of Scientific Communication (ACCC) with the support of the Institute of Culture of Barcelona, whose objective is to make visible and value the scientific women of our territory. CientífiqArt has involved five educational centres, where the teachers and students have chosen the female scientists who are the protagonists of the initiative and have lent one of their walls to paint the mural. 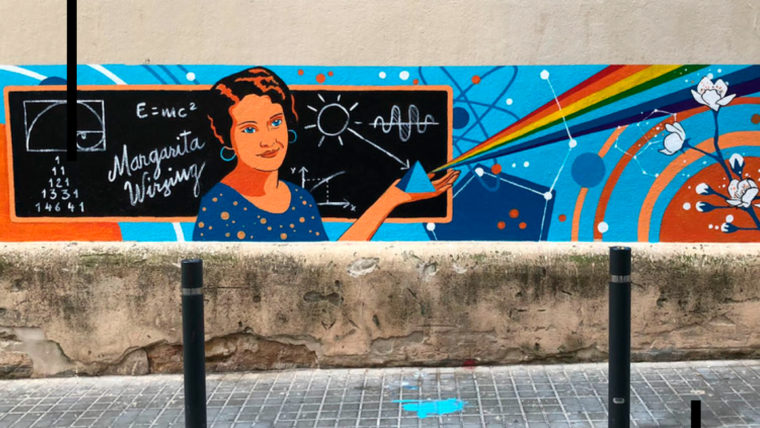 CientífiqArt wants to give women scientists the recognition they deserve and which throughout history has been silenced and scorned just because they are women. Since the dawn of humanity, women have contributed to the understanding of the world and to the advancement of science as a system for gaining new knowledge. However, the merits have ended up going to men close to their research and the names of many women have been silenced and forgotten. On the other hand, women with a scientific vocation have historically encountered many difficulties in gaining access to and promotion in the world of academia and research. In fact, gender inequalities still exist today within the scientific and technological system.

All these facts have motivated the ACCC’s Gender Perspective in Science Group to disseminate the figure of women scientists with the CientífiqArt project. The project shows various relevant women scientists to the citizens who come to the murals in the neighbourhoods, and raises awareness of equality in science. On the other hand, it contributes to awakening new scientific vocations among the students participating in the project, especially among girls and young women, who in addition to documenting themselves to choose the women for their murals, have also been involved in the preparation of a tourist guide to the project. This document invites visitors to approach the five paintings and get to know the women scientists in situ and, to facilitate the visit, a series of audio guides have also been created about each of the researchers.

Within this educational aspect, representatives of the ACCC have given talks in the participating schools on women and science, and have organised the activity Draw a scientist, with which they have been able to study the students’ perception of the scientific profession before and after the project. And to share experiences, coinciding with the last Science Week, the students were able to participate in a virtual conference in which they were able to present the scientist chosen by each school and explain their link with the neighbourhood that hosts each mural.

Dolors Aleu i Riera, the first woman in Spain to obtain a degree in Medicine and a doctorate, Lina Badimon Maestro, physiologist and inventor of the Badimon camera, Maria Montserrat Capdevila d’Oriola, first woman assistant in astronomy at the University of Barcelona, Marta Estrada i Miyares, marine biologist and Creu de Sant Jordi in 2004, and Margarita Wirsing i Bordas, Spain’s first graduate in Physics and Chemistry, are the women scientists represented in the five murals.

The Bernat Metge Secondary School in la Verneda i la Pau neighbourhood, the Ferrer i Guàrdia School in Ciutat Meridiana, the Calderón de la Barca School in Turó de la Peira, the Alexandre Galí School in Barceloneta and Maristes Sants-Les Corts in the Sants neighbourhood are the educational centres that have participated in the project and which display the murals of the respective women scientists on their walls. Four female illustrators have created the murals: Berta Artigal, Raquel Ruiz (la niña wapa wapa), Anna Terricabras (Volianna) and Alba Azaola.