Cooling shelters: an urban response to the global crisis 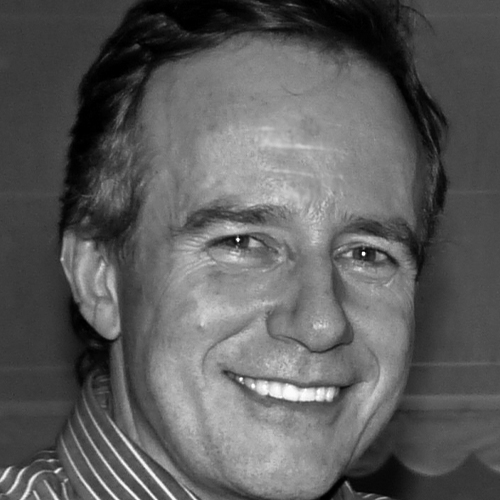 Journalist specialised in the environment, nature and science. He works for La Vanguardia, in the Natural section (environment and nature channel-section) and in the Diners supplement (“De la ciència al mercat” [From science to the market] section).

Cities are engaged in the fight against climate change. Promoting public transport and renewable energies, urban transformation and reducing emissions from combustion vehicles are urgent measures, but adaptation and mitigation measures are also needed to guarantee people’s health and well-being. The setting up of cooling shelters is one of the actions being rolled out in cities such as Barcelona, Brussels, Paris and Rotterdam to provide spaces offering shelter and thermal comfort at critical times such as during heatwaves.

Climate change affects the entire planet, but there are ecosystems, regions and even specific locations where the rising temperatures caused by human activities are more evident and poignant. Big cities are an example of this. And within these cities are districts and neighbourhoods with significant differences in temperature – as is the case in Barcelona –, which bears a greater impact on the elderly and the most vulnerable.

Historically, cities shared relatively moderate climate phenomena, such as heat islands. Such islands are characterised by a slight increase in temperature in urban centres – compared to the thermal gradient of the periphery – owing to the number of buildings, infrastructure, paved areas, motor traffic and atmospheric pollution. Global warming adds to the heat island phenomenon to turn some cities into places that are hard to live in during the summer and, especially, during heatwaves.

Barcelona is no exception. It is rather a negative example of the impact of climate change on cities, an exponent of the need to act locally against global warming. Figures from the Agència de Salut Pública de Barcelona [Barcelona Public Health Agency] (ASPB) reveal that, over the last three decades (the period with the most marked increase in climate change), 150 people die in Barcelona every year on average due to the effects of extreme heat. The year 2003 marked a record for heatwaves in the city, with 13 summer days with temperatures well above average. Specifically, from 8 to 16 August, temperatures exceeded 38°C. 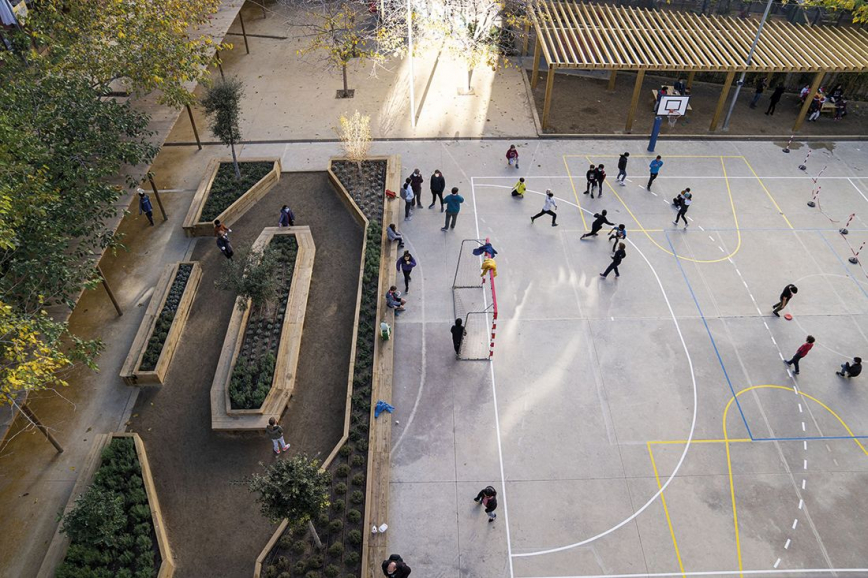 Aerial view of the schoolyard at Els Llorers school, which shows an asphalted area and an area with planters, plants and soil. © Imatges Barcelona / Mariona Gil Salas

The Institute of Environmental Science and Technology (ICTA-UAB) points out that, according to the most up-to-date scientific studies, if the current trend continues, temperatures will have seen an overall rise of 2°C by 2050 (compared to the average pre-industrial levels) and will have climbed a further 3°C by 2100.

The target set in the Paris Agreements (of 2015) is to act on a global scale to limit the increase to 1.5°C on average, but, even so, in cities like Barcelona this figure is clearly exceeded in summer periods, the ICTA-UAB claims. Extreme weather episodes, such as heatwaves, are more frequent now, and will be even more so in the future “and they will especially affect the people most vulnerable to heat: children and the elderly”, highlights the Institute of Environmental Science and Technology.

City responses to the climate emergency

The Climate Plan passed in a plenary session by Barcelona Municipal Council in October 2018, the Climate Emergency Declaration of January 2020 and the 2030 Climate Emergency Action Plan approved in 2021 are responses to this challenge that exerts a growing impact. “The 2018 Climate Plan was a first step to providing the city with tools to adapt and mitigate the impact of climate change, with heatwaves being one of the situations in which the problem of people’s health and well-being comes to the fore”, Eloi Badia, Councillor for Climate Emergency and the Ecological Transition of Barcelona, tells us.

In 2020, there were 70 cooling shelters available to citizens, and in 2021, 155 cooling centres were set up in the city and the goal established in the Climate Emergency Declaration of having 100 up and running by 2024 has been exceeded.

One of the responses foreseen in the 2018 plan was the setting up and development of a network of cooling shelters. In these spaces, premises or outdoor areas, the people most affected by high temperatures can find welcoming and healthy environmental conditions thanks to insulation elements, vegetation, water, ventilation, etc. The goal is to fit out or adapt public facilities to be used as cooling shelters if the need arises. “In critical situations such as heatwaves, not all homes in the city can offer their residents healthy or comfortable conditions, and that is why we have to offer ‘shelters’ in which people have – close to home – a fitted out space that is properly air-conditioned”, Badia points out.

In 2020, for the first time, this network made 70 cooling shelters available to citizens. During 2021, the protocol was updated to be set in motion during the preventive phase of possible heatwaves (in theory, from 15 June to 15 September), and 155 cooling centres were set up in the city and the goal established in the Climate Emergency Declaration of having 100 up and running by 2024 has been exceeded. 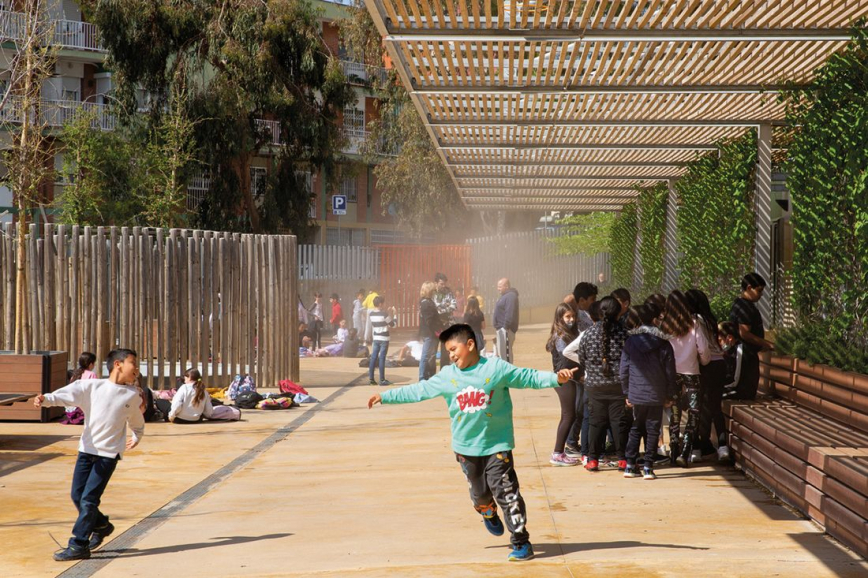 In the yard at the Antaviana school, located in the Roquetes neighbourhood, in Nou Barris, cool-mist humidifiers have been installed to cool down the temperature during the hottest days and to turn the space into a cooling shelter. © Frederic Camallonga

Public schools have been a model space in which to implement the Barcelona cooling shelter initiative.

Public schools have been a model space in which to implement the Barcelona cooling shelter initiative with the promotion of the project Blue, Green & Grey_Adapting Schools to Climate Change, co-financed by the European programme Urban Innovative Actions (UIA). The UIA is an initiative that seeks to find and test new solutions to the challenges of sustainable urban development that prove beneficial for all the members of the European Union.

The Barcelona project – also known as Refugis climàtics a les escoles [Cooling Shelters in Schools] – received a four-million-euro ERDF grant (plus one million euro in municipal funding) and has been carried out from 2019 to 2022. Project participants include Barcelona City Council, the Barcelona Education Consortium, Barcelona Cicle de l’Aigua SA (BCASA), the Agència de Salut Pública de Barcelona (ASPB), the ICTA-UAB, ISGlobal and the Vila Olímpica school, in addition to other departments within Barcelona City Council such as the Institut Municipal d’Educació [Municipal Institute of Education] (IMEB) and the Energy Agency.

As its name indicates, the project plans to take action in schools with a package of blue measures (the incorporation of different water points in the schoolyards), green measures (shaded spaces also in the schoolyards) and grey measures (building modifications to improve insulation or to generate energy). Pupils have been involved in designing climate solutions and in evaluating actions in their schools. They constitute the main target group, which also includes the city’s residents as a whole, since the schoolyards are open during the summer and are integrated into the network of cooling shelters.

While Barcelona put the climate adaptation project into practice in schools, Paris implemented a similar action with the Oasis project, also co-financed by the UIA and with the noteworthy participation of schools.

A team of researchers and technicians from ISGlobal, a centre promoted by ”la Caixa” Foundation, in coordination with the Agència de Salut Pública de Barcelona, has been in charge of assessing whether the adaptations in the participating schools to create cooling shelters have delivered the expected results – such as changes in temperature, humidity or air quality – and “what impact this exerts on health and well-being”, explains Mònica Ubalde, an ISGlobal researcher who has taken part in the project. To draw conclusions, the evaluation process completed in October 2021 has analysed, among other indicators, thermal comfort, pupils’ levels of physical activity and attention before and after the intervention, as well as the use of spaces and the social interactions of students and potential users. 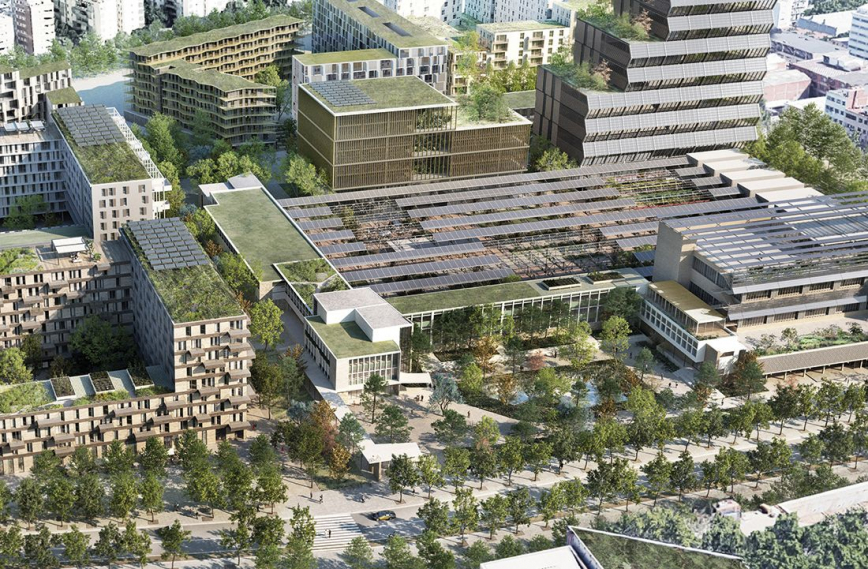 Render showing the transformation of the former Mercedes-Benz car factory space to convert it into an area adapted to climate change. © Conren Tramway

The conclusions of this scientific evaluation are still being compiled and prepared for official publication, but Mònica Ubalde informs us that the findings have been positive in many respects. Two of the conclusions that can be drawn from the rolling out of the cooling shelters in Barcelona since the project’s outset are, on the one hand, the need to work not only on setting them up but also on their constant maintenance and improvement, and, on the other, leveraging the knowledge acquired from setting up the schoolyard cooling shelters to expand the network and the corresponding facilities to other public spaces. “Schools are strategic locations distributed throughout the city, and many of the things that have proven effective as cooling shelters in schools can work in other spaces”, concludes Mònica Ubalde.

A second scientific project, in this case coordinated by experts from the Universitat Oberta de Catalunya [Open University of Catalonia] (UOC), is also working on the analysis of the transformative impact of climate action measures such as those being implemented by the Refugis climàtics a les escoles initiative. In this case, the project is called CoolSchools. European in scope (covering schools in Brussels, Paris and Rotterdam), it enjoys the participation of 16 partners, including city councils, universities, research centres, associations and social cooperatives. The research has funding of more than 1.5 million euro for the next three years, provided by the European Fund Urban Transformation Capacities (JPI Urban Europe), in which the State Research Agency participates.

Isabel Ruiz Mallén, head of this project and Ramón y Cajal researcher at the UOC’s Urban Transformation and Global Change Laboratory (TURBA), explains that “the solutions that are being implemented aim to protect pupils from the risks arising from climate change, and improve schools’ adaptation in this new context”. “What we want to see from the actions that are being implemented in these four cities is the impact that these actions have in terms of urban sustainability, resilience to climate change, social justice and the promotion of quality education”, describes the expert from TURBA, a UOC group that concentrates its work on the analysis of socio-environmental and technological urban transformations from a critical and interdisciplinary perspective. Beyond specific actions, the researcher Isabel Ruiz Mallén recalls that these socioeconomic transformations in schoolyards “aim to be revitalising social changes in urban districts and to act as catalysts to also transform homes and the neighbourhood.”

The incorporation of measures in line with the adaptation response to climate change is planned in the former Mercedes-Benz factory, in the Sant Andreu district.

Cooling shelters are necessary actions, but are sporadic; another part of the process of adapting cities like Barcelona to the new conditions brought about by climate change. The city as a whole, and its urban planning in particular, must guarantee conditions to achieve optimal health and well-being in light of the climate crisis.

One of the urban development projects being developed that seeks to incorporate actions in line with this adaptation response to climate change, including cooling shelters, is the one occupying the former Mercedes-Benz factory, in the Sant Andreu district, a block demarcated by the streets Sant Adrià and Ciutat d’Asunción streets and Passeig de l’Havana, with a surface area of 90,641 m2.

In the spring of 2021, the municipal government signed an agreement with the Conren Tramway company, owner of this disused industrial space since 2007, to give impetus to the transformation process in a new urban fabric with community and productive uses. According to Conren Tramway, the project will meet the most demanding sustainability criteria in line with the sustainable development goals of the United Nations 2030 Agenda and the New European Bauhaus. The latter brings a cultural and creative dimension to the European Green Deal to demonstrate how sustainable innovation offers tangible, positive experiences in our daily life.

Journalist specialised in the environment, nature and science. He works for La Vanguardia, in the Natural section (environment and nature channel-section) and in the Diners supplement (“De la ciència al mercat” [From science to the market] section).