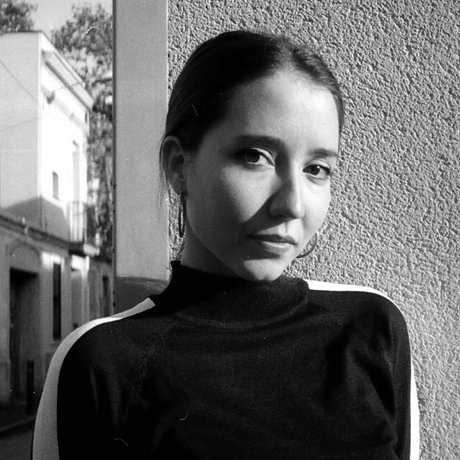 Anna Pacheco (Barcelona, 1991) is a journalist and writer. Her texts focus on social issues, feminisms and popular culture with a class and gender perspective.

If Diamante Trivallo had ever been told that she was going to spend a lifetime in the same job, she’d have been very upset. Luckily she wasn’t told. Diamante has always liked to have the feeling that things can change, that she has control over her own existence. And spending thirty years doing exactly the same thing, conceptually speaking, is crippling. But if you aren’t told and life goes on, because life always goes on, like the life of Diamante Trivallo, then everything becomes bearable and even pleasant. Things must happen fast and without anyone telling you. So today is her last day at work, today Diamante Trivallo is retiring.

Every time Diamante has to recover a forgotten password, she answers the question “What is your ideal profession?” and she still writes Journalism. Now that makes her laugh. Diamante Trivallo wanted to be a journalist, but a real journalist. She never was, never, not for a thousandth of a second, not even in jest. The thing is that Diamante wrote really well. Well enough to make you cry. She wrote so well that a friend of her father’s told her at a wedding that she’d be really good at something else. He did so after a speech in which Diamante Trivallo had made all the guests cry, it was so moving that the groom had to stop to go to the bathroom three times. The priest who officiated the union said he had never seen anything like it before. The bride also cried, unremittingly, like a drip, like a sprinkler on a timer. The groom, on the other hand, sobbed like an emotionally unfit person, that is, like men cry, mini strokes, so intense that they simply forced the groom to hide and to interrupt the ceremony for five or ten minutes. It was a mess. The kids, the bridesmaids, hid under the church pews and cried like children, unbearably and snooty-nosed. They held hands and shivered with the cold. A five-year-old nephew of the bride, Estebanín, between one wail and the next, wondered aloud: “And so what’s love for then?” Everyone covered their eyes so they could keep sobbing. Mothers-in-law collapsed on the floor like a sack of potatoes, downright woozy. The women guests’ make-up ended up a right mess, so the wedding, on a whole, ended up losing its festive mood and became pretty dismal and rubbish. The women’s faces were smeared with mascara, they walked around like blackened zombies, arm in arm. The guests had wobbly legs and blank stares on leaving the church. People couldn’t stop crying, they just couldn’t stop. For months, the guests tittle-tattled about the wedding, not to find fault with the catering or the wedding dress. All they could remember was Diamante, the bride’s friend. That weird speech. About love, but not. “The fuck up was brutal, it was brutal”. After the wedding, ten people got divorced.

— Do you believe in God?

“Diamante had a fairly standard beauty, quite tall, plump, athletic arms and long brown hair almost down to her backside.”

A friend of Diamante’s father, Mr. Mondrón, took her straight to the Sancho de Ávila funeral home. Without realising it, that wedding had been Diamante’s first day at work. She had, without a doubt, been recruited. Mondrón assured that Diamante had to pursue it professionally, that what she had said that Sunday at the wedding had more to do with death than with life. Pursue it? But what is it? Pursue what? Diamante’s father didn’t understand a thing and, like all parents, his overriding fear was that his daughter would end up selling herself. Diamante had a fairly standard beauty, quite tall, plump, athletic arms and long brown hair almost down to her backside. Diamante was what was called a pretty girl who sometimes made strange decisions. For example, on the infamous wedding day she decided to wear a dress in a galactic colour with handheld thornbird wings. Diamante said she did it for the bride, because Cristina really liked birds. Nobody got any of that and the older people took it as an insult. Diamante did not come off well at the wedding, but at least she got a job and one that was quite well paid.

The funeral home offered a “secular ceremony” service for approximately 3,500 euros for the full plan, without many extras. Coffin, ceremony, flowers and some coffee and biscuits for the wake. That was the department that Mr. Mondrón had intended Diamante Trivallo work in. She would be responsible for writing the eulogies of the deceased. The process was simple: interview family members, find out the most poignant details and move people to tears. She was offered an indefinite contract. Diamante, very poetically, burst into tears. She signed it straight away, called her father to tell him and started that very afternoon with two old folks who had kicked the bucket at the age of 90 and 87. She was told that this was a “typical” day. Diamante loved it. She found out that she would almost always have make corrections at the widows’ request. One of them, Florencina Malogrado, told her to take out the part about her husband being brave and admired. “Sweetie, the thing is that my husband was a scoundrel”, she was told, “better just say that he was a gentleman”.

“At the funeral home, Diamante Trivallo found out that people aren’t so good even after death.”

At the funeral home, Diamante Trivallo found out that people aren’t so good even after death. She learned to read the tearful eyes of relatives, to identify the family’s ghosts and most hidden secrets. Her sense of smell sharpened so much that, over the years, she could really tell if the dead person had been friendly, romantic or hardworking. She was familiar with them all. She had created a beautiful template text for relatives of those who had died of cancer, not that the text gave much hope, but it didn’t take it away either. It cannot be admitted out loud, but of course she liked writing eulogies for young people who had passed away. They were like gala performances for her. Diamante Trivallo became very popular, the deceased came from the rest of Spain to be praised one last time with the words of Diamante Trivallo. The funeral home increased its profits by 250% the first two years. They gave her a raise.

She’s retiring today. Diamante Trivallo has looked at herself in the mirror, repeating, for the last time, the routine of getting ready at 7.35 in the morning. Her face is the face of a 65-year-old woman. Short hair, now grey. She has dressed in her usual jeans and a baggy, white blouse. Over these years she has learned that dressing discreetly is a sure-fire way to make people pay attention to her eulogies and just her eulogies. Diamante Trivallo has bought chocolates and ham and cheese croissants, and has cooked her scrumptious potato omelettes. Today will be a special day; the mere notion of saying goodbye to her colleagues makes her terribly sad. Everyone is invited. Receptionists, psychologists, drivers, embalmers and undertakers. The whole staff except Mondrón, who passed away. It is even said that two journalists will come to write a feature about Diamante Trivallo’s last day.

Needless to say, she has prepared a farewell text to leave all those present in tears.

On seeing her arrive, the receptionist, Mercè Quintana, greets her as she does every morning, looks at her with a radiant and very proud smile and tells her that today’s her day.

— Diamante, darling, you’re in luck. Today: a boy of seven, a grandfather with a large family and a good pancreatic cancer — a first fit of crying comes over Mercè, blubbering, her voice shakes and her eyes well over with tears, the kind of crying that makes your nose run, but Diamante has it under control —. See what I’m like already, I’ve just seen you and I already want to cry. We’re really going to miss you!

Anna Pacheco (Barcelona, 1991) is a journalist and writer. Her texts focus on social issues, feminisms and popular culture with a class and gender perspective.