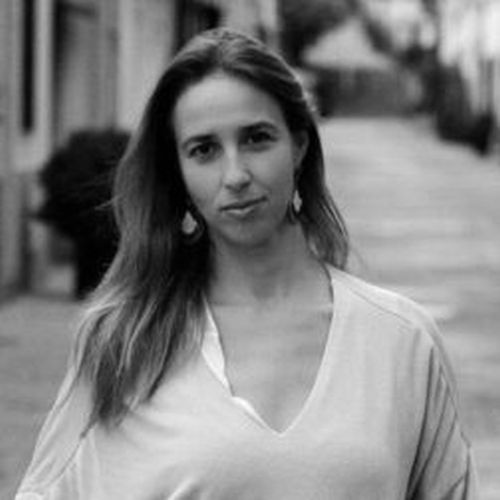 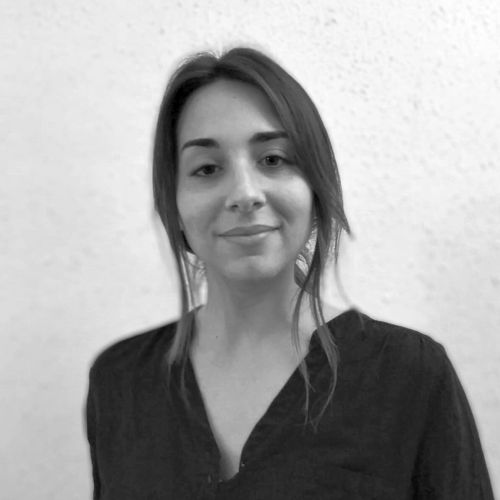 Albert Martin Design (Storydata)
In 2020, Barcelona broke the all-time record for centenarians: 863, 85% of whom were women. Ageing, together with young people’s difficulty in leaving the family home, the rise of civil marriages and a young foreign population concentrated in the suburbs are some of the key parameters that provide us with figures to ascertain how the city’s inhabitants live and change.
The COVID-19 outbreak has marked a before and an after; thus far, the impact of the pandemic has led to 4,217 more deaths than expected in 2020, but this experience will most likely change the way we live and coexist in the city.

Evolution of the population

On the basis of the last census, Barcelona’s population amounts to 1,666,530 inhabitants. In just over a century, the city has tripled its population. According to Barcelona City Council’s Department of Statistics and Data Dissemination, at the beginning of 1900 the city had just over 500,000 inhabitants. From that point on, it began to grow significantly, but, contrary to what it might seem, growth has not been continuous. Regressions are also palpable.

Since 1979, the city has suffered a sharp decline and a gradual recovery. If we refer strictly to the number of inhabitants, today’s Barcelona is the same as the one in 1990. The Eixample has been the most populated neighbourhood for at least forty years. It is closely followed by Sant Martí and then by Sants-Montjuïc, Horta and Nou Barris. However, the Ciutat Vella district best exemplifies one of the problems facing the city, namely, gentrification. This neighbourhood has lost 42% of its population since 1970. Its average age, on 1 January 2019, was 27 years old. 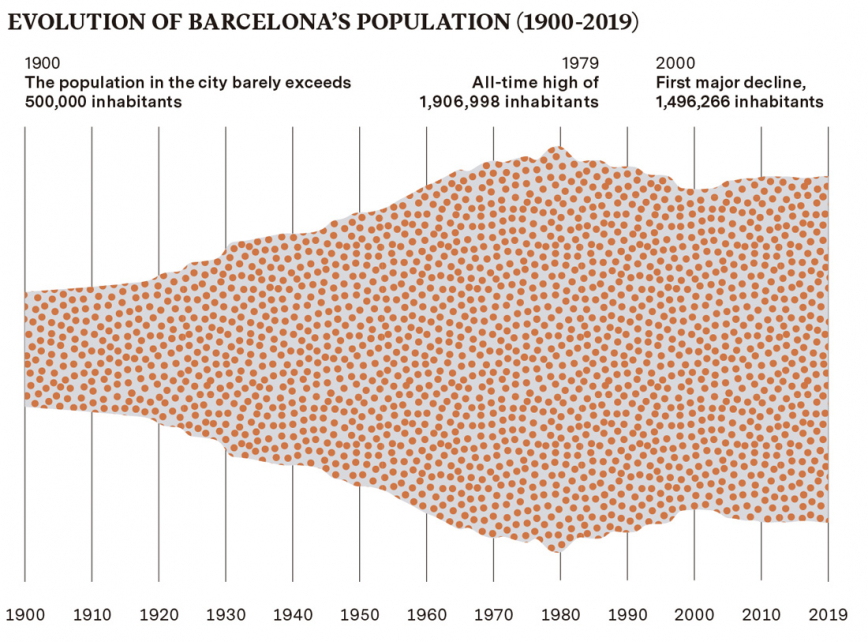 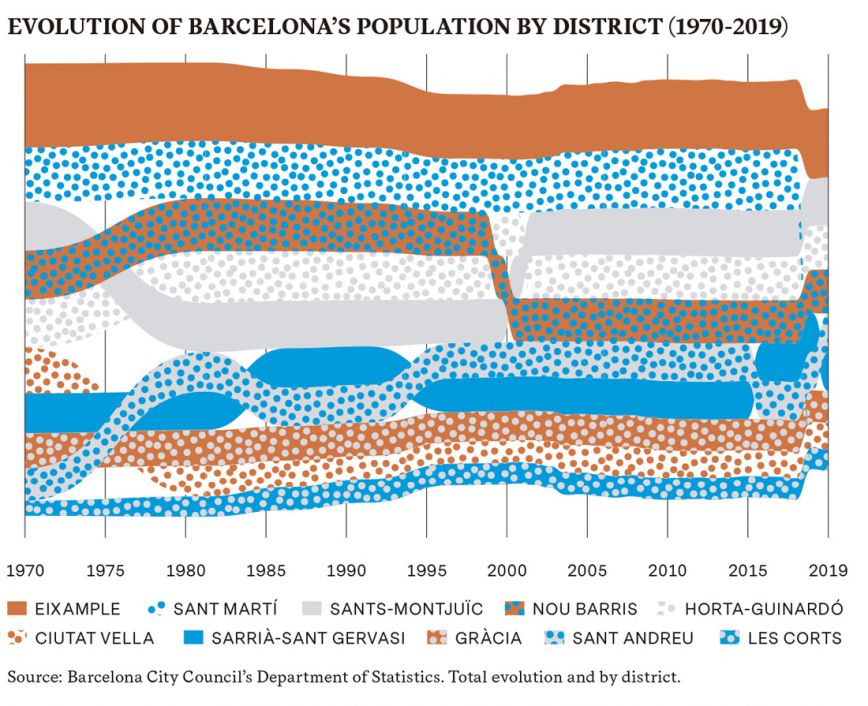 The elderly population is growing within the metropolis. One in five people living in the city is age 60 or over. It is estimated that, by 2030, it will be one in three, and that 66% of people over the age of 80 will be women. The proportion of young people, on the other hand, is steadily declining. Since the early 1990s, as the elderly population rose, the young population fell. Currently, according to the Open Data BCN statistical portal, the percentage of the population aged 15 and under is less than 14%.

One of the major distinguishing features of foreign inhabitants is, without a doubt, their age. Data from the BCN Open Data statistics portal indicate that, overall, the largest age group in Barcelona is 40 to 44 years old. However, it would be severely unbalanced if it were not for the significant size of the young immigrant population, which is increasing the population in the 20 to 30 age group. Without a foreign population, the largest age group would be 45 to 49 years old. 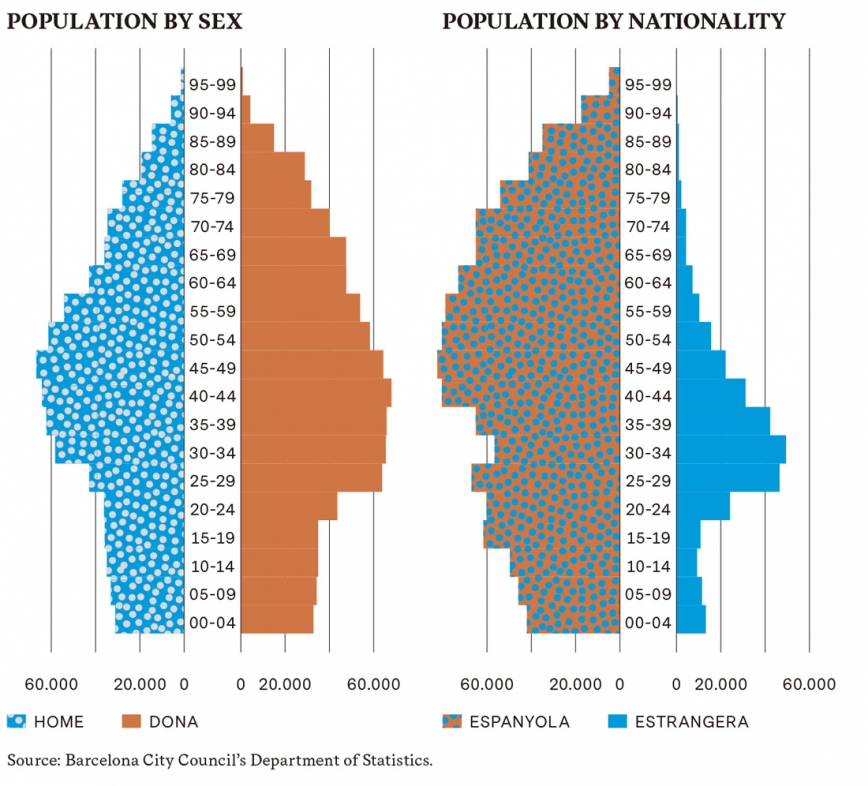 Half of Barcelona’s residents are born outside the city

In 2020, almost 30% of the city’s inhabitants were foreign nationals. Of these, one in two came from a non-EU country. The native population was 47.9%, which means that, today, more than half of Barcelona’s inhabitants were not born in the city. 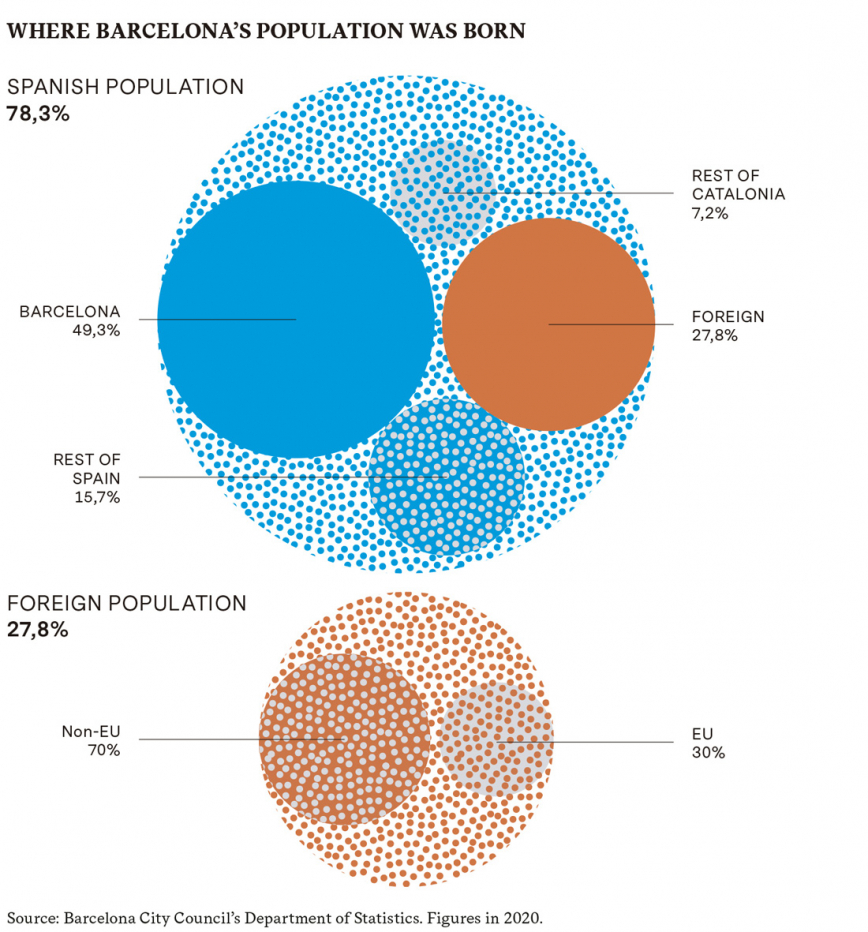 The foreign population is unevenly distributed

Certain areas of Ciutat Vella, the Raval and one in particular in the Provençals neighbourhood of Poblenou have a percentage of foreigners of 45% or above. The predominant foreign nationality is Italian, distributed homogeneously throughout the city’s central area. Pakistani is the second, established mainly along the Besòs River. Chinese is the third and is located at the ends of the Llobregat and Besòs rivers. The fourth, Honduran, is concentrated in the north of the city, where other South American nationalities also come together, as well as Moroccan and Pakistani.

Thus, the more peripheral the area, the more diverse the nationalities are. Also noteworthy is the grouping of the French population in the northwest of the city, corresponding to the neighbourhoods of Les Corts, Pedralbes, Sarrià-Sant Gervasi, Vallvidrera, Tibidabo and Les Planes. 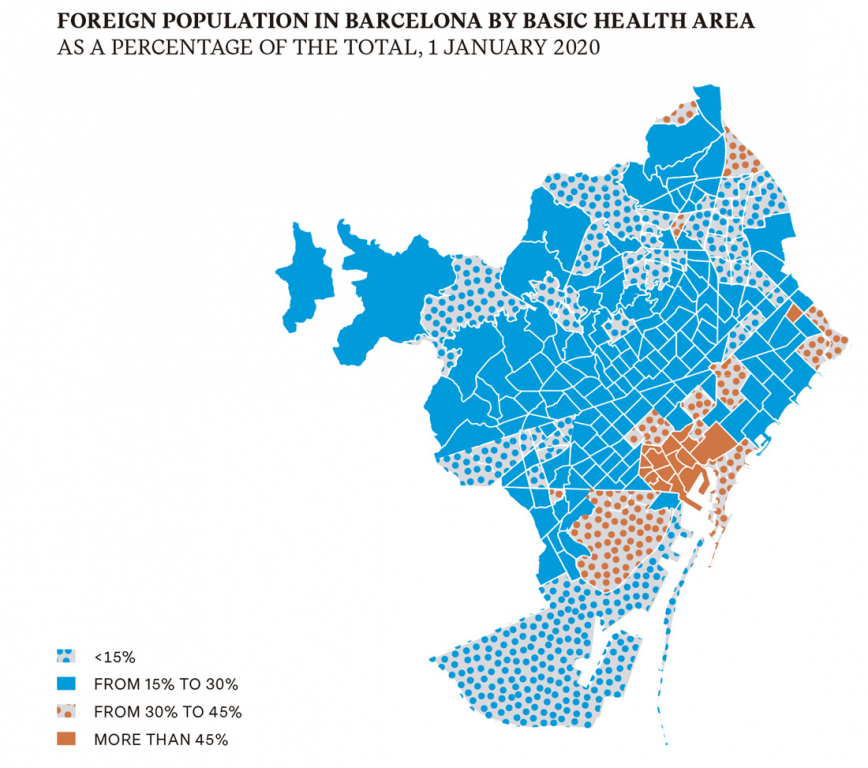 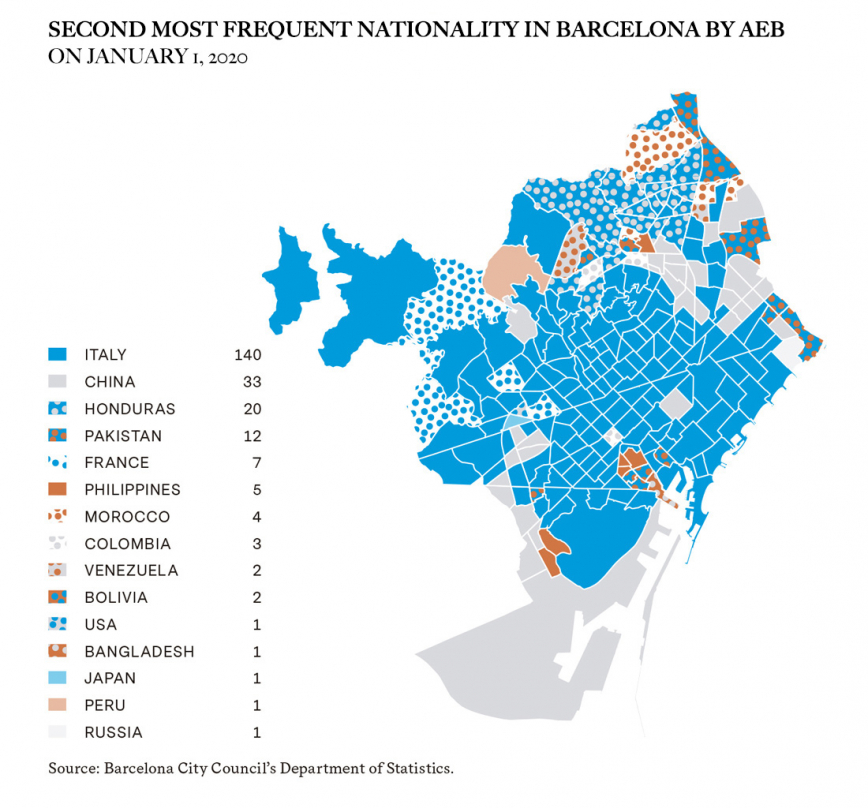 In the city of Barcelona, life expectancy at birth is 83.9 years. If gender is taken into account, however, women live an average of six years longer (86.7) than men (80.7). If, in addition to gender, the neighbourhood of residence is taken into account, the figures vary again and, although they have narrowed in recent years, they still show significant differences. 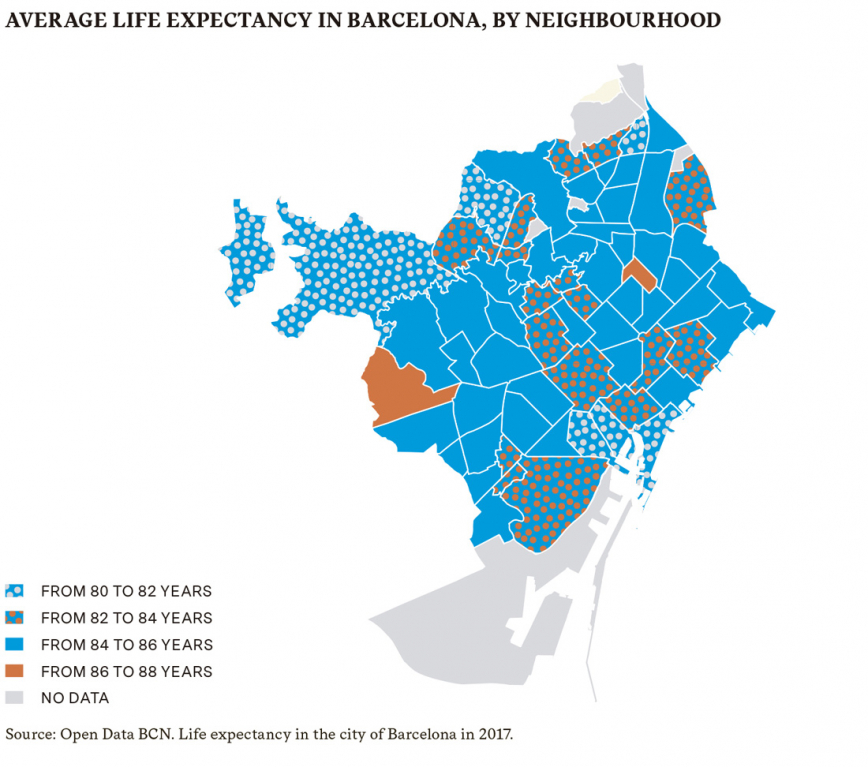 For years the city’s vegetative or natural growth (the difference between the birth rate and mortality rate) has been negative and has shown a downward trend. This means that more inhabitants die than are born. In the last ten years, deaths in Barcelona have remained between 15,000 and 16,000 a year, while the birth rate has plummeted. Whereas early 2010 was marked by 338 more deaths than births, in 2019 the difference was 2,213. 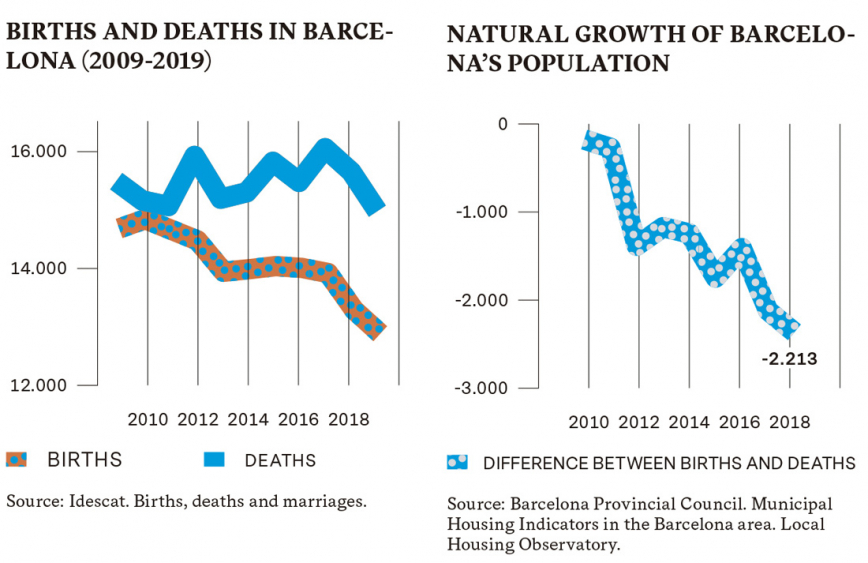 The effect of COVID-19

The pandemic will undoubtedly leave its mark on the people of Barcelona. In 2020 alone, there were 4,217 more deaths than expected, most of them between the months of March and April. On some days of the most critical months, 200 deaths per day above the usual values were recorded.

Homes in Barcelona have an average surface area of 61 to 75 m2 and the most common, according to the 2011 housing census, is for a single person (29%) or a couple with children (25.8%) to live there. Couples without children correspond to 22.4% and single-parent households account for 9.8%. Of these, 3 out of 4 are single mothers. Thirty-six per cent of people living alone are women over 65. Leaving home is a pipe dream for many young people. The figures reveal that 64.5% of the population between the ages of 18 and 24 live with their father and/or mother; in contrast, the percentage drops to 24% among young people aged 25 to 34. However, leaving home does not mean living alone. The main form of cohabitation between young people aged 25 to 34 is in a couple and 22.1% share a flat. 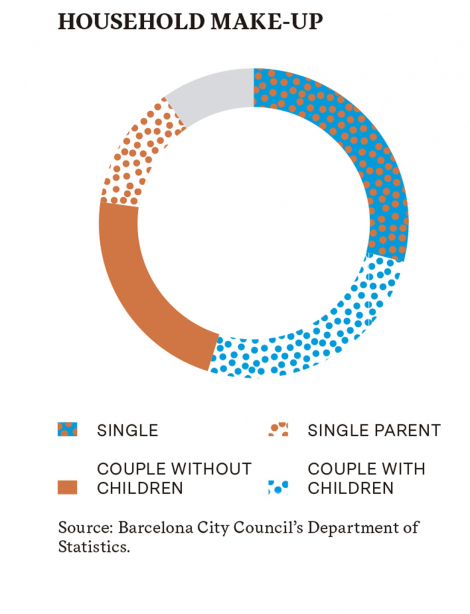 The majority of marriages in Barcelona are civil (85.4%). After the Franco era, the number of marriages dropped and remained stable, but the ratio between Catholic and civil marriages has changed, and now Catholic marriages are in the minority. There has also been a slight fall in divorces and separations since 2007, when it reached one of its all-time highs (5,480). The reform of the 2005 legislation that facilitated break-ups without having to undergo a previous separation increased divorces by 56% between 2005 and 2006. Since then, almost all dissolutions have ended in divorce. With regard to same-sex marriages, the general upward trend and the rise in marriages between women are notable. 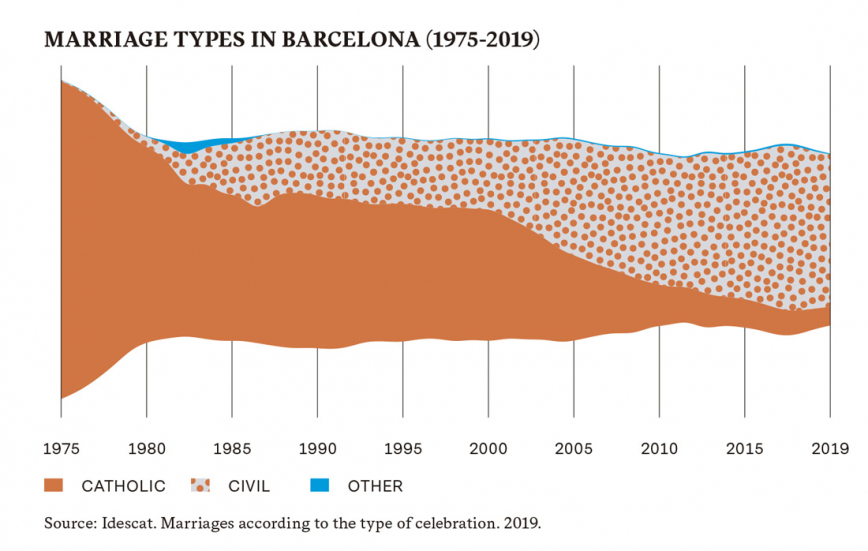 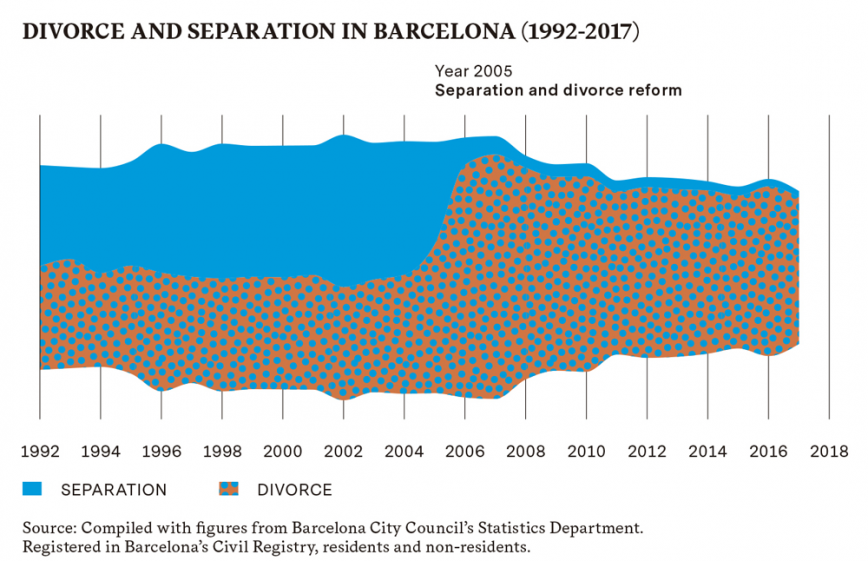 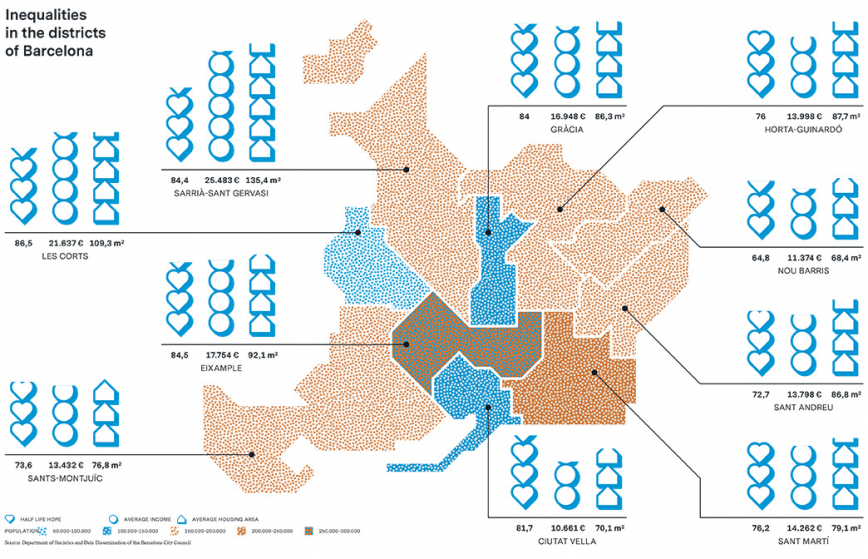