Violence against women, a global and local scourge

One in five women in the world has suffered sexual abuse in childhood and one in three has been the victim of physical or sexual violence. These are the figures quoted in the 2014 World Health Organization report pertaining to these forms of violence.

In Catalonia, the figures are also serious. According to the 2016 Survey on Violence Against Women in Catalonia, more than half of the women in Barcelona have suffered from violence in their lifetime and one in three has been the victim of aggravated assault. In addition, one in six women experienced violence in childhood.

By June 2019, 1,000 women had been killed by their intimate partners or former intimate partners since 2003, when the figure began to be officially recorded. And by 30 September, the total number of women killed had risen to 1,021. Catalonia, with 156 deaths since 2003, is one of the autonomous communities with the lowest prevalence (one per thousand). 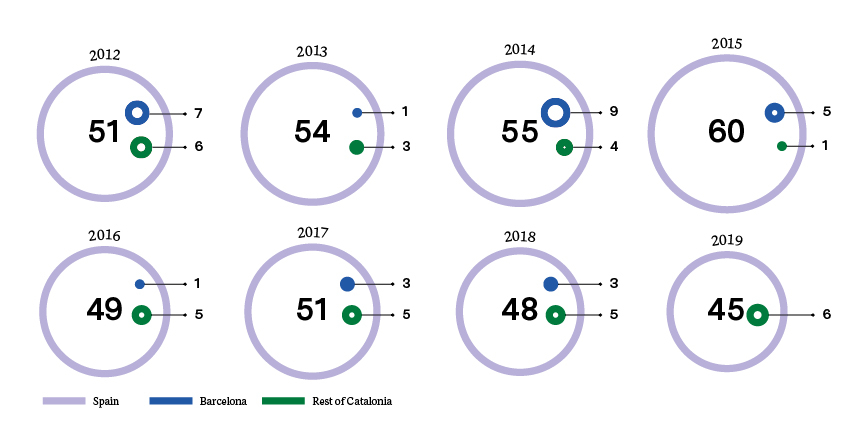 WOMEN KILLED BY AN INTIMATE PARTNER (2012-2019)
*Figures available as of 30 September 2019. Up to that date, no woman in the city of Barcelona had been recorded in the official register, so the figure does not appear in the 2019 chart.
Source: Government Delegation for Gender-Based Violence. Ministry of the Presidency. Department of Statistics at Barcelona City Council.

Violence against women during their lifetime

More than half of the women in Barcelona of any age (from childhood to adulthood) has been the victim of gender-based violence at some point in their lives (57.7%) and one in three has suffered very serious acts of violence (31%), such as rape, violent physical assault, violent touching, threats of retaliation or taking children away without consent.

In 2016, 13.8% of Barcelona’s female residents experienced some form of violence against women (without taking remarks, sexual gestures and exhibitionism into account), while 2.3% of women suffered very serious acts of violence. 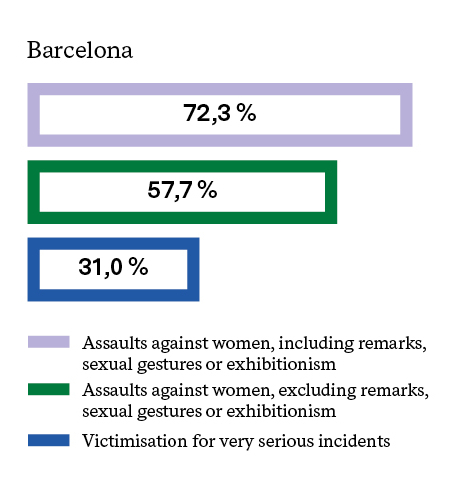 WOMEN WHO HAVE SUFFERED VIOLENCE AT SOME POINT IN THEIR LIFETIME
Source: Survey of Gender-Based Violence in Catalonia. 2016 edition. Noteworthy findings pertaining to Barcelona (2018). 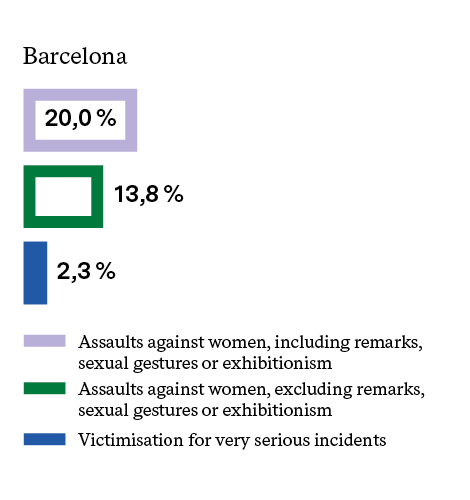 WOMEN WHO HAVE SUFFERED VIOLENCE IN THE LAST YEAR (2016)
Source: Survey of Gender-Based Violence in Catalonia. 2016 edition. Noteworthy findings pertaining to Barcelona (2018).

The profile of a woman suffering gender-based violence

Women aged 16 to 29 are the most stricken. In 2016, victimisation among this age group was more than twice the city’s average (29.4% compared to 13.8% on average in Barcelona). By origin, there is a greater prevalence of gender-based violence among foreign women, followed by those born in Catalonia. By level of education, the prevalence is higher among the most educated women, with higher education, although in 2016 the most victimised were women with compulsory secondary education or basic education. 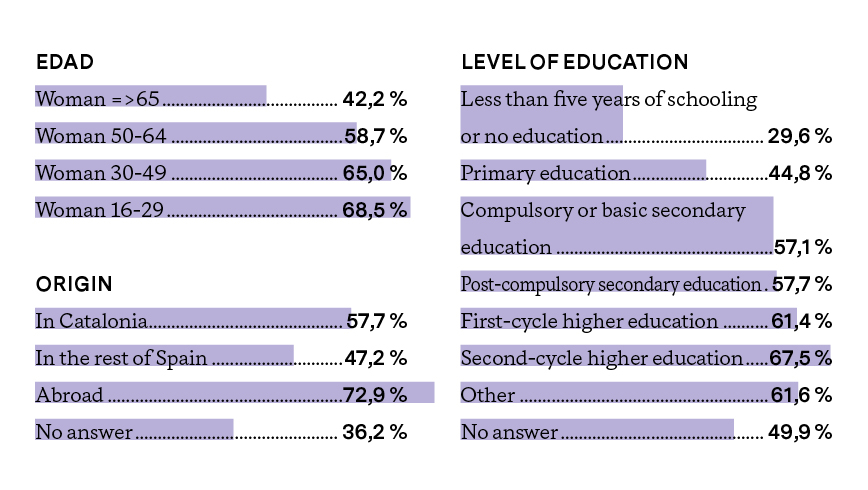 PERCENTAGE OF WOMEN WHO HAVE SUFFERED VIOLENCE AT SOME POINT IN THEIR LIFETIME*
Source: Survey of Gender-Based Violence in Catalonia. 2016 edition. Noteworthy findings pertaining to Barcelona (2018). 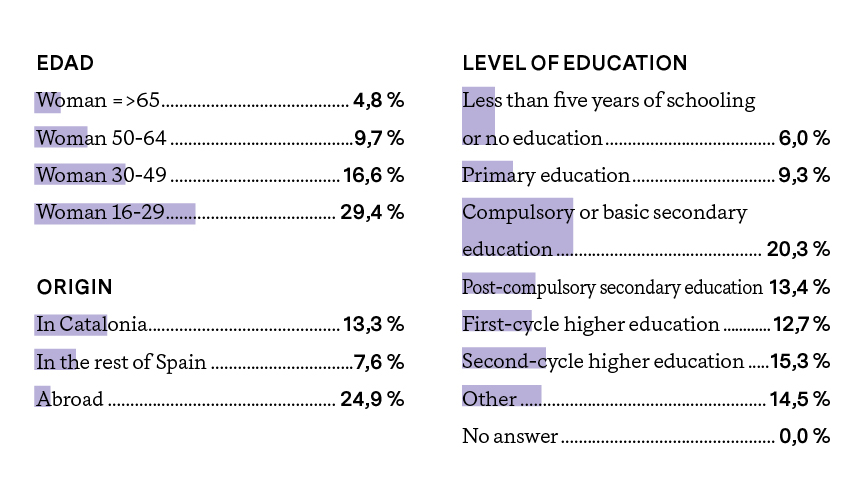 WOMEN WHO HAVE SUFFERED VIOLENCE IN THE LAST YEAR (2016)
Source: Survey of Gender-Based Violence in Catalonia. 2016 edition. Noteworthy
findings pertaining to Barcelona (2018).

Violence perpetrated by former intimate partners has led to the deterioration of the economic situation of the women affected in 43.8% of cases, 21.2% have had to change their place of residence, 20.6% have suffered more isolation and loneliness, 19% improved the security measures in their homes, 16% had to quit their job and 14.6% requested sick leave as a result of violence. 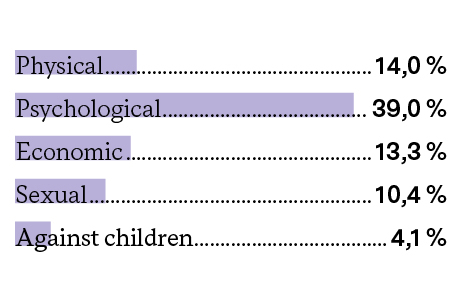 FORMS OF VIOLENCE PERPETRATED BY FORMER INTIMATE PARTNERS FROM AGE 15 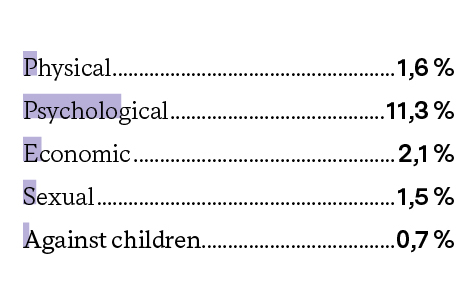 FORMS OF VIOLENCE IN THE CURRENT RELATIONSHIP
Source: Survey of Gender-Based Violence in Catalonia. 2016 edition. Noteworthy findings pertaining to Barcelona (2018).

Violence against women in the social and family environment

More than half of Barcelona female residents (56.8%) has suffered an assault by someone known or unknown to them (excluding intimate partners or former intimate partners and co-workers) at some point in their lifetime. Sexual assaults or harassment mainly occur in public places, and most often take the form of remarks, sexual gestures or exhibitionism (89.1%) and inappropriate touching (41.8%). 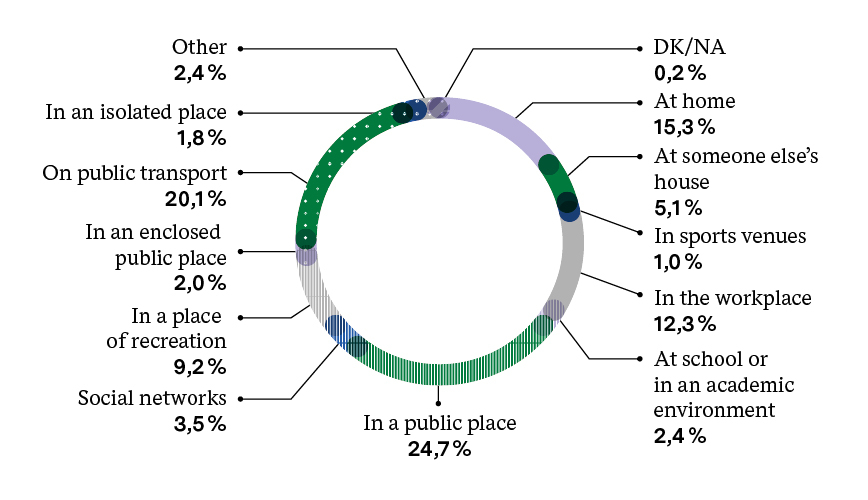 PLACE WHERE HARASSMENT OR AGGRAVATED SEXUAL ASSAULT IS COMMITTED, FROM THE AGE OF 15
Source: Survey of Gender-Based Violence in Catalonia. 2016 edition. Noteworthy findings pertaining to Barcelona (2018). 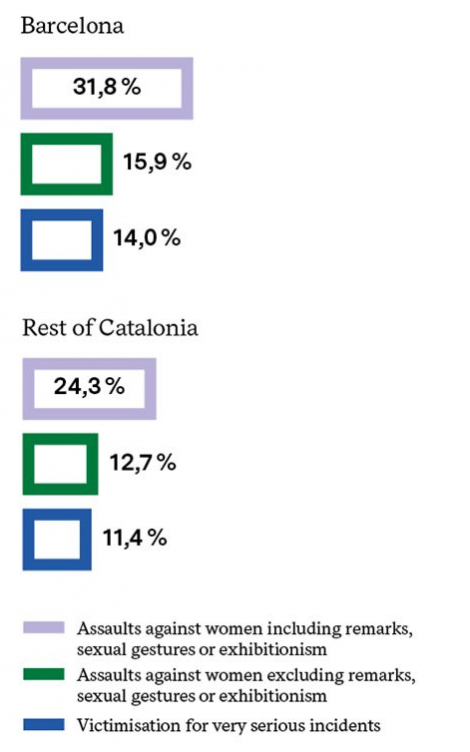 Of the women who suffered violence in childhood, 20.8% were assaulted by someone known to them, and 17.69%, by relatives. The most commonly suffered incidents in childhood are harassment and aggressive remarks (27.2%), followed by pornography and inappropriate touching (9.3%). Physical assaults and rape or attempted rape are 3.8% and 3% of cases, respectively.

The number of gender-based violence reports filed has been growing, according to the General Council of the Judiciary. Among the mortal victims between 2013 and 2019, around one in five women (21% in Spain and 20% in Catalonia and in Barcelona) had filed reports.

One in five women who have suffered former-intimate partner violence (20.2%) claim to have filed reports, while assaults in childhood or in the social and family environment only amount to 4.2% and 4.3% of those stricken, respectively. Minimising the assault or not identifying it as such is the main reason why women claim not to file reports (53.5%). Feelings of guilt or shame (14.2%), fear (13.4%) and the duration or the ins and outs of the reporting procedure (12%) are other reasons for not filing a report.

More than half of the women assaulted by former intimate partners in their lifetime (59.8%) and those affected in the family environment (54.1%) considered the violence suffered to be a criminal offence. In the case of childhood violence, 42.6% did consider it a criminal act, while 22.3% did not recognise it as such at that time but do so today. 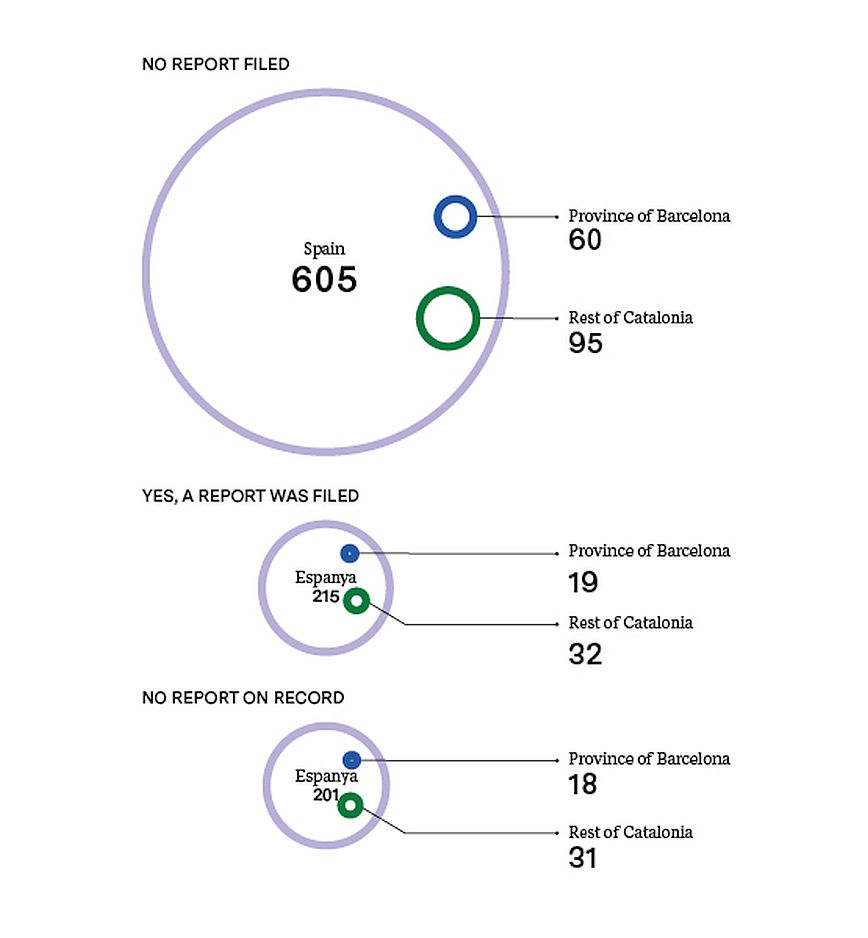 REPORTS FILED BY MORTAL VICTIMS (2003-2019)
Source: Government Delegation for Gender-Based Violence. Ministry of the Presidency. Figures from the General Council of the Judiciary. 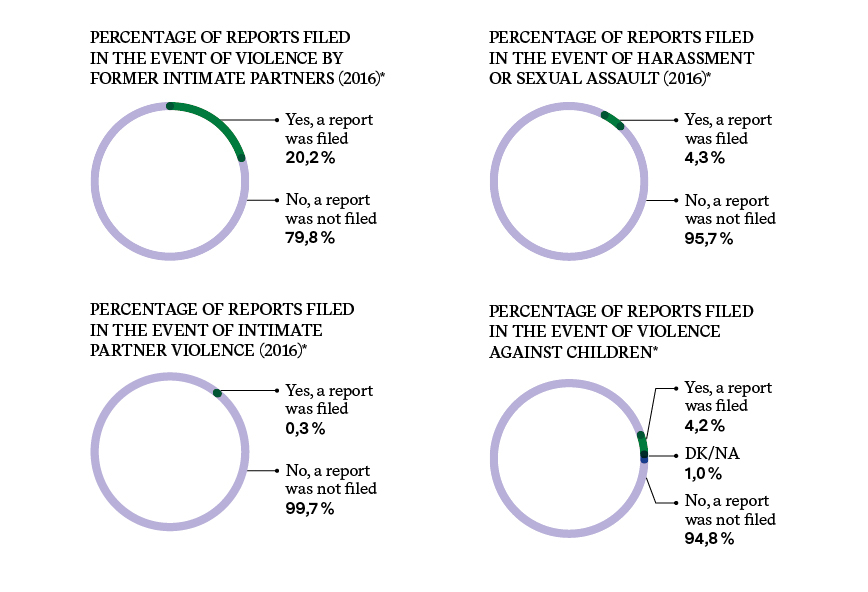