"A scientist is more than just a white cis man". 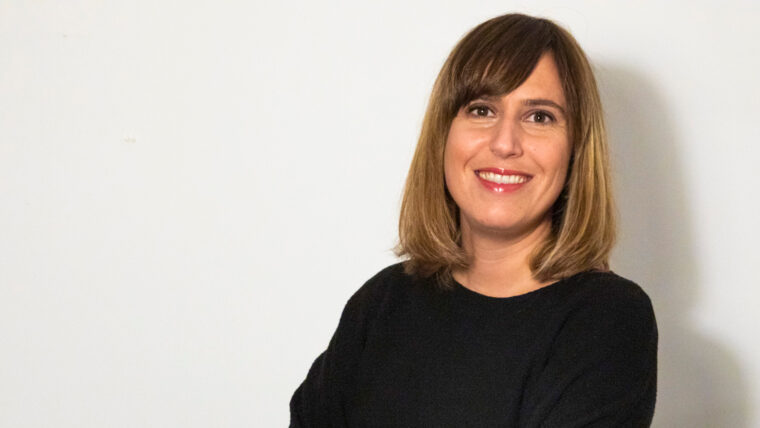 Specialising in science and health, in 2023 journalist Núria Jar will embark with six other women on a mission to the Mars Desert Research Station, in the Utah desert. She will do so aboard the Hypatia I mission, which in addition to its research objectives also aims to contribute to awakening new scientific vocations among girls and young women. We talked to her about this all-female project and gender issues in the scientific field.

You are a journalist. When did you decide to specialise in science?

I am a journalist by vocation, I have always wanted to be a journalist. What was not clear to me was that I would end up working in science and health journalism. Actually, it wasn’t a decision but a coincidence. In 2009-2010 I was offered a job as an editor in a popular science radio programme, Eureka on COM Ràdio. I said yes, not because it was a science programme, but because I am passionate about radio and that was when I came into contact with this world. I was amazed by science and then I decided that I should specialise and that’s when I studied the Master’s degree in Science Communication at the UPF… and I have continued in the profession to date.

Did you have female scientific references when you started in this profession?

At that time, most of the references (if not almost all), as well as most of the guests who came on the radio programme, were men. I think that the feminist awakening, which has also reached the world of science, has been one of the great changes in recent years and now we look for scientific references, because they are there. What has happened is that during these years they have been made invisible, but fortunately they are becoming less so.

Have you never decided to become a scientist?

If you had had the information you have today, would you have decided to study science?

Today, maybe I would have gone into science. I don’t know which one, to be honest. I really like biomedicine, medicine, but I am also a very apprehensive person and in that sense I don’t know if I have the necessary qualities. If I had had the information I have today when I was a teenager, maybe I would have decided to study something related to science because I am a very curious person and science provides answers to many questions, it generates new ones and it is a very creative job. In the end, creativity and curiosity are factors that are also present in journalism and that motivated me to take up this career.

What are the obstacles to women’s vocations in science?

I think one of the biggest obstacles is social stereotypes. There are studies that show how girls, even as young as five or six years old, no longer see themselves and their gender as intelligent as boys. This is very worrying and should challenge us as a society. We must change it because this, which is only the basis, may be putting many obstacles in the way of girls’ and adolescents’ scientific vocations.

Is the scientific field more disadvantaged in terms of equality than others?

I am not sure, but it is true that there are elements that feed this inequality. Too often science is very hierarchical and very masculine. Power carries a lot of weight. I think there are many factors that influence this disadvantage in terms of equality.

A few weeks ago you moderated a debate at the presentation of the study Women and Science in Barcelona. How can journalism contribute to combating the inequalities highlighted in the document?

Journalism has a very important social function, as it can make a significant contribution to changing some of the aspects highlighted in the study Women and Science in Barcelona. Everything that this study reflects is newsworthy and journalism can bring gender grievances in science into the public debate: that the science system is still highly politicised, the issue of pay inequality, the lack of women in technical careers, the glass ceiling… These are all issues that need to be in the social debate. They must be denounced; they must be published in order to contribute to a change towards a more equitable society. The media still have a strong capacity to act as a loudspeaker, so they attack the root of the problem of lack of visibility. If we put the microphone in front of women scientists, just by this act alone we will be fighting against their lack of visibility.

Is there a lack of a gender perspective in the media’s treatment of science?

I think that these problems are reflected and denounced in the media, but it should not take 11 February (Women and Girls in Science Day) or 8 March (Women’s Day) for all this to come out into the public sphere. The debate must be present beyond these days. There may be a lack of gender perspective in the media’s treatment of science, but I also think that more and more efforts are being made to ensure that this is not the case. There is a growing awareness that it lacks a gender perspective and that science is unfortunately biased. An example of this is a wonderful Sense Ficció chapter about gender bias in medicine and how it negatively affects women.

When we talk about gender, we always associate it with equality between women and men. How do you see the situation of the LGTBIQ+ collective in the scientific field?

I really like that question because it is absolutely true. Reality is much more diverse than equality between men and women, so much so that for many people reality is not binary and they feel comfortable neither as men nor as women but with other identities, or with no predefined identity, or with other groups such as LGTBQ+. In addition, there are other ethnicities, other age groups and many other aspects that make up diversity.

What is Hypatia I? Where did the initiative come from?

Our commander, MIT PhD student and astrophysicist Mariona Badenes, had been at the Mars Desert Research Station (MDRS) on another mission. On 11 February last year, she met Carla Conejo, head of science programmes at the Catalunya-La Pedrera Foundation, and explained to her that she had been on this mission and that she would like to set up one with Catalan women of different disciplines and ages who could also live this experience, and from there promote vocations and disseminate aspects related to space, the universe and Mars. Carla encouraged her and both formed this crew, called Hypatia I because we hope that the year after we go there will be a Hypatia II, a Hypatia III, etc.

Why is it important?

Hypatia I offers references of very powerful women who are doing very interesting things in science and who can serve as a mirror for a girl or teenager in order to guide their academic and professional future. It is also relevant because space exploration and Mars are some of the major topics in science journalism and popular science. Therefore, it is necessary to know this topic well and make it present in the social debate, so that everyone can take part in the discussions on issues that affect our relationship with the universe.

Who will participate in the mission?

Hypatia I is a crew of nine women, seven of whom will go to MDRS. The other two are part of the crew as a reserve, in case one of us fails, but they are also working as hard as the rest of us to make this possible. In the crew there are women of all ages and disciplines: from 20 to 40 something, biologists, physicists, mathematicians, astrophysicists… The women were selected by Mariona and Carla, and if there is one thing they always say is that the job was not to find them but to choose them, because female talent really exists, it abounds, although it is often hidden.

It will be as similar as possible to living on a station on Mars. That is to say, we won’t be able to eat what we want, the litres of water will be limited and perhaps we won’t be able to shower every day. T go outside the settlement we will have to put on an astronaut suit and we will have to do it under the orders of our commander. We won’t have access to Internet as if we had it on Earth, and we will have at our disposal tools for research such as a daytime telescope and a night telescope, as well as a greenhouse to grow some kind of food. In other words, our day-to-day life will be as similar as possible to a real expedition to the red planet. One of the crew members is even trained in first aid so that if something happens to any of us, we can avoid breaking the simulation.

What will you be investigating?

The research we will carry out on Hypatia I can be structured into four main themes: astronomy, biology, engineering and communication. There will be, for example, projects on the observation of the universe and Mars, research in biology with zebrafish, batteries that run on urine and that would allow us to be autonomous in terms of energy supply, or the dissemination of all these topics.

In my case, as the only non-scientist by training, I will be a journalist, a crew journalist. At the end of the day, the little internet connection I have is reserved for reporting to the Control Centre on how our day has gone and what we have done. Apart from this more routine task, my idea is to follow the crew members closely and join them, one day with one, one day with the other, and see what they are doing to explain all the interesting projects they will be carrying out.

What actions are you considering to awaken vocations among girls and young women?

Our idea is that this will help to awaken new scientific and technological vocations. We want to show that nine women are capable of forming a crew, collaborating with each other, going to the MDRS in the Utah desert to do research, explaining it, sharing it and making it clear that women scientists exist. This is like a mantra that all of us in the crew are very clear about. We have already taken some actions and we will certainly take many more. For example, we recently took part in the 100tífiques organised by the Catalan Foundation for Research and Innovation (FCRI) and the Barcelona Institute of Science and Technology (BIST).

Would you embark on a real mission to Mars?

Of course I would. It’s a unique opportunity that I wouldn’t waste, as very few people will be able to do it the day you can actually go. Obviously, I would say yes.