“Children are interested in what is exciting and participatory, and science is that”

An interview in depth with Dani Jiménez, physicist and science populariser. 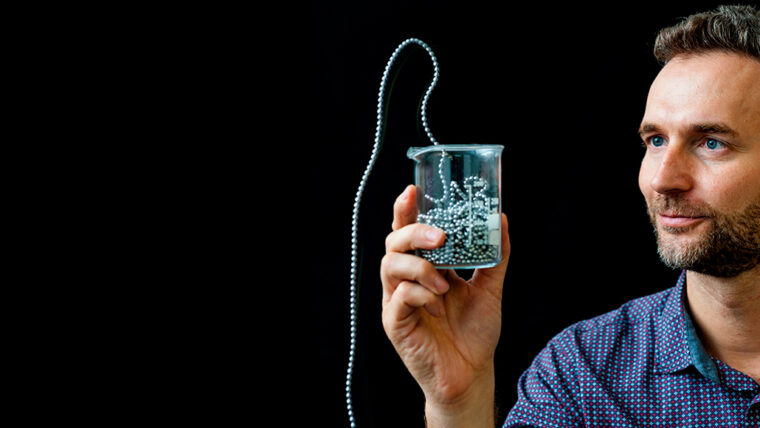 The mediatic and popular Dani Jiménez manages to connect science with his audience thanks to more than a hundred shows and workshops that he carries out every year together with the team of the company CreaCiència, founded by himself more than eighteen years ago.

Coinciding with the celebration of the 15th Science Festival, in which he is a regular participant, we talked to him about popularisation as a key element in the democratisation of science and the awakening of new vocations.

When you were a child, what influencers got you hooked on science?

Long before there were networks or the internet, books and television were our source of inspiration. As a child, Carl Sagan and the Cosmos series, and Isaac Asimov‘s popular science books influenced me enormously. When I grew up, Jorge Wagensberg‘s literary and museographic discourse was a constant inspiration.

You have been passionate about science for years, do you have feedback from people who have embarked on scientific careers thanks to your work?

Many young university students tell me this and it always makes me very happy. But creating vocations has never been one of my main objectives. To democratise science, to break the division between science and literature by moving towards a third culture, to strengthen the critical spirit of society or to increase scientific culture is what has guided me in most of the informative work I do.

Have you detected any differences in interest in science between girls and boys?

No, girls and boys have the same interests. Younger children are interested in everything that is exciting and participatory… and science is that. The challenge in general is to ensure that disciplines and people who are underrepresented in conventional popular science, where physics, chemistry, biology, palaeontology and classical scientists are very prominent, have a greater presence.

You studied physics, at what point did you decide to become a popular science showman?

My friends at uni told me that they already saw me as a showman… The reality is that one thing led to another and that the tools I use on television or in shows always have the function of enhancing the popularisation message.

If the science is spectacular, does it fit better?

More than spectacular, which is difficult to define, I would say exciting. Seeing Saturn’s rings, I don’t know if it’s spectacular, but it’s very exciting. When you act for many people at the same time you have to make it big and spectacular for it to be exciting.

You are an enthusiast of scientific knowledge, what is it about your work that you are most passionate about?

Two things tie together in this question: to keep learning constantly and to receive the excitement from people when you notice that they have connected with something you have told.

Do you think there is a lack of scientific professions in the world?

I don’t know if there is a need for more science professions, but what is certainly needed is to democratise science. To make ordinary people understand that science is part of their lives and that they can also contribute to the research that is being done or should be done. In other words, citizens are not only recipients of the findings made by scientists, but they are also key players in this thing we call science.

And is there a need for more outreach?

There is always a need for more dissemination, because there is always a need for more culture, but I think that disseminators should better align their objectives. Let me explain: every discipline should be evaluated to know if it is useful to society, if we are doing it well or simply what things we can do to improve. Logically, in order to be able to audit our work we need to know what the objectives are, and here we need to do more research.

You have always actively participated in the Science Festival, how do you value a municipal event like this one, which involves the efforts of so many organisations from the scientific world?

There are many good things about the Science Festival. In fact, I am of the opinion that we should have a reduced version and go around the districts once a month. One of the most important assets is the whole spectrum of actors who are disseminating with the public. We find researchers, lovers, professionals, students and eminent people… and this is thanks to the fact that in Catalonia and Barcelona there is already a very strong network of universities, research centres, observatories, associations and companies.

There are many reasons, but I will highlight two:

On the one hand, all the data (type of visitors to museums, profile of the audience of popular science programmes, consumers of scientific books…) indicate that the understanding of science is still elitist. In this sense, there are few events that promote more equality in science education than the Science Festival.

On the other hand, those of us who understand science as an integral activity in society see that for researchers it is essential to disseminate and have direct contact with people. For years now, with initiatives such as science shops and cases such as climate change, the application of GMOs or the treatment of certain diseases, we have been increasingly aiming for the flow of information to be bijective, where science not only influences the public, but also in other ways.

And how have you experienced the 15th edition?

With great happiness. I think we are back to normal…. It has been a total success!

From now on, the Festa takes place in different neighbourhoods of Barcelona and, this year, the new model has been launched in the Raval. What did you think of the experience of changing neighbourhoods?

There are two different ideas in my answer. On the one hand, the Parc de la Ciutadella was part of the Festa de la Ciutadella brand, which in my opinion still needs to be promoted. In this sense, the continuity of the location strengthened that brand. On the other hand, it is indisputable that moving around allows you to reach an audience that had never been to the Festival before. That’s why I’m reviving the idea of having a big festival in the Ciutadella and something itinerant through the neighbourhoods.

What has the public’s response to the new space been like?

Great! It has exceeded my expectations in every way.

You have also participated in other projects promoted by Barcelona Science and Universities, such as Escolab, with a collection of videos showing the research carried out in different centres. What does it mean for students to be able to visit a research laboratory and see their work?

In this sense, Escolab is a brutal project. For most secondary school students, as well as primary school students and citizens in general, the work of those who do science is still very blurred. Escolab provides an unbeatable approach.

One of your projects consists of organising science camps. In a case like this, how do you reconcile science with leisure?

It’s something natural. The more than 1,000 children who have taken part so far fit the profile of most children: they are curious, they like to know and ask questions, experiment and manipulate, and logically, they like to live experiences.

In addition to awakening vocations, the aim of popularisation is also to bring science closer to society and facilitate dialogue. Why is this bridge necessary? Shouldn’t science be a matter for those who are dedicated to it?

As I said, this process of democratising science and involving all citizens is key, but we should not forget that it is not new. Galileo wrote in Italian to make his books accessible to the general public, he built telescopes that he gave and sold to his patrons to gain their favour, he looked at and drew the moon with great elegance to promote the figure of the scientist beyond that of a craftsman. Science and society have always gone hand in hand and every day we have plenty of examples. Currently, energy management in the face of the climate crisis and the energy transition are good examples of this.

How do your shows bring people closer to more everyday aspects of science, such as its methods and processes, the fact that it doesn’t always get the expected results or its connection to real problems in society?

Only 30% of my work belongs to the world of the spectacle in which we effectively show the “achievements” of science. The show is like a dish served to you by a chef in his restaurant: it must be impeccable!

The rest of the time we do everything, and some of the time we also show the inner workings of the researchers. But, to return to the question, before answering it, it is necessary to question the theoretical framework and the objectives we want to achieve. If the objective is to create vocations, perhaps it is necessary to explain in more detail the work of the scientist. On the other hand, if we want to increase the critical spirit of society, then perhaps we need to give a more social and constructivist vision of science. And if we want to increase scientific culture, then we need to take a retrospective look.

When we plan a show, a workshop, a TV programme, a podcast or a workshop, we analyse what our theoretical framework is, what our objectives are and we are faithful.

You have an unconditional children’s audience. How do you manage to connect with the adult public?

We don’t think of any of the products we make as exclusively for children, although we love the fact that children follow us. I like to think that it happens to us a bit like with some Disney films, which have different readings and engage everyone. The other day I saw Ron in error with the children and that’s exactly what happened. For example: in the challenges we have done in the Science Festival, it often happened that the adults accompanied the children and they were more engaged than the little ones.

Each age has its own intellectual maturity and at the same time each person has a different level of knowledge. Achieving multi-layered disclosure is a challenge we try to achieve in every work we do.

What would you recommend to someone who aspires to be like Dani Jiménez?

No one should aspire to be anyone and outreach and the world grows with many different colours and actors.

Over time, has your passion for science not waned?

After twenty-five years of popularising science, I still think that science is very exciting.