"Citizen science can be used to anticipate outbreaks of diseases such as dengue or Zika". 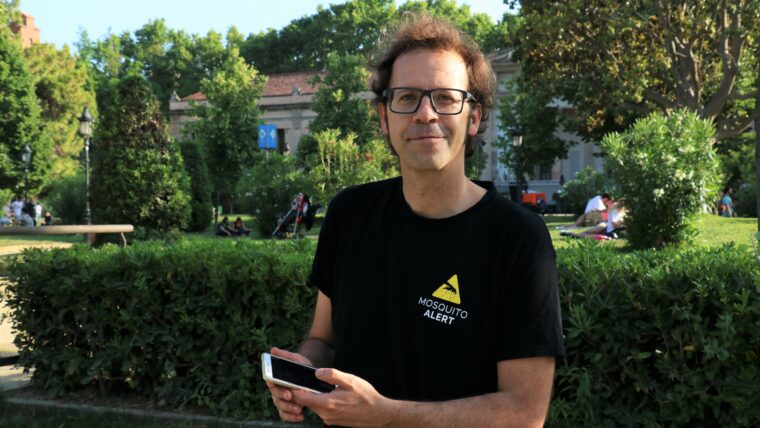 A biologist, he is currently ICREA Research Professor at the Centre for Advanced Studies in Blanes (CEAB-CSIC) and at the Centre for Research in Applied Ecology and Forestry Applications (CREAF). Together with John RB Palmer, professor in the Department of Political and Social Sciences at the UPF, and Aitana Oltra, expert in scientific dissemination and knowledge transfer at the CSIC, they launched the citizen science project Mosquito Alert, a data collection app to monitor the spread of invasive mosquito species, which can act as vectors of certain diseases. We talked to him about this success story, the use of public data with scientific value and the social return of citizen science.

Where did your interest in mosquitoes come from?

In 2010 I landed in Catalonia at the Centre for Advanced Studies in Blanes (CEAB) with a Ramón y Cajal contract, after a series of post-doctoral stays. Once I arrived, I started working with tiger mosquito data to study the key factors in the dispersal and colonisation process in the province of Girona, with data from the Mosquito Control Service of El Baix Ter and Roses. My team then consisted of Aitana Oltra, at that time a research support technician in Geographic Information Systems, and John RB Palmer, a postdoctoral researcher with whom we were working on human mobility issues, using mobile phone data (something quite atypical at the time).

And how did you decide to create an app to track it?

When the economic crisis derived from the real estate bubble took hold, there was a drastic reduction in the resources dedicated to monitoring and managing the populations of this invasive and disease-transmitting mosquito. I simply connected the dots by bringing together elements that until then we had been studying separately. I wondered if a mobile application could be developed to help collect data on the presence of the tiger mosquito in the territory, thus compensating for the standstill of existing surveillance programmes at the time.

That was really the first thought, then we realised that this idea had much more potential. Aitana, John and myself got down to work and have continued to work together on the project until today.

During this time, you have focused on more mosquito species.

Today, the projects are much more mature. The aim is now to generate an early warning and surveillance system for disease-transmitting mosquitoes based on citizen participation, capable of providing quality information in real time and at unprecedented spatial scales.

Why did you decide to involve citizens?

The power in the use of new technologies (Internet, mobile phones) to collect data comes from citizens. Not only that, but it is well known in the field of public health and, in particular, infectious diseases, that citizen understanding and participation are an important part of the solution to the problem. This may sound like a dead letter, but we have the very clear and still recent example of covid-19. The prevention and management of infectious diseases cannot be considered without the involvement of the public.

In 2023 it will be ten years since you launched the first version of the app.

Yes, it will be ten years next year! How time flies.

Since then, in addition to collecting data, what have you been able to learn from non-specialists?

We have learned that citizens, as they participate in the project, generate higher quality information, they learn (which is what we really need) and this is very gratifying to see. We have also learned (and are undertaking more work along these lines) about the motivations and level of knowledge that citizens have about mosquito-borne infectious diseases. Discomfort and fear of possible mosquito-borne infections are important factors, the use of new technologies involves participation in a relatively young section of the population that tends not to have a very deep understanding of mosquito-related public health issues and shared responsibilities for controlling mosquito populations in public and private spaces.

And what have they gained from being involved in Mosquito Alert?

Citizens participating in our project receive information related to public health and vector ecology, mainly mosquitoes, as well as direct feedback from entomology experts who evaluate their reports.

At the city scale we have managed to generate risk maps of tiger mosquito presence using citizen data, calibrated with traditional trapping data and correcting for sampling effort, which in the case of participatory data is very heterogeneous in time and space. In this link, there is a public map of the city of Barcelona where we evaluate this risk on a daily basis and at a scale of twenty metres. The model even allows us to make five-day forecasts based on meteorological data. This map is being evaluated and used by the Barcelona Public Health Agency as another tool for decision-making, as well as being able to use our system to send notifications and communicate with the people of Barcelona.

So, is it a win-win situation?

Yes, the cycle closes: citizens provide us with information, the scientific team passes this data through the filter and scientific methodologies, and the scientific data becomes an added value for everyone, in the form of a risk map that citizens can see and health agencies can use for more effective management. This is the basis of the Mosquito Alert project, to generate and maintain a citizen-scientist-manager cycle, and the idea is to do this at different territorial scales.

In what kind of projects is the data collected through the app used?

In computational eco-epidemiology projects, a branch of epidemiology that covid-19 has greatly promoted and which seeks to make inferences about the risk of disease transmission by integrating many factors (social, ecological) within the framework of a new concept of One Health. It also aims to generate platforms that help decision-making using science and data evidence.

Could the Mosquito Alert model be replicated with other invasive species?

Mosquito Alert is now a successful model of a simple proof of concept, but a difficult factor to demonstrate is that the use of new technologies allows citizens, scientists and managers to come together in the fight against disease vectors, invasive or not. There are other vectors of concern such as ticks or pests affecting agricultural production and forests. Projects have already appeared targeting these species and we are advising others on the basis of our experience. These are projects that do not focus on biodiversity (like the first big citizen science projects), but on locating and learning about problematic species from an environmental and health point of view.

What have you learned about the spread of invasive mosquito species?

Invasive alien mosquito species take advantage of human mobility and connectivity (transport networks) to colonise new territories. This is very clear in the same citizen data and the models we build from it, but we have also conducted genetic studies that demonstrate this. Genetically similar populations can be geographically distant, but be very connected (via the road network and the flow of people across it). This is because we carry tiger mosquitoes from one place to another in our cars.

What about the diseases they can transmit?

Different species of mosquitoes have different abilities to transmit different viruses. Some invasive mosquitoes of the genus Aedes are more or less capable of transmitting viruses such as dengue, Zika, Chikungunya or yellow fever, to varying degrees depending on the species. Some species of the genus Culex, which are common mosquitoes in our region, are, on the other hand, good transmitters of West Nile viruses.

Does the risk of contracting diseases such as dengue or West Nile fever increase in our latitudes?

The occurrence of mosquito-borne infectious diseases in humans is increasing throughout Europe, including the Mediterranean basin. Some diseases are appearing for the first time on the Old Continent, others are diseases that had been successfully eradicated and are making a comeback, hence we speak of emerging and re-emerging diseases.

Therefore, there is a latent risk that seems to be increasing. This is due to a combination of factors, where climate and globalisation play an important role. Predicting when and where is very complicated, but access to data on vector population dynamics beyond what can be done through traditional trapping will certainly be key to monitoring and trying to predict risk areas or epidemiological outbreaks of these diseases.

It is in this sense that the use of new technologies and citizen science can revolutionise our knowledge and capacity to anticipate possible outbreaks of dengue, Zika, etc., but also to establish rapid channels of communication and raise public awareness of the problem.

What is the trend in an increasingly interconnected world where climatic patterns are changing?

These are precisely two key factors in the increase in epidemiological outbreaks of mosquito-borne diseases in recent decades. It is conceivable that some of these diseases are not currently circulating in our country, but arrive accidentally via travellers who have been infected in other parts of the world. Living in a connected world, an epidemiological outbreak of dengue fever in Cuba, such as this year’s, for example, has repercussions throughout the world, and in Europe in particular. In addition, the lengthening of the summer season can be a phenomenon that lengthens the mosquito’s life span and facilitates increased activity.

Thus, many European cities have seen an increase in the number of travellers infected with the disease this summer. Wherever there are mosquitoes capable of biting infected people and continuing to transmit the virus, there is a risk of autochthonous transmission and spread of the disease.

These transformations are global. Will initiatives to which Mosquito Alert contributes, such as the NASA-supported Globe Observer, or iNaturalist, allow better monitoring of these insects on a global scale?

There are a number of participatory science projects that seek to collect information on mosquitoes around the world. Harmonising this data in terms of quality and interoperability, and sharing scientific methods for analysing this type of data is key to improving prevention at the global level, but also predictive capacity at the local level.

We have recently published a paper showing how using joint databases (from different projects at the same time) improves the artificial intelligence algorithms we use to classify the mosquitoes in the images, which in the future will reduce the workload currently carried by experts and citizens who help us classify these images.

Can an invasive mosquito species be eradicated?

It is very difficult to eradicate an invasive mosquito if it is not found in the early stages of colonisation and if action is not taken quickly. Invasive mosquitoes have some biological characteristics that make them particularly difficult to eliminate. They are opportunistic species, robust to environmental disturbances and highly adaptable to diverse environments, particularly environments where the human footprint is significant. Some of these species were resident in Europe for hundreds of years and disappeared without knowing the causes, and could now re-colonise the continent.

Given this scenario, what can we do to protect ourselves?

On the other hand, the use of repellents, although never 100% effective, reduces the potential of being bitten, which is when mosquitoes can transmit the disease.

Finally, collaborating with public health agencies and projects such as Mosquito Alert to provide information related to the presence of mosquitoes are things that people can also do and are very useful.