"There are many examples in which artistic creation anticipates science"

Interview in depth with Andrés Burbano, artist and researcher. 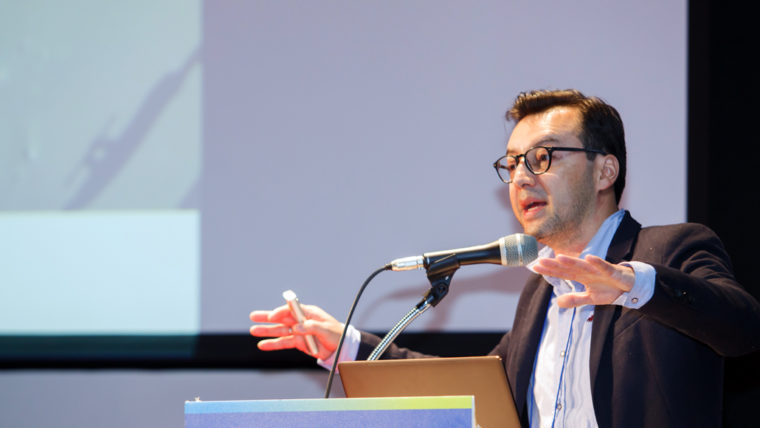 Native of Colombia, he is currently an associate professor in the Department of Design at the Universidad de los Andes in Bogotá, but next September he will begin a new teaching post in the Faculty of Arts and Humanities at the Open University of Catalonia, the UOC.

For years, he has been exploring the intersections between art and science, and last June he was in Barcelona to chair the thematic axis Human and non-human at the 27th International Symposium on Electronic Art (ISEA 2022). After the event, we spoke with him about the common ground between art, science and technology.

How did you experience the ISEA 2022 symposium?

ISEA2022 was an enriching and intense experience. I was particularly struck by the articulation of the city and the region, the intersection between the UOC and centres such as the CCCB, the quality of the curatorship of the exhibitions, the thematic axes proposed, the relationship between these themes and the keynotes. Personally, for me, it’s a unique opportunity to be able to see in person friends and colleagues who contribute to the community and with whom we haven’t seen each other in person for a couple of years for obvious reasons.

What hot topics at the intersection of art, science and technology were addressed?

It seems to me that all the themes of the academic tracks are relevant: “possibles” asks about the multiple facets of the future; “human and non-human” asks about artificial intelligence; “nature and worlds” asks about environmental issues; “futures and heritage” asks about history and technology; and “education and societies” addresses the pedagogical challenge we live in the present.

How do you see Barcelona in relation to other countries in this field?

There are some very powerful things happening in Barcelona. This was a generous ISEA, with three exhibitions in Barcelona and others in nearby cities, several projects were financed by the organisation, which contributes to cementing the quality of the proposals. It seems to me that the academic level was remarkable (Susanna Tesconi). It is evident that there is an interest here on the part of multiple educational, cultural and academic institutions. In addition, there is an important local production with a remarkable quality and visibility. One of the initiatives that has caught my attention is the Hub of art, science and technology, for example. But there are many others, such as the Artnodes magazine (Pau Alsina), the Arts at CERN project (Mónica Bello) or the NTF and art exhibition that was open at the same time as the ISEA (Pau Waelder), to mention just a few.

Art has always been subject to technique or technology, but what does art have to do with science?

The question of the relationship between art and science opens up a wide range of answers. As a starting point, one can say that scientific practice has an aesthetic dimension and that art has an investigative component. However, this is not necessarily clarifying. In my particular approach, I have been shifting the focus to the value of dialogue, to the value of conversation and debate of scientists and artists, emphasising the role of the people who make art and science, and it is there that in many cases we find the most inspiring transactions. I guess I would ask of what can be built in common between artists and scientists?

What are the commonalities between art and science?

The points can be traced to some deeply human characteristics such as curiosity, wonder, the ability to ask questions about the world, to engage in the adventure of posing answers and, of course, there is the role that creativity plays in both practices. Most interesting, however, are the particular questions about specific topics that arise in specific collaborations between scientists, technicians, artists and designers.

Do you separate your work as an artist and as a researcher? And if so, how does one influence the other?

In principle and in a simple way, I could say that I understand the role of artist and the role of researcher as practices that have distinctions between them. If they were the same, we wouldn’t need two different words to talk about them. What is true is that, given my training and my interests, I have made an effort to cultivate both, and I have taken on the task of demonstrating this through my production. Thus, I have carried out artistic work in collaboration with scientists (for example, archaeologists) and I do research on the history of the media where I incorporate elements of artistic creation as part of the research method. That’s my path, and I’ve met some very valuable people who also inhabit that place of transit, but I don’t think everyone should do the same.

What answers do you seek with your research?

Let’s say that the answers are specific to the framework of each project. On the one hand, I am interested in the possibilities of digital technologies to capture and represent three-dimensional spaces, and how this can be useful for people interested in archaeology, volcanology, or geology. At the same time, I wonder how the same digital material can be used to develop immersive installations, for example. In other cases, when I do research on the history of media in Latin America and the Global South, I have tried to make reconstructions of the technologies studied and then, with those models, make creative and critical projects.

From an artistic perspective, what themes or processes interest you most?

I am interested in making visible the elements of meaning that underlie the technologies and in some cases the scientific context in which they are developed. This general interest is concretely articulated in collaboration with scientists such as Karen Holmberg, a volcanologist and archaeologist at NYU with whom we did fieldwork on cave paintings in Chilean Patagonia. More recently I have worked with Giovanna Danies, a biologist dedicated to issues of biodesign and synthetic biology, to produce an installation that questions the representation of nature in the 19th century in what is now Colombia.

Can you give an example of how you incorporate scientific and technological knowledge into your creative process?

As I mentioned earlier, I am working on a project with filamentous fungi and their decomposition to take energy from the cellulose in paper. In this case, for example, it was essential to understand the dynamics of the life cycle of these living beings. To do so, I worked hand in hand with the biologist Giovanna Danies from the Universidad de los Andes in Bogotá, Colombia, an expert in fungi. She has been working on the implementation of a fungal strain in conjunction with several other professors of biology and synthetic biology, looking for applications to biodesign. In this case, my work would not be possible without the interaction with this group of scientists. Fortunately, they are very open to experimentation and new projects.

How would you describe the art of the 21st century?

I don’t think there is a singular 21st century art, rather I think that because of the contingencies we are going through at the moment, a lot of the creative and critical efforts are focused on understanding how science and technology reconfigure society and how society shapes science and technology. In this cycle, art is a privileged place to establish enriching dialogues and debates.

How can scientific research be helped by art?

It seems to me that this question should be answered by a scientist. However, with the experience I have, I can say that in some cases scientists can benefit from the way artists and designers think, or from their methodologies. For example, in one particular project, The New Dunites, a dataset that was produced as part of an art project ended up being used by a professional archaeological working group. However, there are other projects where communication becomes difficult, leading to dead ends where projects do not necessarily come to fruition. In any case, the dialogues and debates in the two contexts prove to be enriching in two ways.

There are many examples in which artistic creation anticipates science, hence a whole genre of literature and film originally called “science fiction”. Of course, in the present day there is a much wider variety of relations between art and science that show how the use of technical means, specific to each epoch, are manifested through art. A very clear example of this are the cyanotypes that Anna Atkins made in England in the 19th century, where she represented visual contents of biological origin, particularly of algae. The interesting thing about this example is that the articulation of all the elements is very organic, in addition to the fact that the photographs, or cyanotypes to be exact, are of an impressive visual richness.

Does art speculate on futures that are not yet possible, or does it orient new lines of research? Do forms of expression such as dance, painting or digital art have or have they had a similar effect to that of science fiction?

Yes, without a doubt, and this is becoming more and more systematised. An example in the field of dance is the work of choreographer Wayne McGregor, who has trained a neural network with a vast audiovisual archive of dance, which has been processed, making contributions both to possible new choreographies and to a more complete representation of the human body at a computational level.

How does society benefit from the intersections of art, science and technology?

Society benefits in a clear way, given that debates and problems are made visible where there don’t seem to be any, the idea of the interconnectedness of knowledge and the importance of creativity and criticism in any state of development of society is strengthened.

In the future, will art be digital?

There has already been a branch of art that is digital for several decades, but I don’t think that digital art will replace art that is not digital, rather it is a phenomenon of coexistence. In this sense, the most important thing from my point of view is that the boundaries between the digital and the analogue are going to be increasingly difficult to determine, and we are entering a mixed reality of unprecedented characteristics of which we don’t know much, which is under construction and in which art will be very necessary.

We can mention a number of artistic projects that work with virtual reality, but with the advent of the large-scale popularisation of such platforms as the Metaverse, we are confronted with the understanding that virtuality is present in many aspects of how our brain and nervous system construct an image of the world from a series of stimuli from outside. Vilém Flusser spoke of virtualities, some technical and some natural so to speak.

Will there come a day when artificial intelligence will take over from human art?

This is a speculative domain, we cannot say for sure what will happen. What would be ideal, however, is for art to play an important role in the implementation of artificial intelligence in society, to contribute to making sense of it, to question it and to explore its aesthetic and ethical dimensions.

You will soon be starting a new adventure in Barcelona, as a lecturer at the UOC. What do you expect from this stage?

First of all, I hope to learn from the team I’m going to work with, to learn about the local artistic and cultural culture, to learn Catalan and to be aware of where I can make a contribution because that’s the idea: to contribute.