Schedule, prices and tickets in the link of each activity. 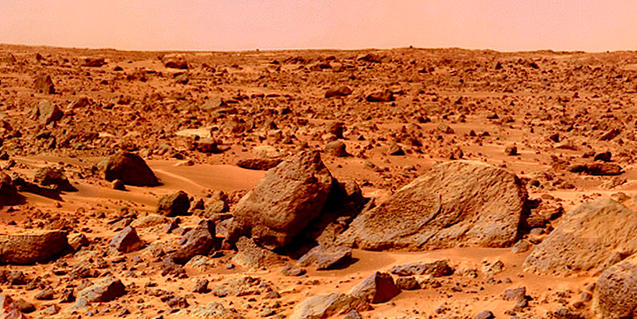 The CCCB programs various activities about the red planet, astronomy and space exploration.

It is April, spring in the Northern Hemisphere and autumn in the Southern one. It will be 365 days until, aboard our planet, we trace a complete orbit around the Sun and it will be April again, but outside Earth, talking about months, seasons and days has another meaning. On Mars, for instance, the day is a little longer than at home, 24 hours and 40 minutes, and the year is almost twice as long, 668 Earth days. In addition, the Martian orbit is eccentric, so its seasons have different durations. All these features of the planet can be seen until July 11 in the exhibition Mars: the red mirror, at the Center of Contemporary Culture of Barcelona, and now, during April, you can expand your knowledge of astronomy with the parallel activities organized by the center.

Due to the exhibition and the recent arrival of the Perseverance robot to Mars, the planet is the protagonist of a lot of activities and media. The magazine El Món d'Ahir, with a monograph on this topic, is an example. Three of its writers, the poet Míriam Cano, the artist Joan Fontcuberta and the physicist Toni Pou, will meet on Friday, April 9, in the conversation A Swarm of Worlds to talk about the fascination and imagination that the exploration of the universe awakens in us. Toni Soler will moderate the event. In another conversation, on Monday, April 12, philosophers Markus Gabriel and Miquel Seguró will talk about A New Global Ethics. The session starts from the fact that we are imagining the colonization of Mars when we have not yet learned to live on Earth nor how to face major planetary crises derived from today's political and social systems. In this context, the speakers will discuss the role of philosophy in the face of these crises.

Life on Earth and Mars will also be the subject of another conversation, this time of a more scientific nature. Several space missions aim to find evidence of past life on the red planet that confirms the assumptions of science. On Tuesday, April 13, geologist and geochemist Ignasi Casanovas and chemist and meteorite expert Jordi Llorca will analyze, in the session Are we Martians?, the similarities between these assumptions and the origin of life on Earth. But the activities about Mars and the cosmos are not only talks; there is also room for other languages such as corporal expression. On Saturday, April 10, you can check it out with Big Bounce, a show and a family dance workshop by the company Big Bouncers where participants can experiment with movement and connect with the Big Bang, that is, the origin of the universe, space and time from a huge explosion produced about 13,700 million years ago.