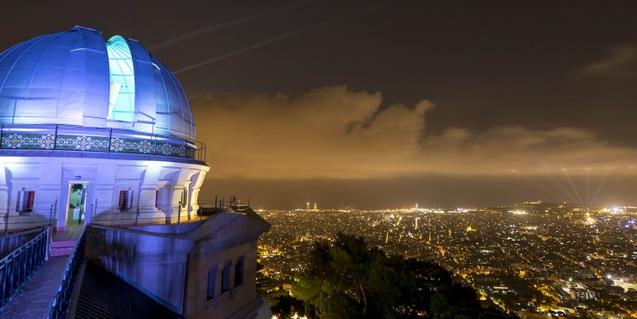 Astronomy and gastronomy go hand in hand at the Fabra Observatory's dinners with stars.

Placed in Collserola, very close to the peak of Tibidabo, at 411 meters above sea level is the Fabra Observatory, the astronomical equipment of Barcelona founded in 1904. This modernist building, designed by architect Josep Domènech i Estapà, belongs to the Royal Academy of Sciences and Arts of Barcelona and is home to the fourth-oldest active observatory in the world. Among the four types of visits offered by the Observatory throughout the year are daytime, nighttime, those organized for groups and schools and, finally, Dinners with stars. This last activity, exclusive to the warmer months, can be enjoyed from Tuesday to Sunday evenings from June 4 to October 4 and includes dinner, lecture and astronomical observation.

The astronomical research carried out from the Fabra Observatory, beyond giving the official time of Barcelona, is based on the observation of double stars, the monitoring of asteroids and comets and also the compilation of meteorological and seismic data in an uninterrupted and systematic way thanks to its long trajectory. In addition, its first director, Josep Comas i Solà, wanted this facility to play a leading role in the dissemination of astronomy. That is why activities are organized with direct observations of objects in the near and deep sky, depending on the time of year. These observations using the original refracting telescope of 1904 are memorable experiences for the visitors.

The Dinners with stars offer the possibility of enjoying a meal in the open air with spectacular views of the city at night. Each dinner is accompanied by a scientific talk given by Joan Antón Català, Enric Herrero or an occasional guest scientist, and an astronomical observation (weather permitting) through the historic original 1904 refracting telescope that rounds off the activity. Throughout this edition it will be possible to contemplate the Moon, Mars, Saturn, Jupiter, the double star Albireo and the triple system 24 Coma. For all these reasons, the Dinners with stars are a memorable astronomical and gastronomic evening.

Check all the information on the website of the activity.