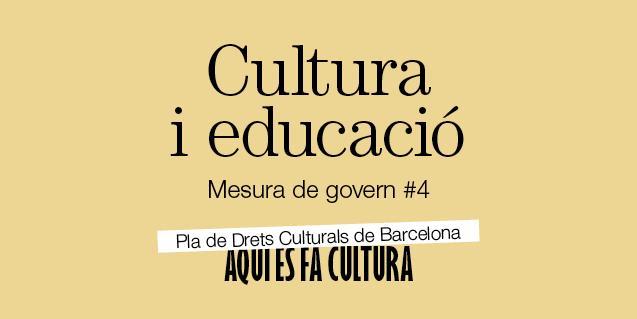 The network of music schools expands with a new centre in Sant Martí.

To advance in the development of a transversal public policy in the cultural and educational spheres, reduce inequalities in the right to participate in the cultural life of the city and guarantee equal opportunities in access to quality education throughout life, the measure Culture and education: the right to cultural participation and lifelong artistic education and practice, which is part of the Cultural Rights Plan, foresees different actions. Among them, the "Caixa d'eines" project will implement over this academic year a range of extracurricular activities for 2,300 pupils at 51 schools in the districts of Bon Pastor, Baró de Viver and Trinitat Vella, Besòs and Maresme, Trinitat Nova, Roquetes, Verdum, Turó de la Peira, Prosperitat, Ciutat Meridiana, Torre Baró, Vallbona, Raval and Gòtic, Poble-sec and El Carmel.

"Caixa d'eines" is promoted by the Pla de Barris and the Consorci d'Educació de Barcelona and introduces artistic practice into the school curriculum in order to reduce cultural inequalities between neighbourhoods. This year, of the 51 schools, 31 are primary schools, 10 secondary schools, 9 secondary schools, and 1 specialised education centre. This deployment also involves 62 facilities, entities and creators from 6 districts of the city and 18 neighbourhoods.

The programme started during the 2017-2018 academic year in a first phase focused on the activity during school hours. In this first period, it reached 30 educational centres, involved 20 entities and around 3,000 children and young people in the city. It has now begun a second stage that also deploys a new methodology: it incorporates an artistic and mediation profile into the different educational centres, whose main objective is not direct activity in the classroom but rather the training of the teaching staff, accompanying the teaching staff to incorporate artistic practice and relate it to the competencies and educational project of the centre. The consolidation of "Caixa d'eines" contributes to forging a transformation of schools, a change of paradigm, in which educational centres also tend to become cultural references in their territories.

One of the other actions envisaged in the measure of Culture and education: the right to cultural participation and lifelong artistic education and practice is the setting up of the sixth municipal music school in the Sant Martí district. This expansion of the Music and Arts Schools Network, which is managed through the Institut Municipal d’Educació de Barcelona (IMEB), will take place over the next two academic years, with a planned investment of 9 million euros. The new facility, which will be located in the former Pere Calafell building in the Sant Martí de Provençals neighbourhood, expands a map of municipal music education centres that currently also includes schools in the districts of Horta-Guinardó, Sarrià-Sant Gervasi, Eixample, Nou Barris and Sant Andreu.

The conception of culture and education as inseparable is a central element of municipal policies. A clear example of this is the numerous programmes designed from a cross-cutting perspective that are carried out in both educational and cultural centres. Veteran programmes such as  EN RESiDÈNCiA, which this year has begun its 14th edition, or novelties such as Escena Pilot, launched in the 2020-2021 academic year and which consists of the staging of a theatrical show of collective creation among students from different public high schools in the city.

In the same line of accompanying and stimulating the practice of music, in the coming months, a new programme of aid for families will be launched, which will complement the system of grants, discounts and bonuses for pupils from the most needed families that are already in operation in both municipal and private music schools.