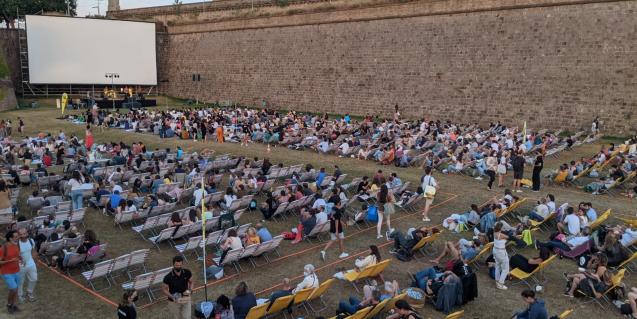 The best movies of all time and their previous concerts will help you fight the hotter nights of this summer.

A concert by The Sey Sisters, a soul and pop band infused with African sounds formed by a trio of sisters of Ghanaian descent, and the screening of the film Pulp Fiction will open Cinema a la fresca sota el cel in Barcelona on 1 July.

There will be a total of 16 open-air film sessions combining different genres such as drama, musicals and science fiction, both classic and more contemporary, but with the seal of quality as their common denominator. Among the titles selected for the hot summer nights at the Fossat de Santa Eulàlia in the Castell de Montjuïc are Belfast, a drama set in the tumultuous Northern Ireland of the late 1960s, directed by and starring Kenneth Branagh; West Side Story, in which Steven Spielberg reverses Robert Wise's 1960 classic of the same name; and Licorice Pizza, a story in which director Paul Thomas Anderson introduces us to Alana Kane and Gary Valentine, two young people who fall in love in the San Fernando Valley in 1973.

Catalan cinema will also be represented by one of the hits of the year: Alcarràs, by Clara Simón, which will be screened on Monday, 11 July. It is the story of a family from a village in Lleida who work the land and live (or survive) mainly on what they make from the sale of their peaches. Its director won the Golden Bear at the Berlin International Film Festival, and this intimate film has been one of the biggest box office hits this season.

Each of the screened films will be accompanied by a concert beforehand, at 8:45 p.m., with bands such as Los Stompers, who will offer us the best of Irish folk music; Los Carosones, a group that pays tribute to Renato Carosone, one of the most important Italian singers of the so-called Neapolitan song; or LaKolmena Bcn (percussion), led by two Latin musicians who offer a wide variety of themes and genres, making for a dynamic and festive show.

El cinema en les nits d'estiu is already a classic in the city. Little did its promoters imagine, 20 years ago, that such a project would be so popular. It is a cultural activity that many look forward to every season. And to top it all off, on Friday, 5 August, there will be a surprise film screening, a closely-kept secret, although if we have an eye on their social media, they will be offering us clues on what the title might be.