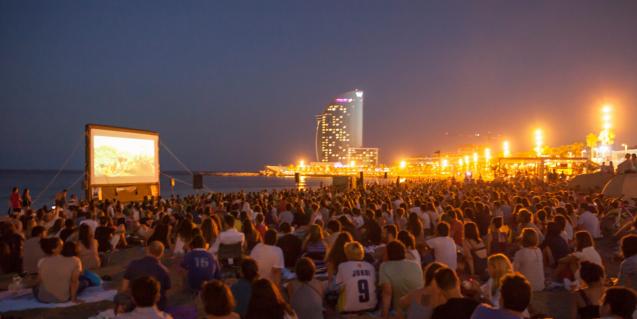 When the sun goes down, films take centre stage on the beach in Sant Sebastià.

Cinema Lliure a la Platja is celebrating its 11th anniversary. The initiative, which began in Barcelona, has been consolidated and is now available in other areas of Catalonia and the Balearic Islands. After the pandemic, which forced the event to be moved to CEM La Mar Bella for the past two summers, it is returning to its original location – the popular beach of Sant Sebastià in Barceloneta.

The opening film is La vida era esto (Thursday, 7 July); Sis dies corrents (14 July); Damas de hierro (21 July); Les vides de Marona (family title) on 28 July; and Sin señas particulares (4 August). The closing ceremony will take place on Thursday, 11 August, and the film, on this occasion, will be decided by the public from among several proposals. To participate, keep an eye on @cinemalliure's Instagram. The screenings will be in O.V. with subtitles.

The films we will see in this open-air cinema have been screened at many festivals and won several awards. With a programme aimed at a diverse audience, the summer evenings will include films for the whole family, and some sessions will include debates and colloquiums.

The organisation has reached an agreement with the FILMETS Badalona Film Festival to broadcast short films before the movies. In addition, the organisation will also give film school students the opportunity to exhibit short works that have emerged thanks to its New Talent call for entries.

The titles will be screened after dark to ensure good visibility of the screen, which means the times will vary according to the date. The organisation recommends using bicycles or public transport to get around as part of its commitment to sustainability. Access is free of charge, and no reservation is needed.