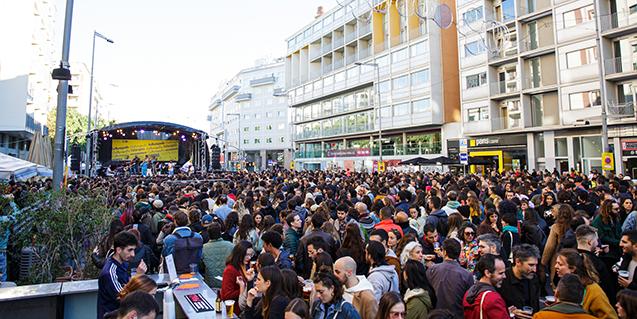 CULTUROPOLIS closes its first edition with a successful attendance and a fourth day with a party full of participation and spectacle in Paral·lel.

The calm of an early Saturday morning was shaken up on Avinguda del Paral·lel by the sound tests of a stage that gave the neighbourhood a foretaste of a morning full of music, entertainment, games, dance, and culture in general. Fifty metres up the street, a play area and an open dance floor began to be set up, and in front of El Molino, a television set began broadcasting interviews with representatives of culture and Poble-sec organisations, among others. The last day of CULTUROPOLIS began to wake up.

Suddenly, a 1970s Seat 127 burst into the Plaça de la Bella Dorita, making its way through the audience of the television programme. From it, four performers disembarked to explain, loudly, that they had come from the future to keep the culture of the neighbourhood alive, since in their time it is in poor shape: "there is no life, everyone is hooked to their mobile phones, no one touches themselves". As if they were the Pied Piper of Hamelin, they seduced everyone around them to join them for a stroll through the neighbourhood.

Along the route, they met various groups who joined the group and the comparsa became a real cultural parade: a candyfloss peddler, a batucada, a second batucada, this one with the addition of wind instruments... and the samba took over Nou de la Rambla. It's official: the street party for cultural rights has awakened.

The Paral·lel neighbourhood and other parts of the city joined the procession, which continued to grow: two large loudspeakers on tricycles added techno, dance and electronica to the show, and an ensemble of musketeers put on a dance show at the gates of Sant Pau del Camp. The parade opened the doors of the festival and was also a showcase for the cultural activity of Poble-sec through the neighbourhood organisations that took part and which, in turn, commemorated the tenth anniversary of the Albareda Cultural Centre.

Meanwhile, in the play space El Pati Reciclat, a lot of children and their families have been hooked on a collection of games made with objects and materials that have been given a second life to save them from the dump: human-powered vehicles, three-dimensional puzzles, aiming games, games of skill and games that have not yet been invented, and that the children have created with the materials that the space has made available to them. This is because sustainability and games are also culture, and we have the right to participate in it with creativity, ingenuity and experimentation, something that these four days of CULTUROPOLIS have made very clear. Alongside this Pati, the dance company Los Informalls was active and got everyone who passed in front of the open stage to move their skeletons to the rhythm of rap, hip-hop, merengue, reggaeton and many other sounds.

The dance floor of the street party ended up mobilising the masses on the stage for the main event of the party: the live broadcast of the Barcelona Community Radio Network, with Marc Giró as guest presenter. The event shared with the public the music and dance of Flamenco Queer, the illustrations of Flavita Banana, the voice of Gloria Ribera, a lot of humour and numerous demands in favour of cultural rights. Specifically, an Auca of cultural rights has been presented, made up of eight points that were listed, explained and exemplified through the performing arts: interculturality and diversity, the Catalan language, the feminist perspective, transparency and good governance, transversality, decentralisation, metropolitan culture and sustainability. The show made the audience vibrate with the music and aroused their laughter, but also made them reflect with questions about the recognition between cultures, the dignity of the profession of artist, and feminism. A session that summarised all the themes addressed in this CULTUROPOLIS, and put them into practice with artistic examples.

The festival included more street activities, such as a guided tour around the key places of Paral.lel's flamenco roots, explained through history and research, and a participative workshop to explore the link between dance and books. In addition, the last sessions of the academic congress were held in the Paral·lel 62 hall. Two concerts filled the stretch of street between El Molino and Paral·lel 62 with music and audience: the Rumba All Stars, formed by Carabutsí with musicians representing Catalan rumba from the Raval, Hostafrancs and Gràcia, and the mix of Latin, Afro-Cuban and electronic styles of La Sra Tomasa. A participatory, popular and festive culmination where citizens were able to put into practice the exercise of the cultural rights that have been the focus of this successful first edition of CULTUROPOLIS.