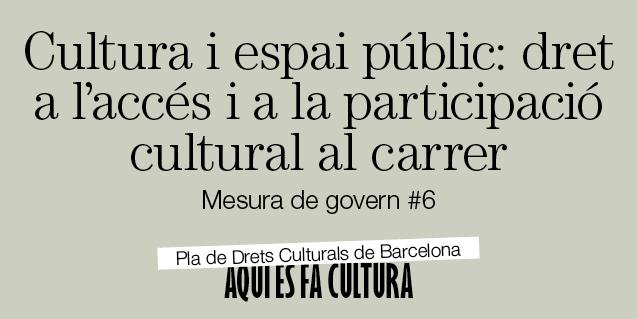 It is one of the actions of the new government measure 'Culture and public spaces', which also includes setting up a new creation factory.

Barcelona will triple the number of Street Music spots from September onwards. If, at the moment, there are only 18 spaces set aside, all of them in the Ciutat Vella district, by fall, there will be around fifty distributed throughout all the districts of the city. Already before that, in June, a pilot test with live music will take place in five different districts. This is one of the actions included in the measure Culture and public spaces: the right of access to, and participation in, culture in the street, part of the Barcelona City Council's Cultural Rights Plan. The measure stems from the defence of public space as one of the main stages of the city's cultural life and, as such, it is necessary to guarantee access to it to allow the right to the city and to cultural participation in a sustainable way, attending to very diverse needs and realities and making these uses compatible with neighbourhood coexistence.

The range of proposals also includes the creation of a new creative factory, the 12th in the city. It will be El Cilindre d'Horta and aims to become a place of reference in urban art. It will also be a space with an international perspective and connections with other facilities and projects of similar characteristics. The project is the result of the joint efforts of the Horta-Guinardó District, the Barcelona Institute of Culture and the Municipal Institute of Urban Landscape.

The Sant Joan bonfires, on the way to becoming a Cultural Asset of Local Interest

A working group will study the feasibility of declaring the bonfires of Sant Joan in Barcelona a Cultural Asset of Local Interest (BCIL). People linked to the platform #CrememBarcelona, created to protect the tradition of Sant Joan, and the different areas of the City Council involved in the use and cultural expression in public space and the promotion, respect and protection of expressions of popular cultures, such as the Directorate of Memory, History and Heritage, the Directorate of Cultural Fabric of the ICUB, the Department of Environment and Urban Services of the Department of Ecology, Urban Planning, Infrastructure and Mobility, and the Department of Prevention and Safety, will be part of it. It is also an action that has been imposed in the framework of the Culture and Public Spaces measure. Other initiatives include the incorporation of a cultural perspective in the city's urban planning; the promotion of cultural superblocks; the constitution of a Night Commission to jointly address the challenges surrounding the night and its cultural dynamics; and the incorporation of the principle of the agent of change, common in the United Kingdom, to preserve the ecosystem of music venues and live concerts.

More information can be found at this link.