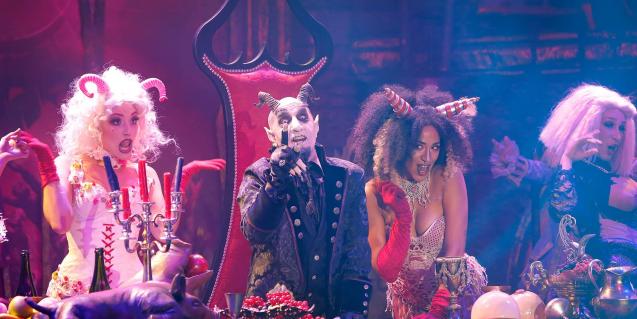 The Circo de los Horrores is offering 36 performances at the Port Vell of a show of orgiastic excesses, lust and carnal pleasures.

Legend has it that once every one hundred years, Lucifer offers humans a night of sex and debauchery in exchange for their souls. And, of course, the temptation is too great not to fall in.

Lucifer, the fallen angel and king of the underworld, is the architect and master of ceremonies of this feast, assisted by his scribe, Litte Piglet. The banquet includes the mistress Donya Eutanàsia, a vegan piglet and Làmia, the sexiest she-devil.

The winner of the Premi Nacional de Circ 2003, Suso Silva (Ourense, 1962), is the director of this show. He studied acrobatic arts at Bemposta - Ciudad de los Muchachos, graduated in mime and pantomime at the Institut del Teatre and later studied buffoonery in Paris and theatrical figure skating. In 1986 he founded the company Os Paxaros and later collaborated with La Fura dels Baus and several European circuses. In 2007 he created El Circo de los Horrores to attract young people. Since then, he has produced five shows — Circo de los Horrores, Manicomio (2012), Cabaret Maldito (2015) and Apocalipsis (2018) — which have captivated more than three million spectators.

Bacanal can be seen in Barcelona until 12 June and will be performed by some of the great stars of the company, such as the Dúo Moh, the contortionist César Pindo, the pole dancer Jeni Essence, the specialist Lan Shi Xiong and the aerial tape expert Akos Birizt.

Ticket prices range from 17 to 65 euros and can be purchased in advance at this link.