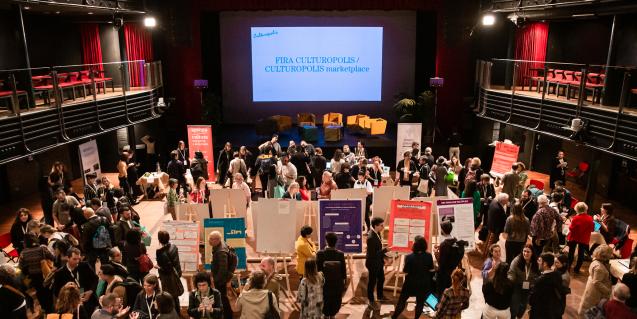 The third day of CULTUROPOLIS hosted the presentation of the Cultural Rights Survey 2022, which places the city as one of the few in the world with a survey of this kind.

Yesterday, the third day of CULTUROPOLIS took place at Parl·lel 62 and El Molino. As usual, Alba Rihe and Gloria Ribera opened the session with a joking welcome and delighted us with two coplas especially dedicated to the international audience. And just as they appeared, in a short but effective way, they disappeared and gave way to the session that opened the day: the presentation of the Barcelona 2022 Cultural Rights Survey. With this initiative, Barcelona is one of the few cities in the world to have a survey on cultural participation that incorporates diverse practices (beyond attendance at events) and evidence of inequalities in the right to participate in the city's cultural life.

The presentation was given by Montserrat Tort, Head of the Technical Office of the Institute of Culture of the Barcelona City Council (ICUB), Nicolás Barbieri, Associate Professor at the Open University of Catalonia and researcher in the field of cultural rights, and Assumpta Manils, data analyst at the Technical Office of the ICUB. "The survey tries to measure the cultural participation of people in the city and the role of people in culture," explained Barbieri. The professor pointed to this as crucial to understanding the most relevant cultural elements in the life of the neighbourhood, how culture is experienced and new ways of understanding it. "It is very relevant to understand that culture is done in classic places such as theatres or civic centres, but looking at the results of the survey and observing the views of the population, the way in which people consider markets or educational centres to be key spaces for culture is growing," he said.

The survey also analyses the economic aspect linked to participation. People with a low income are associated with less participation in the city's cultural life, but according to the survey "there is an increase in attendance at cultural activities in low-income neighbourhoods compared to three years ago", Barbieri pointed out. "Let's break the stigma: in low-income neighbourhoods there is no lack of appreciation of culture," he said. Another very relevant piece of data from this survey dates back to 2019, when 36.6% of the people surveyed had expressed wanting to devote more time to cultural practices. The results presented yesterday show an increase to 56%, a significantly higher figure that demonstrates the need for culture on the part of Barcelona's citizens.

Another highlight of this CULTUROPOLIS has been the sharing of real projects, carried out in different municipalities and regions of the world, which broaden the exercise of cultural rights among citizens. Both on Thursday and yesterday, El Molino was immersed in a series of quick and at the same time detailed presentations of these success stories, animated by Alba Rihe and Gloria Ribera, who enlivened the time between presentations with their performances. What had been a space traditionally linked to entertainment and spectacle, El Molino, has these days become a laboratory full of innovation and cultural diversity.

One of the projects presented, for example, was Trobades: les dones en les arts escèniques, born in 2020 in response to the need to create spaces for this group to meet and gain visibility in Vallès Oriental. The project offers a space to provide tools and resources so that women can gain presence in the world of the performing arts. Another project, MAR, creates a mediation platform to promote relevant actions for change in contemporary cultural institutions and other initiatives focused on the training and dissemination of their work. Manifesto for the mobility of artists and culture professionals in the mediterranean and beyond sets the basis for further public discussions and debates to address the challenges of mobility within the cultural sector and to promote exchange and learning in the Mediterranean region. And Play it loud! has the mission to empower women and underrepresented youth groups through music.

All the projects presented during the conference were brought together at the CULTUROPOLIS Fair, this time in the Paral·lel 62 hall, where stands and posters were set up to explain the work carried out, exchange experiences and opinions, gather new ideas and promote pioneering initiatives. Music, theatre, research, art and education were mixed in this space which, for an hour and a half, was filled with conversation and culture. In the room one could find initiatives to take theatre to the street, to make it inclusive, innovative ways to care for the historical heritage and make it more attractive, new artistic proposals, new formats to reach more audiences... The list is long.

The closing round table featured speeches by Paola Leoncini Bartoli, Director of Cultural Policies and Development at UNESCO, Jordi Pascual, Coordinator of the Culture Committee of the United Cities and Local Governments network, and Jordi Martí, Sixth Deputy Mayor and Head of the Department of Culture, Education, Science and Community of the City Council. At the session, they reflected on the effect of CULTUROPOLIS on Barcelona's cultural policies. For his part, Leoncini acknowledged the success and the need for these first conferences, since "they make it possible to show concrete results in the advancement of the effective exercise of cultural rights". For this reason, he expressed his wish for continuity in many more future editions. Leoncini also valued the state of the issue of cultural rights and, from his global vision, believes that today there are many more actors on the table than there were only seven or eight years ago, to which is added a considerable and positive change in the patterns of social inclusion. "I really believe that this is a real boost for culture and cultural rights," he said.

The day brought together many more activities, such as the spaces for sharing community projects Open Windows, several round tables and the presentation of the seventh Government Measure Culture and digital rights, of the Barcelona Cultural Rights Plan. The icing on the cake were the shows Cyberexorcismo and Lívid, la vida loca, which anticipated the atmosphere of celebration that will be experienced today at the Celebration of cultural rights on the street, the final event of CULTUROPOLIS.