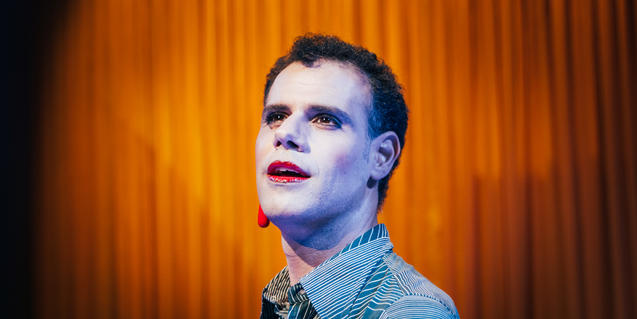 The actor and singer is accompanied by guitarist Marc Sambola to pay tribute to the unclassifiable artist.

Ocaña, reina de Las Ramblas returns to a Barcelona theatre, and does so through the front door, having been awarded two Critics' Awards, two Teatre Barcelona Awards, and three nominations for the Premis Butaca. From February 17 to March 7, you will be able to see on the Escenari Joan Brossa how the actor and singer Joan Vázquez revives what was an unclassifiable artist and closely linked to the urban landscape of Barcelona, ​​who already performed when no one called them thus, a naive painter and pro-LGTBI rights activist (when no one had used those letters in that order yet). The show, which could be labelled as a theatrical recital, was born from the drama written by Marc Rosich - a great connoisseur of Ocaña's life and work - who also directed it.

On stage, Vázquez is accompanied by guitarist Marc Sambola, the musical director of the production. Essential music for a one-hour show. Some of the live episodes of the emblematic character are reviewed to the rhythm of the song, and the audience can listen to songs that fascinated the honouree, such as Tatuaje, Ojos verdes, Y sin embargo te quiero or La niña de fuego. In short, a work to remember José Pérez Ocaña (Cantillana, 1947 - Seville, 1983), or to discover it to those who know little or nothing about him.

You will find more information and tickets at this link.