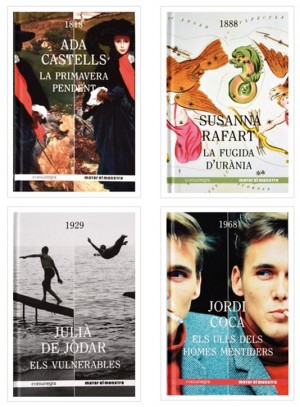 In 1818 the English writer Mary Shelley created Frankenstein, a monster who pioneered a literary genre, science-fiction, and who two centuries later is still inspiring other writers. Thanks to Shelley, the scientist Victor Frankenstein makes a creature out of bits of bodies, defying the laws of nature and science. Barcelona is the result of adding together the great events that have taken place there over the last centuries. After creating the Eixample, which urbanised the plain outside the Roman and medieval walls, the 1888 Universal Exposition made it possible to recover the land that had been occupied by the oppressive Bourbon military fortress. In 1929 the city once again vibrated and grew on the occasion of the International Exposition that made Montjuïc one more neighbourhood. And with the 1992 Olympic Games and the Forum of Cultures in 2004, the seafront was the great protagonist of the urban transformation that recovered Barcelona’s view of the sea.

These great landmarks in Barcelona’s history, among others, have prompted the Comanegra publishers to make the leap to Catalan fiction, after centring on non-fiction and translations for ten years, an experiment as risky as the 19th-century scientist’s. To form the body of the project, in summer 2016 the ‘mad scientist’ of this publishing laboratory, the publisher and founder of the imprint, Joan Sala, got together seven writers belonging to different generations and commissioned them to write seven novels taking place in Barcelona between 1818 and 2018, the 200 years since Shelley wrote her book after the mythical evening with Byron and company in a mansion on Lake Leman. The chosen authors were, in alphabetical order, Mar Bosch, Núria Cadenas, Ada Castells, Jordi Coca, Julià de Jòdar, Miquel de Palol and Susanna Rafart. Each of them had to set their novel in one of these key years: 1818 (the year the novel was written), 1888 (Universal Exposition), 1968 (May ‘68), 1992 (Olympic Games), 2004 (Forum) and 2018 (today). Quite a challenge for writers not used to working to commission.

But there were more requirements. A character who wanders through the seven novels, in two of them under the name of Francesc Castany (if you read it quickly it sounds like Frankenstein) and in the others with other names, but always the author of a novel or book: El nou Prometeu (‘The New Prometheus’), a treatise on the superman, where he prophesies a utopian future for Barcelona which will come true in 2018 and which is a direct reference to the subtitle of the London work. Castany stars in the novels or he can appear in brief cameos or changing name as he travels these 200 years of exile hiding a secret the reader can only discover by reading the seven books, yet another incentive to read them all.

In Shelley’s novel, the monster, having being abandoned by its creator, wanders in the forest hiding from people until it eventually commits several murders and is pursued by its creator, who wants to finish it off. ‘Matar el Monstre’ (‘Killing the Monster’) is the name of the project which, in the opinion of another of the people behind it, the linguist Francesco Ardolino, will eventually make up ‘a kind of great Barcelona novel, which in the 21st century must be prolific or nothing’.

The first four volumes have already been published. The first to come out onto the street in search of readers was the one by Ada Castells. She signs La primavera pendent, set in Barcelona in 1818, in which the daughter of a recently deceased printed fabric factory owner has to marry a mysterious young man, Francesc Castany, to keep the business afloat; a story of changing female roles that, like today, clash with a society that does not make things easy for women.

The second instalment of this literary meccano, La fugida d’Urània, by the poet Susanna Rafart, is set in the convulsive city of 1888 as it struggles to modernise. Here a young photographer spends his time capturing the image of the new Barcelona in the Universal Exposition, but fails to realise the social revolution going on in parallel. The third title is signed by Julià de Jòdar, who returns to writing after announcing his retirement. His novel Els vulnerables is set at another great international moment, the 1929 Exposition, a subject not often dealt with in Catalan fiction. The main character is a gloomy figure, Frank Goldstein, who experiments with poor workers in his factory in Can Tunis with the intention of creating ‘the Super Steelworker’. Before all else, this is the story of a bloody struggle by the working classes to achieve dignity, which includes charges by the Guardia de Asalto (Assault Guard) in 1932 which according to the author were inspired by the charges on 1 October last year.

May features 1968, which Jordi Coca takes as the setting for his novel Els ulls dels homes mentiders: a young bourgeois discovers the anti-Franco student movements at the university and the Catalan artists in Paris in 1969.

The fifth and sixth parts are scheduled to appear after the summer. One is the novel by Núria Cadenas Secundaris, in which the city of the Olympic Games coexists with Can Tunis, Wad Ras prison and the Turó de la Peira, the ‘b-side’ of the city, which was not only not shown, it was hidden. The other is Vindràs amb mi després del diluvi, which is being prepared by Mar Bosch, and in which two brothers arrive in the Barcelona of the 2004 Forum to get over a personal deluge. The final instalment, in December, is signed by Miquel de Palol. Angèlica i Rafel is a spy story in today’s Barcelona, a face-off between truth and lies in a philosopher who questions and relativises everything.

Once this new Frankenstein is completed with these seven bodies, Comanegra will continue its wager for fiction in Catalan, without the reminiscences of the 19th-century monster.