The City Council has now completed work to urbanise sector 8 of the neighbourhood of La Marina del Prat Vermell. Work was carried out from C/ Acer to C/ Ascó (between C/ Motors and C/ Arnes), in C/ Cal Cisó (between C/ Acer and C/ Ascó) and in C/ Motors, which has now become an avenue of two lanes and a bike lane. The completion of the work is another step to drive the gradual transformation of the industrial fabric and warehouses into a community space combining housing, greenery and economic activity.

The streets of Cal Cisó, Acer and Ascó are 20 metres wide, with a road surface 6 metres wide and asymmetrical pavements: one 5.2 metres wide and the other 8.8 metres wide. A lineal parterre has been built along this wider pavement, and on both sides of the streets there are plane trees, rosewood and maple.

Carrer dels Motors now becomes an avenue stretching from C/ Metal·lúrgia, on the municipal boundary with L’Hospitalet, to beyond Pg. Zona Franca. This provides continuity for the existing section, adding a 3-metre-wide central strip to the old road surface (on the side nearest the mountains), a 9-metre-wide road surface and a pavement 15 metres wide carrying a two-way bike lane. The improvements will also benefit the access to and from the Institut Mare de Déu de la Mercè, also located in C/ Motors.

Besides the installation of water, gas, high and low voltage power, telecommunications, sewerage, watering systems, street lighting and traffic lights, new hot and cold networks have been added to the neighbourhood (Ecoenergies), along with saturation zones and sustainable drainage. All vegetation and permeable pavements form part of the system being implemented in this new neighbourhood, with rainwater drainage into the subsoil. Rainwater falling on the pavements is directed to the parterres, where it is stored and managed before being filtered into the ground. In contrast, water which falls onto road surfaces is considered too dirty and is directed towards a system of unitary drainage sumps.

Carried out by the Municipal Institute for Urban Planning (IMU), the work has enabled some 16,500 square metres of land to be renewed, with an investment of 8.4 million euros.

A new urban layout and infrastructures plan was approved in 2019, to be developed over a period of 16 years. The project covers an area of 75 hectares and will turn La Marina del Prat Vermell into a hub for community life and economic activity in the Barcelona metropolitan area. The plan is to build 28,000 homes, public facilities and 12,000 publicly owned homes, 5,160 of them with protected conditions and 1,086 of them homes with services. Greenery will be the main component for the neighbourhood, with a central park of 2.4 hectares and a high street of 720 metres running parallel to C/ Foc. The various spaces devoted to economic activity should help create between 8,000 and 11,000 jobs.

In terms of execution, the project sets out fourteen sectors to be developed through urban plans defining the spatial layout. The plans for five of these sectors have already been approved and are at the urban management stage (re-parcelling, development projects etc.), while the plans for a further two are being processed and another is at the preliminary study stage. Now completed, sector 8 is the second area where roads and pavements have been built.

In terms of housing, four blocks with a total of 200 protected homes have been built, 32 of which are publicly owned homes with affordable rents, with a further 32 part of a cohousing project on municipally owned land. Another four buildings are under construction and will provide 390 more homes. Two of these are municipal developments offering 180 homes between them with affordable social rents. Three more blocks have permits and will provide 375 homes (226 of them protected) and a tertiary building, while a further three buildings are in the process of getting permits and will provide 515 homes between them (161 of them protected). 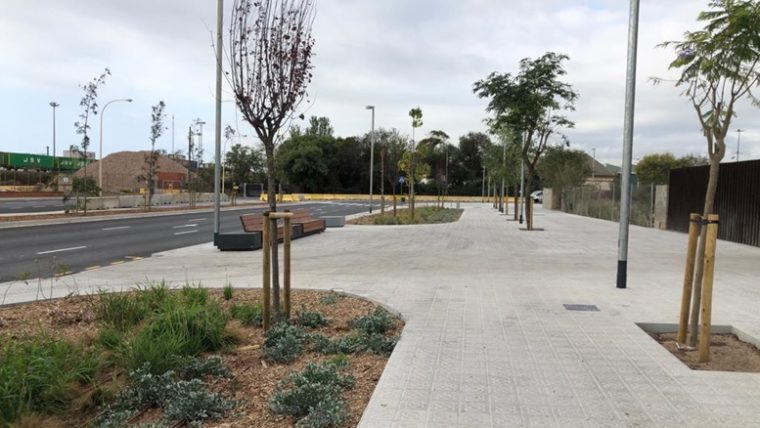