Alessandro Baricco: The virus and ‘The Game’ 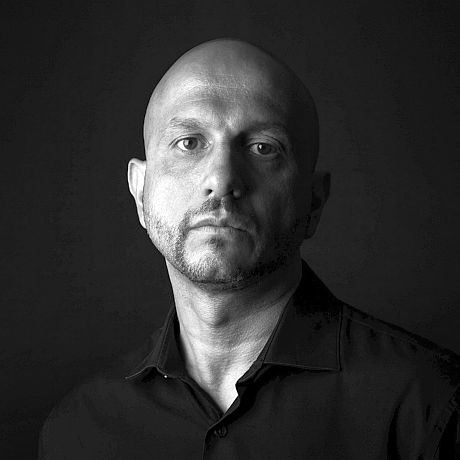 Jorge Carrión is a writer, journalist and co-director of the UPF-BSM Master in Literary Creation. He writes regularly in The New York Times and La Vanguardia newspapers.

The first international conversation about the coronavirus is being held virtually, as it couldn’t be done otherwise. Alessandro Baricco explains that the dynamism of truth is more important today than its accuracy and that, in this context, both the computer and biological virus surf at an ultrasonic speed.

Today is Monday, 16 March, and the Italian publishing house Ponte alle Grazie has just published Virus, by Slavoj Žižek, a journal about the mutations triggered by the crisis that is, in itself, a mutant book. The e-book will continue to grow day after day and whoever buys it can download its successive updates for free. No wonder the first book in a Western language on the pandemic is being published in Italy, not only because its publishing system is particularly fast, but because this foreign country – which combines a timeless and picaresque classic spirit, enlightenment and Catholicism like no other country – has become, for the rest of the Europe and America, our imminent future. So my conversation today with Alessandro Baricco is a conversation with the day after tomorrow.

Like everything in recent weeks, this public interview has gone through several stages, and many of them have lasted just a few hours. The interview had featured on the Centre of Contemporary Culture of Barcelona’s agenda for months. We had arranged to meet in person one hour earlier and had a reservation afterwards at a nearby restaurant. But last week having Baricco come from Turin started to look unfeasible because the Covid-19 confinement had begun in some regions in northern Italy. When we knew for a fact he wouldn’t be coming, we still planned to forge ahead with the event via Skype and with an audience. Then flights from Italy were cancelled. Schools and cultural centres were closed. We decided that I would go to the CCCB and that we would shoot not just the interview, but also the empty space as a rare and, in its own way, eloquent document. But then the official lockdown and remote working commenced. In the end, we did tests to hold the conversation virtually, and thus began a multiple chat to make sure that the recording was done properly for this afternoon’s fake live show.

Baricco appears on my screen looking dishevelled and with a big bottle of water in his hand; he puts it aside, off-screen, sits down and starts playing classical chords on a keyboard. After saying hello to one another, I don’t ask if he’s playing the keyboard of an organ or a piano, or if I’m looking at him through a computer camera or his mobile phone: I’d rather find out whether he’s watching ZeroZeroZero, the new adaptation of a book by Roberto Saviano. “I don’t watch series”, he answers to my surprise, because The Barbarians and The Game are two essays that explain the essence of social networks, video games, television series, speeches and strictly contemporary interfaces. He tells me that he did see a few episodes of Gomorrah, which he thought were brilliant, but that he is, in fact, a classic reader of the Novecento [20th century] movement, although he is extremely interested in the 21st century.

Baricco asserts that “democracy at this time works as an emergency system, it is the ambulance”.

The CCCB technician counts down from ten to zero and starts recording. I begin by introducing Baricco, saying that we are in the midst of a terrifying and yet fascinating historical context in which the concept of the viral has returned to its corresponding field, that of biology, although – like this conversation – it is not understood without the one on screens. He explains the reason to me: “For the mind of the intellectual, what is happening, despite the pain, is a celebration because everything you see is changing the world.” And then he uses a metaphor very characteristic of Paul Virilio: “We had a car accident, a global car accident, we are all involved, we are still trying to get the deceased and wounded out from the jumble of iron in which the monstrous vehicle in which we were travelling was confined, and then we’ll start to wonder how it happened, whether it could have been avoided, whether there will be a next time.” He extends the metaphor: “democracy at this time works as an emergency system, it is the ambulance; hence the confidence we suddenly have in it, we come from years of deep crisis of confidence in the political and scientific class, and in one week that’s all we have. And this is just a general rehearsal. We will spend the next half-century like this. The planet is on its way out.” If the Spanish Civil War was the prologue to the Second World War, coronavirus – concurrent with an unusually warm winter and with the fires in Australia – is the introduction to the radicalisation of the new climate order. Or environmental disorder, increasingly more chaos.

It makes no sense for this feature to be a complete summary of the conversation because the video will have been posted on the CCCB’s website by the time someone reads these lines. We talk about his work, that since Silk creates structures more characteristic of the Internet than of literary tradition; about his admiration for authors such as Emmanuel Carrère or Javier Cercas, because the way they plan their books, according to him, borders on perfection; about the “masterpiece” concept, which according to Baricco has stopped making sense because we are all already looking for series, constellations, not unique, spherical devices; about the bookshop he opened twenty years ago in Turin, which only sold eighteen books, painstakingly chosen and recommended by so many great readers (in audios that customers could listen to, long before podcasts became all the rage); and about Turin’s Scuola Holden, a school teaching writing and humanities, classical and especially digital storytelling. What does make sense is to leave a record of what is likely to have been the first international conversation about coronavirus, when we were still in the initial weeks of the crisis. Because this experience of restriction needs to be self-critical, recorded and remembered. 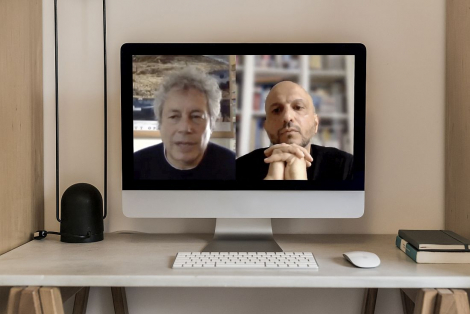 A moment in the virtual conversation between Alessandro Baricco and Jorge Carrión, organised by the CCCB [Barcelona Centre of Contemporary Art] on 16 March 2020.
© Curro Palacios Taberner

Between Silk and The Game, through The Barbarians and many of Baricco’s other books, is a common thread that lends his work cohesion, that is, a journey. All his texts feature a high degree of movement and restlessness. The chapter on Google in The Barbarians reads: It’s “as though Meaning, which for centuries was linked to an ideal of permanence, solid and complete, had gone out in search of a new habitat, dissolving into a form that is mostly movement, extended structure, journey. Asking oneself what a thing is means asking oneself what road it has travelled outside of itself”. Searching for the new logic to search engines, trying to understand how they have altered the ways in which we are informed, we learn, we find out, he almost rewrites Ithaka, Cavafy’s poem. The question and its answer, the problem and its resolution no longer matter: the path of connections, detours, encounters, revelations, distractions and discoveries now prevail.

I ask him if we will look for the clues to understand what’s going on in the 20th century. Whether the survivors of the Second World War and Nazi extermination, or the philosophers and cultural critics who analysed the Vietnam War or the fall of the Berlin Wall will help us understand the pandemic and its expected sweeping changes. I know that in The Game he asserts that computer scientists, inventors, programmers, and Silicon Valley’s prophets created the new paradigm in which we live as a somewhat conscious rejection of the values that canonical thinkers and writers advocated, like depth and memory. That’s why I’m not surprised that he replies: “No, no, everything that is happening is typical of The Game.” Both the good and the bad: thanks to devices, tools and social media, awareness is raised faster and many lives are saved.

The virus has slipped like no other through the pixelated membrane and motorways of globalisation, platforms and airports, social networks and tourism.

“What has probably happened in The Game, due to its low density, is that the dynamism of truth has become more important than accuracy. In elementary terms: an inaccurate truth is worth more, but with a proper plan to cross The Game, than an accurate but slow truth in its movement and unable to tear itself away from the point where it was born”, writes Baricco in his book, where he discusses the art of storytelling in the 21st century like engineering that must be aerodynamic to attract attention in the new ecosystem. The virus has slipped like no other through the pixelated membrane and motorways of globalisation, platforms and airports, social networks and tourism. And its ultrasonic speed was precisely due to its low density, its capacity to surf, inaccurate, unknown. Although we have its genetic map, we are still not well acquainted with it. The symptoms it causes are variable. Almost half of the tests taken are negative, even though the virus has inoculated those bodies. Not even its name reflects the truth: we call it coronavirus, but the pathogen is actually not even called Covid-19 but rather SARS-CoV-2. For too many weeks we claimed it was a flu. Now it has become synonymous with another word: war. It’s elusive, aerodynamic and post-factual. A creature with a genetics that long predates the word “virus” or its Greek etymology (toxin, poison). A champion of evolution and adaptation that spreads just as easily through human skin as on the surfaces of The Game.

Jorge Carrión is a writer, journalist and co-director of the UPF-BSM Master in Literary Creation. He writes regularly in The New York Times and La Vanguardia newspapers.

Virtual conversation between Alessandro Baricco and Jorge Carrión (CCCB)Go to