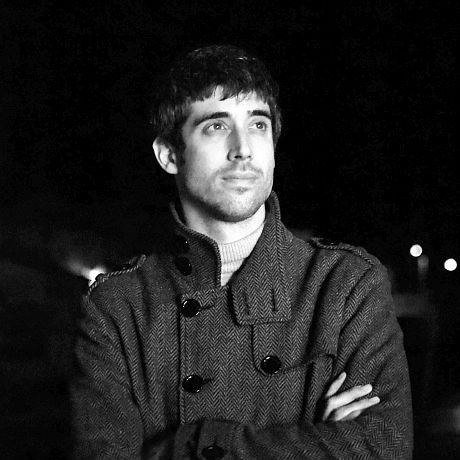 Víctor García Tur (Barcelona, 1981) has a degree in Ophthalmology.

Similar: we see the little hands and little fingers (oh, the defining opposable thumb) and they seem so human. Then we look them in the eyes and the familiarity is complete. When we look at our cousins, any member of the order of primates, the lightning in the depths of their eyes is the best indication of an intelligence similar to our own and an indisputable closeness. When we study their day to day life, in the cleared forests of Borneo or on the disputed banks of the Congo, it is inevitable that we see our reflection in each of their gestures.

The day that the hundredth monkey washed an apple before putting it in its belly, a strange phenomenon was observed throughout the region: everywhere the monkeys washed their fruit before eating it.

However, simians (and even prosimians) exhibit behaviours that continue to surprise us.

A famous example occurred on Koshima Island, where in 1958 a group of scientists had the privilege of observing a revealing phenomenon in a colony of Japanese macaques (Macaca fuscata). Science historian Aristides Acheropoulos explains it with the air of the fabulous that imposes wonder on everything: “Some time ago, in a small village in Japan, there was a monkey that we will call Azamuku. The rudimentary monkeys of that time used to gobble up the apples that they gathered from the ground of the parks in the area. These apples were muddy, dusty and often decayed. One day, Azamuku approached a pond with carps that was supposed to brighten up a town hall garden, washed the apple in the water, and then, of course, ate it with delight. From then on, he washed his apples before sinking his teeth into them. The practice spread from Azamuku to a second monkey, then to a third, then to a fourth, and so on, as it seems. A sizeable group of monkeys in the area began to clean their fruit. What is interesting is that after a while, neighbouring monkeys from other municipalities began to prefer clean apples and used the method innovated by Azamuku. The day that the hundredth monkey washed an apple before putting it in its belly, a strange phenomenon was observed throughout the region: everywhere the monkeys washed their fruit before eating it. On Koshima Island, we could say, the critical mass was 100. Once this critical mass was reached, the information spread with the exponential speed of a flu pandemic.”

Undoubtedly, this Azamuku was a Newton among the macaques. He was capable of thinking beyond the mental bounds of his species. Now it is not so clear whether the knowledge was spread by the simple impetus to imitate (of which primates know a lot) or if there was some type of telepathic connection (“morphogenetic fields”, Sheldrake might say) enabling a species to share useful information, overcoming the barriers of time and space... Naturally this led to fierce controversy among scientists. This article does not aim to shed light on these murky motives, but only to ask about something experienced in Barcelona recently that has triggered a very interesting discussion since it was covered by the media, which none of our fellow residents have been able to avoid either at work, with their family or when queueing at the supermarket. Social networks were full of them and some jokes were made that distorted real and established facts, but the background is the same and what is extraordinary about it continues to astonish us.

The now-famous monkey Brigitte, needless to say, held a disposable coffee cup in her hands. The photos taken later show us the delightful way that the monkey’s thumb holds down the plastic lid (high density polyethylene) while she cradles the burning cup (cardboard) with her index finger.

The first warning about the phenomenon was raised by a worker at the Barcelona Zoo, Margarita Rius. On Saturday, 9 February, Rius uploaded a photo to her Twitter account that was massively shared, commented on and commented on again. Quoted by the newspaper La Vanguardia, Rius said: “Like every Saturday, I went to do my work in the primate area. I admit that I was a little sleepy because of a party I had been to the night before [...]. I decided to wash my face in one of the fountains we have for visitors. I took off my glasses. I still had not wiped my face when I saw it. In case it was just me being myopic, I put my glasses on in a hurry. Brigitte [referring to one of the red monkeys (Erythrocebus patas) of the colony living in the zoo] walked alone all the way to the glass of the window. In her hand she held a strange object. I didn’t understand exactly what was happening, so I couldn’t predict what impact it would have, but something inside told me to capture the scene with my mobile phone. Unconsciously, I must have grasped the awesome importance of the moment, because not only did I take the picture, but I posted it immediately. I did feel proud that I was the first to tell people about it.”

The now-famous monkey Brigitte, needless to say, was holding a disposable coffee cup in her hand. The photos taken later show us the delightful way that the monkey’s thumb held down the plastic lid (high density polyethylene) while she cradled the burning cup (cardboard) with her index finger. The videos go even further, showing Brigitte taking little sips as she continued to move about, from here to there, up and down, restlessly. At first she was alone and derided by everyone, but after a few days she found a worthy companion for her coffee trips in Koeman (a young specimen with prodigious thighs). In less than a week, half a dozen Erythrocebus walked around the little cup rigorously, alone or in pairs, happy or anxious in their unfathomable (for us) thoughts. Once the coffee was finished, the monkeys tossed the container indifferently into the safety hole surrounding them, a spectacle that amused the crowd, attracted to the zoo by the news and the pleasure of photographing them and being a part of history. Unaware of the people’s curiosity, the monkeys gradually and unstoppably copied the example. Copèrnic, the alpha male, was one of the last to join the trend, but in the end every member of the troop had converted.

In any case, the innovation of the misnomered “coffee to go” has disconcerted the troop, its uses and hierarchies. In fact, Copèrnic has been dethroned. Koeman has risen before him and won the favour of the females and immature males. Meanwhile, Copèrnic continues to stroll with the coffee cup in his hand, unable to avoid a certain expression of opposition that suggests a lack of adaptation. A little empathy leads us to see that Copèrnic’s dissatisfaction is caused by his feelings of embarrassment and the tension of wanting to hide them.

Víctor García Tur (Barcelona, 1981) has a degree in Ophthalmology.