The Land Use Plan for Ciutat Vella: Protecting community life 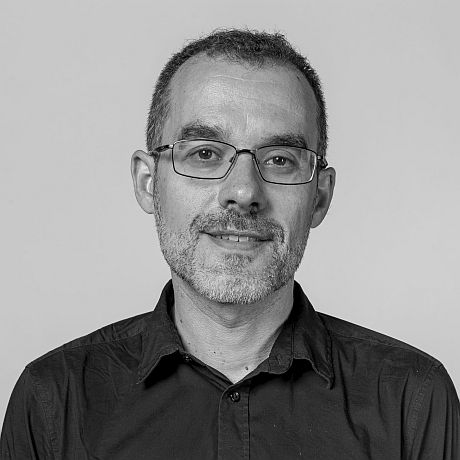 Barcelona, 1974. Degree in History, Diploma in Advanced Studies and Certificate in Research Sufficiency, all awarded by the University of Barcelona. He is the author of several books and publications focused on local contemporary history of the Sant Andreu neighbourhood and the city of Barcelona. 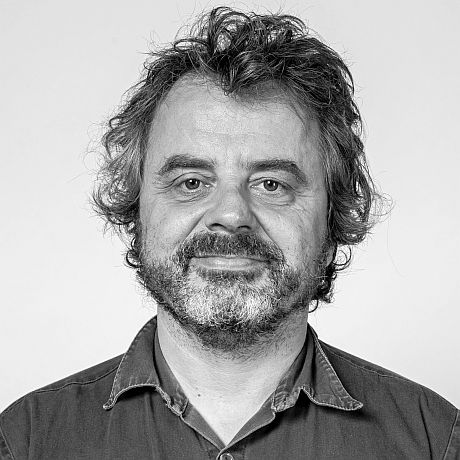 Since 1992, different Land Use Plans have been implemented in Ciutat Vella to regulate economic activities and urban planning licences. The most recent one, approved in 2017, places an emphasis on the promotion of local business. This instrument is essential to improve the quality of life and to ensure that residents can stay on in the neighbourhood.

The urban improvement of Barcelona’s historic quarter has been a priority of municipal governments since the recovery of democracy. Under this premise, impetus has been given to social, urban and economic transformation policies. Urban planning has been promoted and social actions have been developed, including interventions in the housing stock, the building of facilities and the creation of new public spaces in the city. With regard to public policies aimed at achieving economic transformation, a series of special plans for public tenders, hotels and other activities under what is known as the Land Use Plan has been carried out. It is an urban planning tool that regulates the conditions for the rollout of new licences in an area based on their impact on public space and on the curbing or the promotion of economic and social models.

This instrument is fundamental in Ciutat Vella, Barcelona’s central and historic district, an area that generates great interest among visitors and triggers an excessive saturation of crowds, as well as many tensions with residents and businesses. This large influx of visitors heightens the district’s appeal for the promotion of cultural, commercial, leisure, hotel and restaurant activities. This leads to an economic specialisation that results in the disappearance of activities aimed at serving residents, and causes certain nuisances for residents that even end up affecting their health.

To reverse this situation, the first Ciutat Vella Land Use Plan was rolled out in 1992 with the aim of regulating economic activities and resolving the problems they generated. It was the first in the city, followed by seven more, until the current one. These first plans, promoted by socialist governments, restricted activities — thus exerting a containment effect on growth — and limited the granting of tourist apartment licences. But it was not until the 2010 Land Use Plan that the regulation effectively stopped new licences with the introduction of a key regulating element: the maximum density of establishments.

Unfortunately, this pattern changed during the term of Convergència [Catalan nationalist, liberal political party]. The 2013 Land Use Plan opened up new licences in many parts of the district, a fact that was justified by appealing to the need to respond to the economic crisis. The regulatory nature of this urban planning instrument was perverted and it was used as an economic development plan aimed at tourism-related activities. This contradiction led to the courts declaring them null and void. 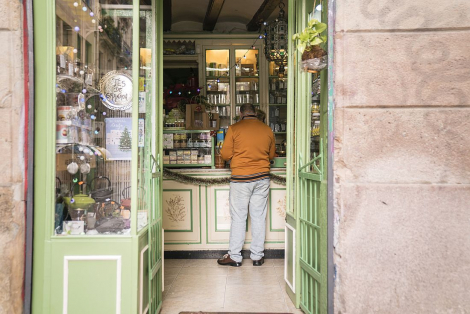 A shop open in the Ciutat Vella neighbourhood. © Clara Soler 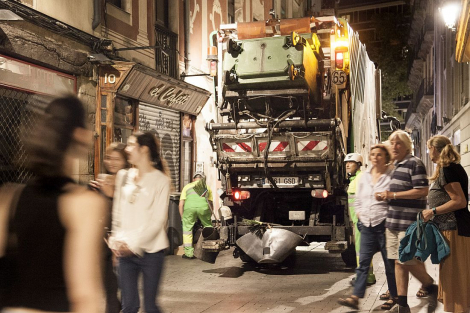 A truck collects rubbish on a street in the Ciutat Vella neighbourhood. © Curro Palacios

The major challenge was to strike a balance between the development of economic activity and the health of the area’s residents.

In 2015, from the new government of Barcelona en Comú [citizen platform currently governing in minority in Barcelona], we proposed amending the current Land Use Plan with a clear intention to eradicate the adverse effects that certain activities cause in the public space and to encourage business diversity, with special emphasis on local trade.

A study was undertaken entitled Estudi dels usos urbans a Ciutat Vella, tipus i conflictes [Study of urban uses in Ciutat Vella, types and conflicts] (Estudi 300.000Km/s, 2017), an innovative mapping of the movements of people, users of leisure facilities and visitors to the district. The findings obtained showed social vulnerability, the fragility of the residential fabric, expulsion processes due to the economic fabric’s excessive visitor-oriented business, and the conflict arising from the exercise of activities, mainly related to noise issues at night in the public space.

Moreover, the Barcelona Public Health Agency carried out the Estudi de valoració de l’impacte del soroll procedent d’activitats relacionades amb l’oci nocturn sobre la salut de les persones a Ciutat Vella [Study to assess the impact of noise from nightlife-related activities on the health of Ciutat Vella’s residents] (Barcelona City Council, 2017). Findings were obtained that point to the link between noise pollution and the serious impact on the health of those living in the district.

The findings of these two studies reset our political priorities in the formulation of the new plan, in which the protection of the lives of the Ciutat Vella residents was defined as the overriding objective. Because, despite the fact that the territory suffers from excessive tourism pressure and its community life has very often been forgotten by the various municipal governments, Ciutat Vella is still a residential district. It was therefore considered essential to preserve the life of its neighbourhoods as a core element to ensure that the Ciutat Vella residents continue to live in the district. The major challenge was to strike a balance between the development of economic activity and the health of the area’s residents.

Alongside the team of municipal technicians, the external writing team and citizens, we carried out a critical appraisal of the previous plans, adding regulatory improvements and legal consistency, and taking a painstaking census of all the activities undertaken in the area for the first time. We also rigorously demonstrated the prevalence of the residential use, the fragility of the urban fabric and residential vulnerability, defining the saturation threshold of activities consistent with the residents’ quality of life. To this end, we crossed the figures related to the accumulation of licences with the noise exposure graphs of the different sound level meters installed on public streets.

This saturation threshold was key to justifying the restriction of new licences in saturated areas. The most innovative element of the work of urban planners was the capacity to forecast the application of regulations; the writing team created a tool capable of simulating saturation scenarios based on the application of different regulation parameters.

For all the above reasons, the Higher Council of Associations of Architects in Spain awarded the 2019 Prize for Spanish Urban Planning to the Ciutat Vella Land Use Plan, the highest accolade granted by the profession in the realm of urban planning.

The economic monoculture has not increased and the trend of applying for new licences has been reversed: applications for local trade licences predominate, while licences for the restaurant sector and tourism-oriented activities are almost residual.

We mentioned that citizens also collaborated in formulating the plan through a participatory process led by the cooperative Raons Públiques. The process enjoyed the participation of different sectors involved in the community and economic domain. The findings obtained showed the impact that the saturation of tourism-oriented economic activities exerted on the lives of residents living in the district and the need to simplify regulation.

From the outset of work that led to the 2017 Land Use Plan we were aware that, although the opening up of activities was rapidly applied in Ciutat Vella, restriction would have much slower effects, as land use plans always act on what pre-exists. Therefore, although the economic model has not been changed, we can see that the economic monoculture has not increased and that the trend of applying for new licences has been reversed: applications for local trade licences currently predominate, while licences for the restaurant sector and tourism-oriented activities are almost residual. This puts us in a future scenario in which economic activities targeting local residents will increase and tourism-oriented economic activities will decrease.

However, a land use plan designed to protect the population living in Ciutat Vella does not suffice to change the model. It is one more cog in a wheel in which elements already approved in the last term and also developed in this one must be included: the plan to drive economic activity and business, the territorialisation of services by Barcelona Activa, a proactive and efficient inspections plan – accompanied by a strengthening of the legal services apparatus – and urban planning designed with the residents’ participation for their own benefit.

Barcelona must be a city that takes care of community life, with residents entitled to participate in citizen building processes and an Administration with the duty to guarantee this participation and community life. This is the spirit of the 2017 Land Use Plan for Ciutat Vella.

Barcelona, 1974. Degree in History, Diploma in Advanced Studies and Certificate in Research Sufficiency, all awarded by the University of Barcelona. He is the author of several books and publications focused on local contemporary history of the Sant Andreu neighbourhood and the city of Barcelona.

Land Use Plan for Ciutat Vella 2018 (Catalan version)Go to