Who does the reversal of a public land designation affect? The cases of Satalia and Font de la Guatlla 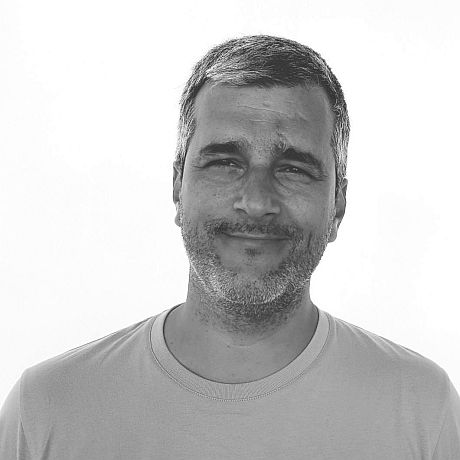 Architect dedicated to deliberating and debating urban challenges such as the public space, the right to housing and the right to the city.

Classed as green areas by the General Metropolitan Plan, the small neighbourhoods of Satalia and Font de la Guatlla have long lived under the threat of expropriation and demolition. In the last five years, two amendments to the current plan have saved the neighbourhoods from being axed, but, from the point of view of gentrification, the two instances of the reversal of the public land designation have had diametrically opposed results.

The property website Idealista offers a premises measuring 130 square metres, to be refurbished and located in the Sants-Montjuïc district for €725,000. It features two spacious rooms, “a large roof terrace with spectacular views of Barcelona” and, according to the same advertiser, the “real possibility” of changing its use to be classed as a residence. Even so, the price is hard to fathom until readers see that it is located on Carrer de Julià, in the “striking district of Satalia”. For those unfamiliar with this area adjacent to the Poble-sec neighbourhood, on the upper slope of Montjuïc mountain, the advertisement endeavours to convey that “living in Satalia is like living in Barcelona, but with the feeling of being on the city outskirts” and it highlights “the charm and natural character” of its small 19th-century houses with kitchen gardens. It would seem, then, that this “small village-like neighbourhood”, seven hundred metres from the Poble-sec metro station, must have always been an attractive and highly-reputed place, with high prices and reserved for the well-off classes. But nothing could be further from the truth.

Until only recently, Satalia was a small, informal neighbourhood, which was virtually unknown and condemned to demolition. The same thing happened to the upper area of Font de la Guatlla, on the other side of the Montjuïc exhibition grounds. Both developed on the northern slope of the mountain, when construction was in full swing, a period between the universal exhibitions of 1888 and 1929. Inspired by the city-garden model, both wished to flee from the hustle and bustle of the dense neighbourhoods downhill without falling into the untamed precariousness of the shacks further up. In 1976, the General Metropolitan Plan classed them as green areas, which meant their indisputable demise. While waiting for their properties to be seized by Barcelona City Council, the owners were prohibited from expanding the size of the existing buildings, which could only be subject to minor maintenance repairs. This affected both the sales price and the state of conservation and was conducive to the two districts holding onto their working-class nature and a suburban, lush and wonderfully decadent landscape.

Unsurprisingly, the gridlock in urban planning saved the two places from any transformation. It froze them in time and led to the conservation of heritage features of remarkable value. Satalia, for example, still has, in the form of a cul-de-sac passage, a section of the Old Road to Valencia, a medieval route of Roman origin flanked by masonry walls with large irregular ashlars. There are also cobblestones, water mines, fountains, pools, cisterns, washing places, air raid shelters from the Spanish Civil War and La Mangrana, a run-down house that Barcelona City Council has to turn into a community centre. As for Font de la Guatlla, the late 18th-century farmhouse of Can Cervera is noteworthy, also acquired by the city council to house a facility. The Olympics’ quest for urban order swept away the shacks further uphill, but the small houses with kitchen gardens and characterised by more secure building structures and ownership papers were more persistent. About ten years ago, the first expropriations took place and a number of houses in the Font de la Guatlla cluster were razed to the ground. Even so, the demolition did not go any further.

The shared uncertainty triggered by the threat of expropriation brought together the residents of both neighbourhoods, who organised into two respective neighbourhood movements. Both the Satalia Residents’ Association and the Platform of Those Affected by PERI (the 2004 Special Plan for Internal Reform) in the area of Turó de la Font de la Guatlla fought for many years for Barcelona City Council to recognise the acquired pre-existing right, reprieve the properties from demolition and rescue them from not being formally regulated. On both sides of the Montjuïc exhibition grounds, the residents got their way. Even so, the results are diametrically opposed. Since the public land designation has been reversed, properties in the Satalia neighbourhood have seen an explosion in prices that could have greatly benefitted many residents, while others have been condemned to the scourge of gentrification that threatens to destroy the neighbourhood. By contrast, the reversal of the public land designation in Font de la Guatlla has gone beyond the mere protection of real estate and has endeavoured to preserve the intangible heritage of its local community. What lessons can we learn from these two specific cases in the city? Without a doubt, the most important lesson is that they do not affect everyone equally. 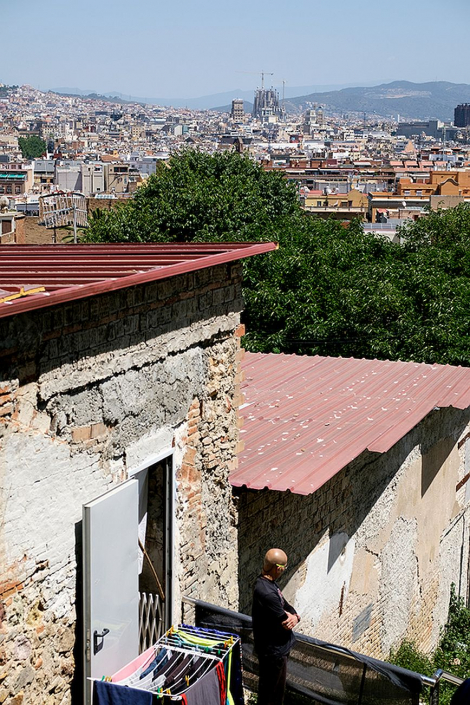 Views of Barcelona from the street Carrer Julià, in the Satalia neighbourhood.
© Arianna Giménez

In June 2014, during the term of Mayor Trias, Barcelona City Council’s Plenary Assembly withdrew Satalia’s public land designation by means of an Amendment to the General Metropolitan Plan (MPGM), which established that the neighbourhood was no longer a green area and was to be an area in which the “preservation of the urban structure” was required. Detailed planning of the surroundings and its uses was pending the development of a Special Urban Improvement Plan (PEMU) to be subsequently drawn up with the residents’ participation. Far from reassuring them, the reversed order worried the neighbours because it meant that the neighbourhood’s architectural heritage remained unprotected: all of a sudden, construction was now permitted in Satalia. For this reason, the residents’ association was actively involved in drafting the PEMU for Satalia, which was finally approved in September 2016. The new regulation protects the buildings, paths, fountains, old walls and all heritage features in the neighbourhood, while limiting the construction of new residences.

Once the concern over private land was dispelled, local militancy focussed on public land. The pianist Ana Menéndez, chair of the Satalia Residents’ Association, clearly explained this: “First we rallied together to ‘save our houses’; once this battle seems to be won, we shall work on a joint project.” Now, Satalia’s residents want La Mangrana community centre to become a place of meeting and work for “artists, architects and ceramicists”, with only one condition: “For it to be for people from the neighbourhood”. But what exactly does “people from the neighbourhood” mean? It goes without saying that people being from a neighbourhood and a neighbourhood belonging to people are quite different things. In a way, the architect Joan Fortuny, an active member of the residents’ association, raises this tricky paradox when he argues that the conversion of La Mangrana into a community centre is urgent because “the place acts as a shelter for poor people in intermittent squatting”. In fact, the place was the scene of the first eviction ordered by Mayor Colau, in July 2015, when the Guardia Urbana [city police force] received a complaint from some residents who alerted them to the “presence of illegal tenants”. Suddenly, illegality no longer affected the whole neighbourhood equally.

As far as Turó de la Font de la Guatlla is concerned, the removal of the public land designation is the result of an Amendment to the General Metropolitan Plan (MPGM) finally approved in February 2019. Just over four years after the precedent set by Satalia, the focus of this order was very different. Here, not only did it seek to preserve the fifty existing small houses, but also the community that inhabited them. In losing its designation as a green area, the constructed land acquired the status of protected housing. That’s a big difference. The substantial added value a property designated public land may gain is countered by official protection that curbs the sales or rental price for decades. In addition, the MPGM for Font de la Guatlla grants Barcelona City Council the right of first refusal and pre-emptive rights for these properties – giving them the option of preferential purchase, for the same price, if they are the object of a purchase between private parties –, so that the new planning serves to increase the amount of public housing in the neighbourhood. Thanks to these peculiarities, failing to take into consideration the withdrawal of the public land designation in Satalia, the residents of Font de la Guatlla have been protected regardless of their status. If they are owners, they will no longer live under the threat of expropriation; if they are tenants, they will be immunised against the exorbitant price hikes of their leases because rent will be controlled by the designation of protected housing.

The conclusion cannot be more surprising: in Satalia, removing a public land designation leads to gentrification; while in Font de la Guatlla, removing a public land designation becomes a tool to fight gentrification. The first case is an example of object-centred urban planning; the second one, of people-centred urban planning. Having ascertained this difference in outcomes, at least three paradoxical lessons can be drawn. They constitute three contradictions that our urban planning must still resolve if it really seeks to provide us with the city we need. One of them deserves to be labelled green populism; the second one is related to some sort of mineral patrimonialism; the third, at risk of being unfair to the democratising efforts of many neighbourhood movements, could be described as anti-social activism. Perhaps it’s best to start by clarifying the latter, which is the sorest. In a deliberate or unconscious manner, citizen participation may end up being anti-social when it fails to identify, as far as residents are concerned, the conflict of interests that exists between owners and tenants. If measures are not put in place to guarantee a certain amount of affordable housing, urban transformations that revalue owners’ properties may hike up tenants’ rents. Because “being from the neighbourhood” is not a requirement reserved to the owners; resident demands must take the interests of both current and potential tenants into account. 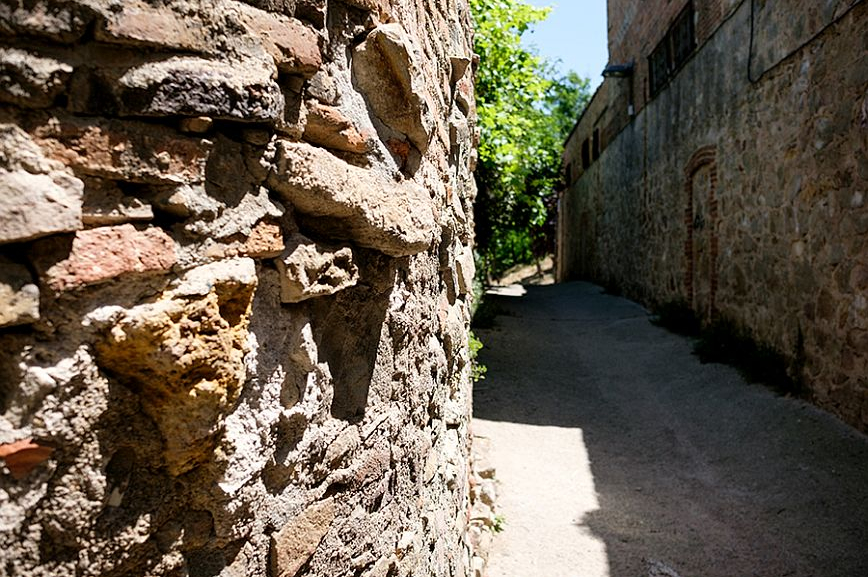 The passage Passatge València is what remains of the Old Road to Valencia, a medieval road of Roman origin.
© Arianna Giménez

It is easier to gorge on the other two contradictions. As its name implies, mineral patrimonialism has a fondness for the stones of the dead and is indifferent to living people. It forgets – or ignores – that inert real estate is only a means and that the ultimate end should be the life that fills them. Urban planning, one of the main municipal powers in a country with weak city councils, is equipped with the capacities to protect architectural heritage but lacks courage and resolution when it comes to preserving the intangible heritage that lends it use and meaning. To fight gentrification we do not want wistful cities such as Venice, a stuffed animal with glass eyes on display, but explosions of life like Naples, which knows how to make the most of its pre-existing heritage without overexploiting it.

Finally, green populism. Mario Gaviria called it “chlorophyll ideology”. It is a naïve idealism that confuses what is just green – a golf course – with what is truly eco-friendly – a railway –. In other words, if all of Barcelona’s residents lived in small houses with a kitchen garden, Barcelona would stretch as far as Mollerussa [a town some 130 km away]. The mixed and compact city the immediate future calls for does not look anything like the “small village-like neighbourhood”, a stone’s throw from the Poble-sec metro station, the property website Idealista seeks to sell us.

Architect dedicated to deliberating and debating urban challenges such as the public space, the right to housing and the right to the city.