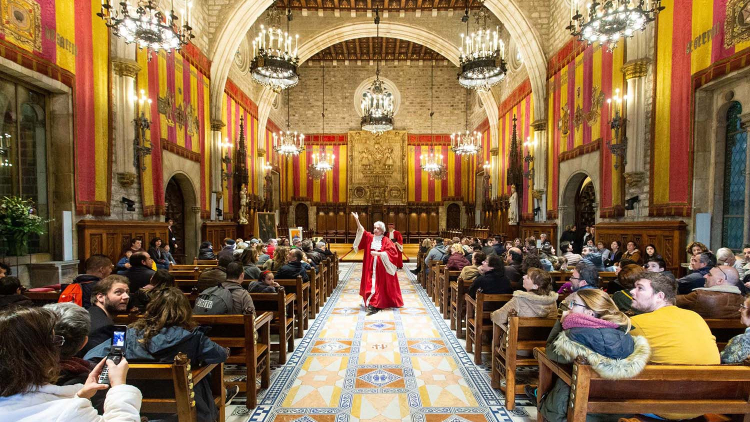 To mark Sant Jordi's Day, Barcelona City Hall will be open to the public on Saturday 23 April from 10 am to 8 pm.

It will also be possible to visit the Mirador Maria Aurèlia Capmany, the ninth-floor vantage point in the Novíssim Building (entry via Plaça de Sant Miquel).

In addition, guided face-to-face tours and virtual visits to the City Hall are available all year round. Find out more!

The tour of the building begins at the door in C/ Ciutat (Gothic façade) and, to liven things up, several historical characters will be greeting visitors in the City Hall's noble chambers.

Fourteenth century chronicler Ramon Muntaner will comment on the paintings by Josep M. Sert depicting the Almogavar troops’ campaigns in Greece, while Councillors Joan Fiveller and Rafael Casanova will be on hand to explain the history of the Saló de Cent. Maria Bosch, Rafael Casanova's wife, will talk about the tapestries and paintings by Sert located on the Escala de Honor.  Visits to the Saló de la Ciutat and Saló de Carles III rooms will be accompanied by harpsichord music.

Sant Jordi and the princess will be in charge of welcoming visitors and bidding them farewell at the C/ Ciutat entrance and in the City Hall’s courtyard.

As part of the open day, a puppet show entitled “The Legend of the Dragon” by the Titelles Galiot puppet company is also planned.  There will be performances at 12 noon, 1 pm, 4 pm, 5 pm, and 6 pm.

Once again this year, the City Council is organising a rose-selling initiative on 23 April at the same time as the open day, in the entrance courtyard, from 10 am to 8 pm.

All of the proceeds will go to non-profit organisations. The organisations participating in the initiative this year are part of the Network for Children's Rights, and they are:

The 69th display of sardana dancing by the Sant Jordi dance group will also be taking place in Pl. Sant Jaume, at 7 pm, with music from the La Principal de la Bisbal ensemble.