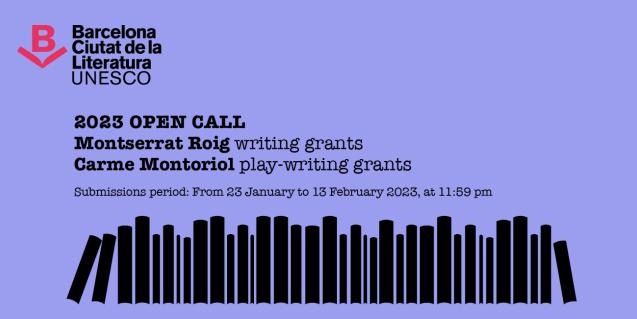 Applications can be submitted until 13 February.

The Barcelona City of Literature UNESCO programme of the Barcelona Institute of Culture opens the calls for applications for the Montserrat Roig and Carme Montoriol Grants 2023.

The Montserrat Roig Grants or Awards are aimed at writing projects in any literary genre (narrative, poetry, essay, chronicle, memoirs), and applicants must be authors who write in Catalan or Spanish and who have published at least one book. There are a total of twenty grants, and genre and language balance will be taken into account. The grant recipients will be given two months in a unique space in the city to develop their writing project. They will receive an endowment of €3,000. The workspace will be available in two periods throughout the year: between March and June 2023 (spring shift), and between September and November 2023 (autumn shift).

The Carme Montoriol Grants or Awards are grants for writing plays aimed at playwrights writing in Catalan or Spanish who have premiered at least one play on the professional circuit in the last five years. Four grants are available in each edition, divided into two rounds of two grants. As in the case of the Montserrat Roig Grants, those selected will receive an endowment of €3,000 and will have a space for two months in which to develop their playwriting project.

In the case of the Montserrat Roig Grants, the spaces available are within the following facilities:

As for the Carme Montoriol Grants, the spaces will be:

The deadline for submitting applications is from 23 January to 13 February. For full details of the calls for applications, click here.