Free for children under 11 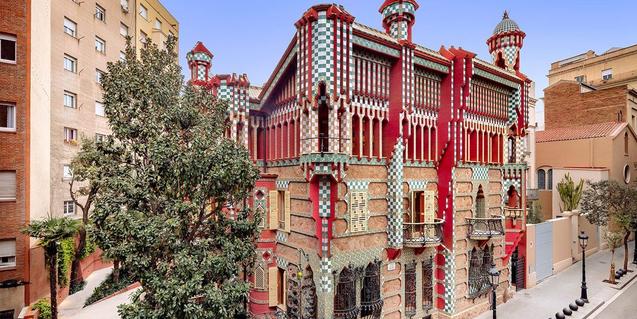 ‘A thousand olfactory images!' is part of the festival LOOP from video art, while 'Smell as an instrument of inspiration' gathers the works of the finalists of the III Premi Internacional Nasevo.

The Casa Vicens Gaudí is hosting, until 8 and 12 December, two temporary contemporary art exhibitions. Both have been curated by Cristina Agápito, the Ernesto Ventós Foundation art director.

The first exhibition is named A thousand olfactory images!, and is part of the LOOP Barcelona festival, which means that the collaboration between the property of the estate — the Andorran company MoraBanc — and the promoters of the event is now in its fourth consecutive edition. The exhibition brings together video artworks produced by world-famous creators such as Antoni Muntadas, Francesca Llopis and Willi Bucher, together with Maggie Cardelús, Albert Merino and Fleur Noguera – all of them from the olorVISUAL collection of the previously mentioned foundation. Its name references the phrase the essence creator and patron Ernesto Ventós shouted every time he connected, through his olfactory memory, with some works of video art that caught his interest.

The second exhibition revolves around Smell as an instrument of inspiration and consists of the presentation of the 16 finalist works of the third NASEVO International Prize, also promoted by the Ernesto Ventós Foundation. The event aims to generate connections between art, science and technology through olfactory memory, with the intention to evoke memories and lived experiences. The competition is aimed at emerging artists, students and artistic collectives, as well as those from other disciplines interested in the world of smell, who are under the age of 35. The artistic techniques haven't been limited. People have presented oil paintings on linen, markers on glossy paper, cellphone screens on wood, enamel and sprays on canvas, digital collages and even coloured pencils on cotton paper. The prize went to Paisatge fragmentat (I, II, III), by Laia Noal, who captured, on methacrylate, the smells, sensations and textures of the Portbou beach through elements she collected on the field.

Access to both exhibitions is included in the ticket to visit the Casa Vicens. You can check the different price options, which range from 14 to 20 euros depending on whether you go on your own or join a guided tour, here. Choose the option that suits you best!